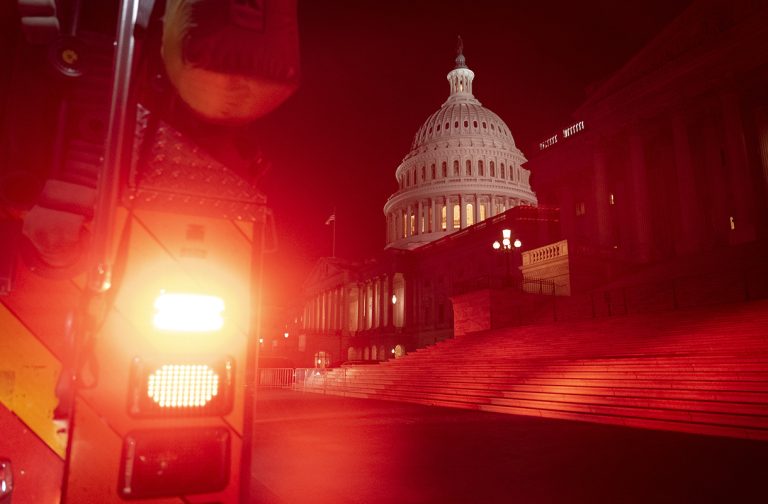 An Arizona man who holed up in a suburban hotel with weapons and food to support other members of the Oath Keepers during the Jan. 6 insurrection was convicted Monday by a federal district court jury of seditious conspiracy and other charges in the case.

Vallejo’s defense attorney, Matthew Peed, said in closing arguments Wednesday that his client was supporting what he thought were peaceful protesters and that he should not be convicted of conspiracy. Peed said then that Vallejo had been painted by prosecutors with a “Twitter version of the truth” that jurors should look past.

But government attorneys said Vallejo played an essential role in the insurrection, standing by as a “quick reaction force” ready to support fellow Oath Keepers as they attacked the Capitol that day.

“What does Vallejo have? Guns and transportation. That’s an agreement of force,” Assistant U.S. Attorney Luis Manzo told the jury during closing arguments in U.S. District Court in Washington on Wednesday.

The comments came at the end of a monthlong trial of Vallejo and three others, the second group of Oath Keepers to be tried for seditious conspiracy and other charges, including conspiracy to obstruct an official proceeding, obstructing officers, destruction of property and more.

The trial of five Oath Keepers last fall ended with the conviction of Oath Keepers founder Stewart Rhodes for seditious conspiracy, obstruction of an official proceeding and tampering with documents or proceedings. All five of the first group of defendants were convicted of a variety of counts in the first trial.

Despite having a reputation as an antigovernment militia, the Oath Keepers describe themselves as a nonpartisan association pledged “to fulfill the oath all military and police take to defend the Constitution against all enemies, foreign and domestic.”

But the group featured prominently in the Jan. 6, 2021, attack on the Capitol as supporters of former President Donald Trump attempted to stop Congress from certifying the Electoral College vote that elected President Joe Biden. Prosecutors said they spent weeks planning to come to Washington, armed and with combat gear, ready to storm the Capitol and “use the firearms in support of their plot to stop the lawful transfer of presidential power.”

As part of the plan, Vallejo and other Oath Keepers on Jan. 6 took four rooms at a Comfort Inn in Arlington, Virginia, where the government said they stored firearms and 30 days of food. Prosecutors said they were part of a quick reaction force “awaiting a call to bring the weapons to the co-conspirators.”

In his closing arguments to the jury, Manzo highlighted messages that Vallejo posted in an Oath Keepers group chat as proof of his intent to deliver an arsenal on demand to those at the Capitol. “QRF standing by at hotel. Just say the word…,” said one message from Vallejo. Other messages said “We’ll be back at 6 am to DO IT ALL AGAIN” and “We are going to probe the defense line.”

The government also pointed to comments by Vallejo about “guerilla war,” about using waterways to get into the city if bridges from Virginia were blocked and to FBI tracking that put him at the Capitol on the morning of Jan. 7 “staring down soldiers of the National Guard,” in Manzo’s words.

“This is life or death for Mr. Vallejo,” Manzo said, telling jurors that Vallejo was one of many across the country “hooked into the Oath Keepers ideology.”

But while Manzo described the defendants as a close-knit band of insurgents that talked together and acted together, Peed noted that Vallejo never set foot near the Capitol or delivered weapons as the government claims. He argued that there is not even proof that his client brought the weapons to the hotel.

Peed said Vallejo was not there to take part in an insurrection, but was in Virginia to provide food and transportation for what he thought were peaceful protestors. He pointed to texts in which Vallejo said he planned to go to a campground and play the part of what Peed called “the humble cook” for the demonstrators.

He accused the government of building a case based on cherry-picked evidence taken out of context. Peed argued, for example, that Vallejo’s “we’ll be back” message was a response to “ticked-off patriots” who he said Vallejo believed were marching to the Capitol rather than storming it.

Peed described Vallejo as “someone who wears his heart on his sleeve and has no guile,” noting that he rejected Rhodes’ call for the Oath Keepers to delete their messages from the chat.

“Oh, I got that (call to delete evidence) but I didn’t do anything wrong and I was at the hotel when things got wonky,” Vallejo texted to Rhodes, according to Peed. He quoted a Vallejo text that he stayed in the chat because “running and hiding is what GUILTY people do.”

The current trial began Dec. 12 and all four defendants were represented by their own attorneys, each of whom presented closing arguments Wednesday. Peed said Monday that he planned to challenge the verdict.