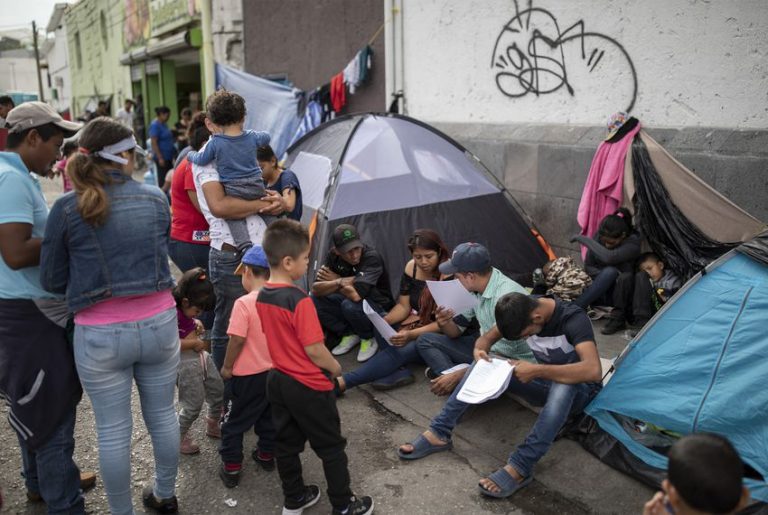 The on-again, off-again fight to end the Trump-era “remain in Mexico” policy is on again, after the Supreme Court said it will review lower court rulings that have forced the Biden administration to keep the program in place.

The Supreme Court agreed Friday to hear the Biden administration’s appeal of the policy, which forces migrants to wait across the border while seeking asylum. The court said it will hear the case in April, which means a ruling will likely be handed down by summer.

Immigration advocates said Monday they are “cautiously hopeful” the court will allow the administration to end the program that they say exposes migrants to dangerous and squalid conditions in encampments south of the border.

“You don’t want to be too hopeful on immigration, but it’s hopeful that the Supreme Court is agreeing to hear the case, that the administration is pushing forward to make sure to end this practice,” said Jose Patiño, the education and external affairs director of Aliento, an Arizona-based immigrant-rights advocacy group.

The Migrant Protection Protocols, also known as the remain in Mexico policy, was started under former President Donald Trump in January 2020. Under the policy, migrants who show up at the border seeking asylum are allowed to apply, but forced to head back across the border to wait for a decision.

Shortly thereafter, the Department of Homeland Security cited the COVID-19 pandemic to begin enforcing Title 42, a public health law that allows the U.S. to turn back immigrants on health grounds.

The Biden administration has continued to enforce Title 42, but DHS officials ordered an end to MPP on Jan. 20, 2021, the day Biden took office. By then, 12,211 migrants had been enrolled in the MPP, with 1,046 of those in the Tucson sector and 306 from Yuma.

DHS Secretary Alejandro Mayorkas followed the January announcement with a June order that spelled out the administration’s reasons for canceling the program, which he said endangered migrants, was ineffective and which drained resources from other agency operations.

The states of Texas and Missouri sued to keep the policy in place, arguing that their budgets would be burdened by a flood of immigrants if the policy was lifted and that Mayorkas had not laid out sufficient reasons for canceling it. A federal district judge agreed, ordering DHS to keep enforcing the program until it could provide a better explanation for canceling the program – or until Congress gave it enough money to detain every migrant who showed up at the border.

The court’s order was appealed all the way to the Supreme Court, which refused to step in to the case at that time.

DHS said it would keep enforcing MPP under court order, even as Mayorkas prepared new documentation to justify ending it. The program was briefly delayed – leading critics to accuse DHS of dragging its feet – while the U.S. negotiated with the Mexican government, which agreed in November to start accepting migrants again once the U.S. made improvements to the treatment and care of migrants.

“We have thousands of immigrants seeking asylum, crossing through the border, and as they go in, they’re sent back and they’re waiting in Mexico and while they wait in Mexico, there’s very little services that they receive either from the Mexican government or from the US,” Patiño said.

Mayorkas’ new memorandum was issued in October, but the 5th U.S. Circuit Court of Appeals was not swayed and ordered the Biden administration to keep MPP in place. That led to a second appeal to the Supreme Court, which said it would hear the case this time.

Yael Schacher, the deputy director for the Americas and Europe at Refugees International, said there is a greater chance the court will rule in the administration’s favor this time because it is challenging a narrow part of the lower courts’ rulings.

“(The administration) is not getting into the immigrant rights arguments here, it’s not actually getting into arguments about whether or not remain in Mexico is a violation of the right to asylum, it’s not even going there,” Schacher said. “It’s basically saying, ‘The state of Texas can’t tell us what to do on this … and they’re determining our relationship with Mexico.’”

But Schacher said if the Supreme Court upholds the 5th Circuit ruling, the MPP will become a “fixture” of immigration policy.

“The state of Texas is arguing that the administration has two options under the immigration statute,” Schacher said. “It can either detain everybody who comes to the border who was not clearly admissible and if it can’t, if it’s not going to detain people, then it has to send them back.”

Schacher said that expanding the number of detention facilities to handle every migrant is not possible, and that Title 42 does not allow the detention of migrants deemed a health risk.

But Patiño said that if the Supreme Court rules in favor of the administration, it will create a foundation for immigration policy that activists can help build upon.

“Often when you have new administrations and new courts or a new Congress, it’s hard to find your foothold … so I think this will help us move forward with Title 42 and other cases that are going on,” Patiño said.

Schacher said Refugee International plans to file a brief in support of the administration, but she’s not entirely sure where the court will fall on the issue.

“It’s a little bit of a wild card what’s going to happen just because of the way this case is coming to the Court,” Schacher said. “I think it could go either way.”

PrevPreviousOpinion: Are Democrats Kicking Away Their Future? – Pat Buchanan
NextOpinion: Fear and Prejudice Drive Our Bail System – Inside SourcesNext