Badgers Advance With 14-6 Win Over Bears: Rivals Meet in playoffs for first time 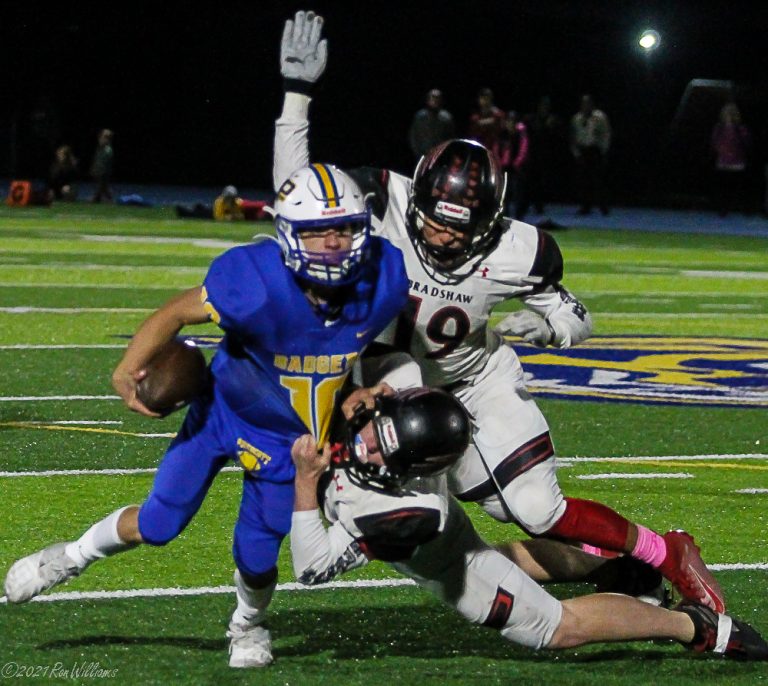 The Prescott Badgers are moving on to the quarterfinals of the AIA Division 4 state playoffs with an intense 14-6 win in a hard-hitting battle over the Bradshaw Mountain Bears.

For those of you who need a brief history lesson, this is the first time Prescott has hosted a playoff game since 1993, first playoff win since 2008. and the first time the two rivals have ever met in the playoffs.

It was just two weeks ago that Bradshaw Mountain came to town and put the hammer down on the Badgers in a lopsided 24-6 contest, knocking out Badger starting QB Alex Vaughan in the process. The rematch showcased a new wrinkle with sophomore quarterback Jaxon Rice getting his opportunity and proving his worth to the Prescott offense.

“We knew we had to change our approach coming into this game with Bradshaw, and it worked out,” said coach Branden Johnson. “I’m excited and proud of our team. They played hard and stayed focus throughout. Jaxon played great for us tonight like we knew he could.”

A very good spirited crowd was on hand, dressed for the occasion, to see this second rivalry matchup of the season.

The Bears offense struggled much to the affect that the Badgers had done against the Bears two weeks ago. It was like a heavy weight bout as the two teams fought to establish offensive rhythm.

The first three possessions, two by Bradshaw, gained minimal yardage that were followed by punts to each side of the field. Prescott’s offense put together a strong drive towards the end of the first quarter, resulting in the first score of the game brought about by a pair of sophomores. Quarterback Jaxon Rice connected over the middle on a 39 yard pass play to Isaac Muffey.

The second quarter was a grind as both teams had some plays of success, but ultimately not reaching the goal line. The Bears missed a golden opportunity, but QB Grady Rose had too much zip on the ball, missing a wide open Tanner Mitchell over the middle in Badger territory.

The teams went to the locker room at the half with Prescott leading 7-0, but there was still a lot of football to play.

The Bears would score their only points capitalizing on a Badger fumble. Prescott lost the ball when Cody Leopold got held up and the ball got pulled out. The next play Malakai Stephenson scored on a 20 yard run down the near sideline. Tanner Mitchell just missed the extra point, leaving the score at 7-6 with 11:10 left in the third quarter.

Prescott responded moving down the field in less than three minutes, scoring once again through the air, as Rice hit Jake Wright on a 20 yard touchdown pass. Cole Gross added the PAT to lead 14-6, but it was still a one score contest. As the night continued to cool down, the intensity kept on rising.

Bradshaw Mountain could not get out of their own way, and the Badger defense made the plays when needed.

Defensive standout Landen Francis, who wreaked havoc on the ball carriers, said, “We had a good week of practice and knew what we needed to do. They are a tough team and we needed to bring it on every play. We wanted this one after what happened last time.”

Bradshaw Mountain got the ball back with 3:30 left and at their own 4 yard line after a great punt by Ryder Thornbury. Needing to go 96 yards, the Bears got busy. Grady Rose connected on passes to Malakai Stephenson and Tanner Mitchell. Elijah Acuna, who absorbed some hard hits, had a pair of good runs to move the ball down the field. The Bears last chance with about a minute to play, but the Badgers defense held, turning the ball over on downs. A pair of snaps ended the game and a jubilant bunch of Badgers celebrated.

Jaxon Rice, who has thrown for 6 touchdowns on the season, said, “We played our butts off and had fun tonight. The guys up front did a great job giving me time to find a receiver and make some plays. Now, I am looking forward to getting back out there next week.”

When asked about the matchup next week, Johnson said, “We scrimmaged Poston Butte in August, and coach Collette was there a year before coming back. He knows their head coach and defensive coordinator very well, so this will be fun to go down there and see what we can do. It’s going to be a heck of a game.”

Poston Butte is (9-2) with both losses coming against the top two teams all season in Division 4. Those teams, Cactus and American Leadership Academy at Queen Creek, moved up into the Open Division for the playoffs.

A long distance road trip did not bother the Volunteers, as they made the long trip from Kingman to upset the #6 team. Apache Junction had no answer when it came to stopping the Lee Williams offense. Their reward is a game back in the valley next Friday at #3 Mesquite.

The Cardinals scored early, and led the entire contest, beating the Panthers to end their season at (5-4). The common denominator going in was that both teams lost to Prescott at home. Coconino lost three of their last four to end the season, while Glendale has now won 10 in a row, after their season opening loss to the Badgers.

Angel Flores threw two touchdown passes and ran for another, to lead the  undefeated Cougars over the Deer Valley Skyhawks . The #2 seed never trailed in the game.

The Dorados made the long trip from Tucson, surprising the #5 Knights pulling off the upset win.

The Wildcats trailed 3-0 before scoring twice late in the second quarter going on to win the game easily, advancing to host Lee Williams next Friday.

St. Mary’s opened up a 21 point first quarter lead, then had to hold on in the final minutes to advance to the quarterfinals. Buckeye ends at (8-3).

The top seed got all they could handle from the lowest seed in the playoffs. Justin Evans scored on a 4 yard run with under a minute to play, as the Broncos avoided a major upset bid by the #16 Northwest Christian Crusaders, who end their season at (3-8)..

4A QUARTERFINAL GAMES-Friday, November 26 at 7pm