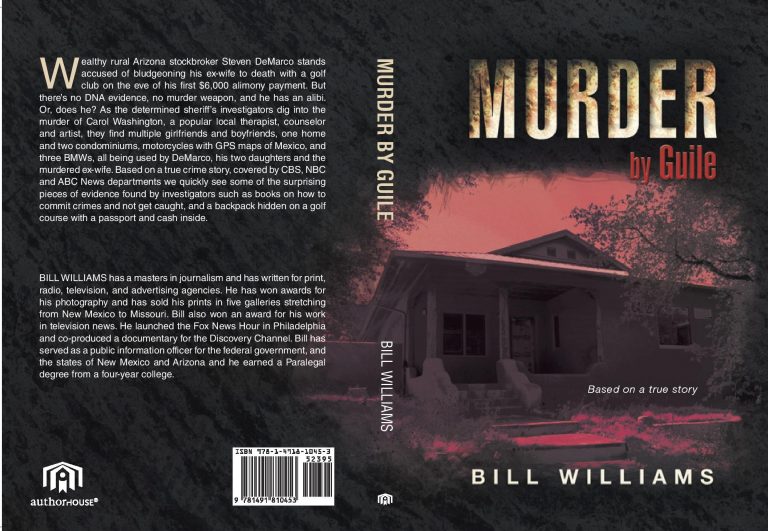 In the summer of 2008, wealthy Prescott stockbroker Steven DeMocker was arrested for beating his wife Carol Kennedy to death in their Williamson Valley home, just north of Prescott, AZ.

Local author and investigative reporter, Bill Williams, has released a second edition of his book titled Murder by Guile.

“Sometimes second editions come out because all copies were sold or hard cover converts to paperback but in this case there is a new ending to the story,” said Williams.

Williams published via Authorhouse in 2013 after the second trial and jury found DeMocker guilty, even though no DNA was discovered, no murder weapon was found, and DeMocker had an alibi. DeMocker had “given” the million-dollar home to Kennedy as part of a divorce settlement and had not physically been in the home for some time. The first was declared a mistrial when DeMocker’s lawyer did the ethical thing and told the judge he in fact had in his possession a golf club cover matching a missing golf club in DeMocker’s bag. Prosecutors claimed it was a golf club that did the bone shattering damage to Kennedy’s skull.

“Local news media really were not covering the ‘end’ of the story, which has changed,” said Williams. “After DeMocker went to the crumbling old prison in Florence, AZ., media stopped covering the case. So they missed the boat in terms of DeMocker’s appeals and the fact that he is no longer in Florence.”

There was a half-hearted update penned by County Attorney Sheila Polk in one of PrescottEnews’ competitors two years ago, but Polk misspelled DeMocker’s first name and characterized Kennedy as an artist and avid gardener. While Kennedy did display her beautiful paintings on one entire wall in the fabulous Van Gogh’s Ear Gallery on Whisky Row in Prescott, Williams’ book reveals her closest friends and protégés would claim her best work was done with her psychology expertise, counseling clients and students at Prescott College.

Williams’ book describes a bungled case and trial including misconduct on the part of jurors who violated the judge’s orders to not talk about the case or read newspaper accounts; Williams interviewed several of the first trial jurors who ratted out their colleagues claiming they would meet after hours to discuss the case and had spouses saving newspaper clippings.

“It was the most closely watched murder ever in this county,” says Williams who has always called it “Prescott’s crime of the century.” Another records bungling that only Williams reported on was the stealing of murder investigation documents by Yavapai County Courthouse employees. The judge ordered all records sealed but Williams sued and got 3,000 pages released to him, as he did in the current trial PrescottEnews and Williams reported on about Dr. Lee Ham, the Prescott/Prescott Valley eye surgeon charged with fraud. An update is forthcoming on that trial when Williams gets his copies of the previously sealed documents. 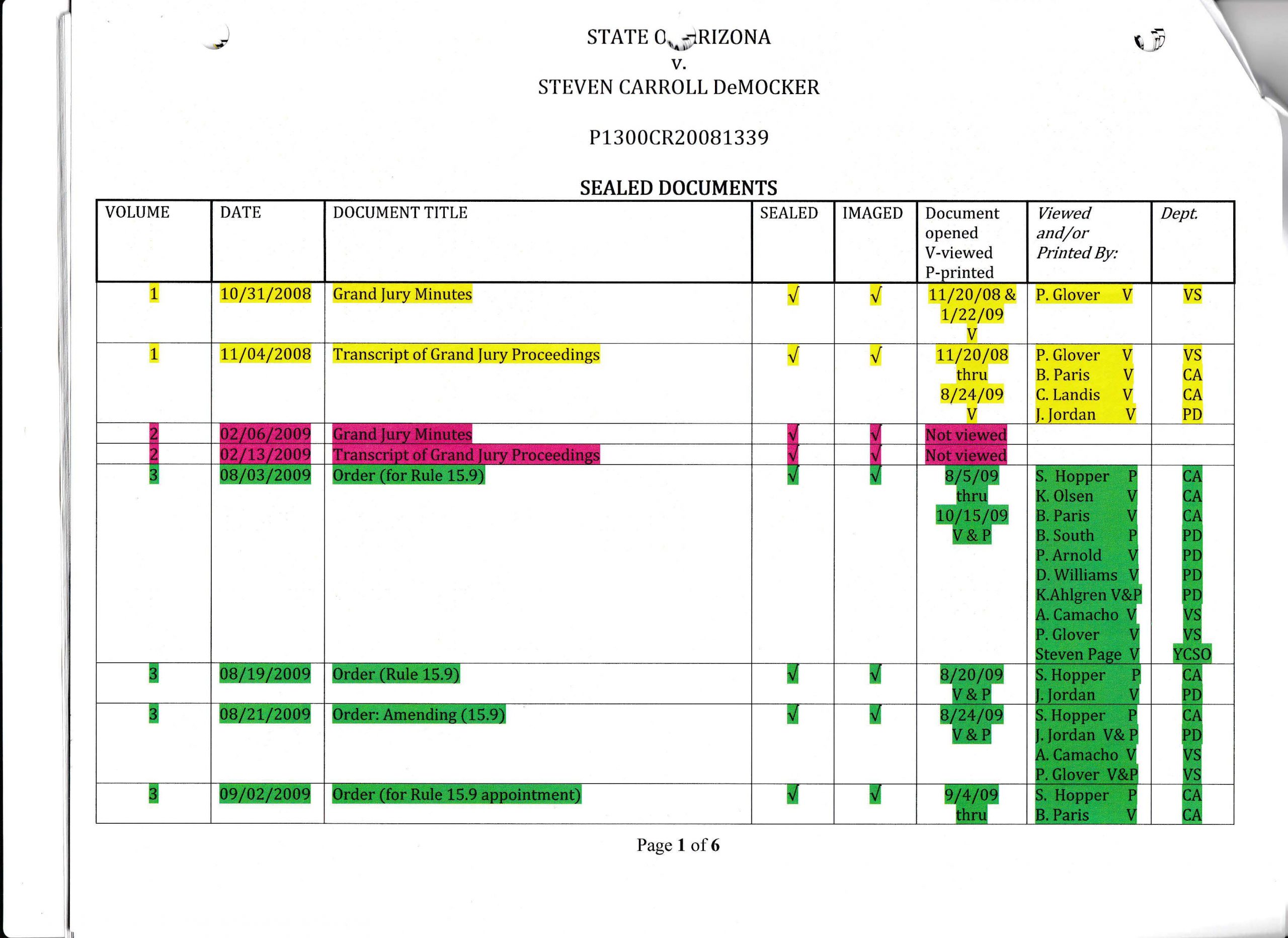 Reporter Williams broke the story of the judge in the DeMocker murder trial ordering the sheriffs to investigate why so many courthouse staffers were peeking at the sealed documents in the case, and they were astonished at how many did. Here is but 1 page of Jarrel’s investigation.

But during the first DeMocker trial, two judges (one died while assigned the case) sealed nearly everything, from everybody. But it was such a salacious investigation that it practically became a sport among courthouse staff to see who could make copies and share the sealed documents. It got so bad according to Williams’ research that a lieutenant in the Sheriff’s office was assigned to investigate who stole or copied what. It was known as the Jarrel Investigation, ordered by the judge; Lt. Jarrel provided a color coded multi-page Excel file to the judge showing dozens of court personnel were standing at the copy machine like dogs at a gravy bowl. The salacious aspects of the story included five DeMocker paramours, some who he was keeping in his Colonnade Condo off Camelback Road in Phoenix. But when it was revealed that Kennedy too had five lovers, the courthouse staff just couldn’t leave the sealed documents alone.

Other bungling’s that caught the attention of courthouse staff included the medical examiner who was accused of sending Kennedy’s severed head to one lab for analysis and the torso to another lab. The M.E. was constantly whining about how bad the technology was in his lab, tucked behind Yavapai Regional Medical Center in an ancient building. During the trial he applied for a higher paying job in Oklahoma but when that lab found out about his whining, they stopped considering him for their job. There was also the ill-equipped Sheriff’s staff that had to borrow a blue light gadget from Phoenix P.D. because they didn’t own the gadget which shows blood on the floor using the luminol process.

And there was a legitimate suspect living in the guest house 50 feet away from where Kennedy died but Deputies never “looked at” him. He was allegedly selling pharmaceuticals by way of a gang in Phoenix, out of the Williamson Valley guest house. The detective novel “has legs” Williams has contended. More like octopus tentacles and that is why 48 Hours and Dateline did one-hour documentaries on it. One program featured a show down at the front door, videotaped by DeMocker kin where family members confronted the guest house dweller live on tape yelling at him to fork over the keys to the guest house and get the heck off the property a.s.a.p.

Within a couple weeks the man was dead in a cheesy Prescott apartment. The same M.E., along with Prescott P.D., declared it suicide; but undeterred, Williams demanded under the state open records law, all of the reports on the incident. He became the only reporter to weave that aspect of the case into freelance news articles, his book, and term papers for his third college degree – Paralegal Studies from Yavapai College.

“It was unconscionable, to buy into a ruling of suicide,” Williams claims, “when you see that multiple spent shell casings from multiple guns were found littered around the man’s apartment which looked like a new version of the O.K. Corral.” The dead man’s body was found on the floor with a bullet hole to the heart. The bullet was found in the crawl space under the apartment and a dining table chair was found upright in the middle of the man’s bed, three feet from the body. Psychiatrists told Williams that  men do not kill themselves with a bullet hole to the heart. No one covered that story or angle but Williams.

There was also local law enforcement reliance on state troopers and other out-of-town cops because, whether a sheriff’s deputy or police detective, Williams claims in his book that neither were up to the task. The salaciousness of the saga was steamy enough to cut with a knife, according to Williams and that’s why he included sexy letters written to DeMocker while he was being held in the county slammer from women who wanted his body.

But now DeMocker’s good looks are gone; his new mug shot and booking photo in the Arizona Corrections Department files shows a fat-cheeked man with less hair and thick spectacles; a far cry from the million dollar stockbroker who used to inject god knows what (according to court records) to keep his five girlfriends happy.

Williams claims that no one makes a million bucks selling stocks in Prescott; Wall Street maybe. Not Prescott. And the only document the Courthouse has refused Williams, even in spite of Williams asking the state Appeals Court to override the local judge’s decision – is DeMocker’s “book of business” – his list of clients and amounts he sold, or stole from them. A look inside the lawyers’, prominent local residents’, and possibly judges’ (client list) might explain a lot or raise suspicions about who really killed Kennedy. But no one can have the list, except maybe the dozens of courthouse staff who may have copied that too, claims Williams. Williams got a tip that DeMocker was skimming profits in order to keep up with his $13,000/ month in cost of living (for all the girlfriends) so he filed a Freedom of information Act request with FINRA (Financial Industry Regulatory Authority) which investigates sticky-fingered brokers and sure enough, during the murder trial, they were investigating multiple complaints by Prescott area clients who claimed DeMocker was syphoning profits.

And speaking of profits, DeMocker will go down in history as the only Arizona murder suspect ever to collect on his ex-wife’s million-dollar life insurance while being tried for murder – just another of the eight tentacles, says Williams, who is so passionate about that angle of the story that he posted, on YouTube, a secretly recorded conversation between DeMocker and his daughter, on the jail house phone system describing how the money would come in and was to be disbursed.

And 48 Hours stole his idea and used the audio angle in their documentary – a year after Williams published the first edition of Murder by Guile.

“I have more information than any other reporter,” claims Williams. “When I won in court, the judge ordered the county to release about 3,000 pages of documents to me, some on disks, some hard copies. Some include the medical chart and hand-written notes of Kennedy’s psychiatrist that describe Steven’s alleged mental torture and hundreds of pages of Grand Jury testimony, which simply never gets released in America.”

Former assistant County Attorney Jack Fields was tasked with the job of giving the documents to Williams and to this day, Williams says he still has a respectful working relationship with Fields who is now assistant county administrator for Yavapai County.

“After obtaining all those documents and interviewing jurors in the first trial, I am still not sure Steven is guilty,” claims Williams, who wrote to DeMocker in prison. “Every week 48 Hours and Dateline broadcast a whodunit that ends up convicting someone with purely circumstantial evidence. DeMocker won’t grant me an interview but my door is open to him and his family to hear his side of the story and maybe even pen a third edition.”

Williams earned a masters’ degree from Iowa State University in mass communications and journalism, and an undergrad degree in the same from the Cronkite school at ASU. Murder by Guile can be found on Amazon and Barnes and Noble.

PrevPreviousState Leaders to Bring “Budget Roadshow” to Prescott
NextCosts of the Afghanistan war, in lives and dollarsNext