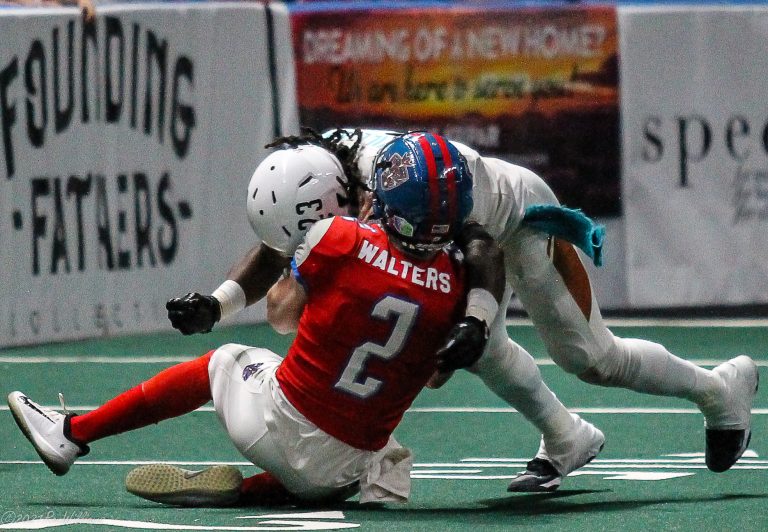 Luck of the draw, or not as the NAZ Wranglers battled the top dog of the IFL, the Arizona Rattlers and dropped a 51-20 season opener at the Prescott Valley Events Center, Sunday afternoon.

A very good crowd stayed from start to finish to enjoy the game and festivities as the Wranglers and Rattlers brought us all another step back to normalcy.

“This is a lot of fun, getting back in here to see a live sporting event. I had a feeling there would be a lot of people here today. Good for everyone who came out today.”, said Jennifer White.

The Rattlers struck early and often building a commanding 21-0 lead after one quarter. Drew Powell guided the Arizona offense like a well oiled machine. When Powell was not picking apart the secondary, he was keeping the ball, that resulted in a pair of rushing touchdowns. running back Nick LaSane was a powerful force on the ground, scoring three touchdowns.

Wrangler quarterback Verlon Reed Jr. was pressured for much of the first half, giving way to Caden Walters for the final series of the first half. Walters led the Wranglers down the field but his pass into the end zone at the end of the half was intercepted.

The second half was a much more even contest as Rattlers coach Kevin Guy opted for their reserves and quarterback Ben Holmes.

A promising start to the second half for the Wranglers as Walters scored on the opening possession when he zig zagged  his way on a 15 yard scamper for the touchdown.

For most of the remainder of the game, Wrangler offense could not find a rhythm, which cost the home squad time and time again. Credit that to the Rattlers relentless defense.

The final score of the game came when Walters hit a wide open Terrance Bynum in the end zone on a 9 yard strike.

The last time the Rattlers played was in the IFL Championship in 2019, when Arizona lost to Sioux Falls 56-53 in Glendale. Arizona will travel to meet the Storm next Saturday at 5:10pm.

The Wranglers will look for their first win as they visit the Bismarck Bucks on Saturday at 5:05 pm.