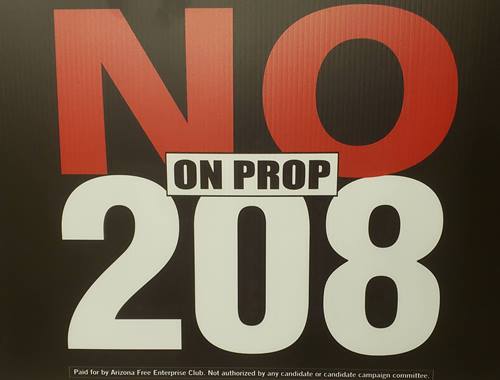 In case you missed it, this column by Chad Heinrich, Arizona state director for the National Federation of Independent Business, appeared in the October 2 edition of the Phoenix Business Journal.

How many times have you heard “buy local, support your local businesses,” or any similar version? If you truly support small business, then join me and thousands of Arizona small business owners in voting “no” on Proposition 208.

The drafters of Proposition 208 may have brazenly believed voters in Arizona could be easily hoodwinked in supporting what proponents are selling as a tax on the other guy. But Arizonans who support small business see this foolhardy proposition for what it is: The Small Business Destruction Act.

The campaign’s core underlying message is: “Vote yes for this tax because you won’t pay it.” Something similar to the phrase, “a tax on thee is better than a tax on me” Not only is no one buying this argument, but it also has a political tone deafness in our state, which is probably explained by the bulk of the campaign’s more than $4.6 million in funding coming from out-of-state labor unions and special-interest groups — most from a group in Portland, Oregon.

Tax experts agree that, if adopted, the proposition would be the largest tax increase in Arizona history. Economists peg the job losses at a minimum of 124,000 by the 10th year of implementation. Arizona would land on the top 10 list of highest income tax rates nationally. These are short-term realities that would immediately impact Arizona working families. As severe as these impacts are, the long-term effects are even worse.

Today, Arizona’s income tax rates are competitive — both regionally and nationally — when compared to other states. Arizona’s competitive tax structure puts the state on a short list when businesses and individuals look to leave their high-tax home state and set their sights on the Southwest. The income these new residents and businesses generate increases the taxable income base Arizona has available to help fund the state’s core responsibilities through the current income, sales and property tax.

Reports from the Internal Revenue Service show that in the past five years the adjusted gross income in Arizona has increased over $5 billion due to people moving from California and Illinois to the Grand Canyon State — that’s $5 billion more in taxable income for Arizona from just two states. These are increases in the tax base Arizona has available for funding education and other state priorities. It’s plainly irresponsible to risk the stable growth we experience from our current income tax structure in an attempt to put the squeeze on small-business owners and those in the highest income bracket.

Voters and elected leaders have committed billions to education over the past few years: $3.5 billion from Proposition 123; a 20% average statewide pay raise for K-12 teachers fulfilled this year; and $380 million in new funds from the Legislature in this year’s budget, even in the face of the budgetary uncertainty due to the pandemic. In all, over the past six years, total K-12 funding has increased by almost 5% each year. The state’s average per-student funding is up by more than 30% over the same period.

Our current state personal income tax structure is a proven and reliable cash cow for Arizona in a growing economy. Proposition 208 risks upending Arizona’s economy with an idea that is sure to kill small business and put a large part of the tax base that supports education in jeopardy.

Chad Heinrich is Arizona state director for the National Federation of Independent Business and managing partner of Heinrich LLC, a public affairs company.