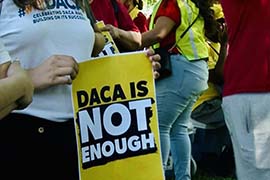 It wasn’t a great job – dishwasher – but Mario Montoya was happy because it was his first job and because he needed money for the prom.

But Montoya was happy for another reason, too: The undocumented Mesa resident was only able to work because he was one of the first beneficiaries of the Deferred Action for Childhood Arrivals program when it took effect 10 years ago.

“My life would have been completely different if DACA never came to life,” said Montoya, now 24 and a college graduate. “I don’t know if I would’ve gone to college, or finished it, or thought about it. I wouldn’t be able to work to provide for myself.

“Not sure what my mental state would be as well, to constantly deal with the thought of being deported at any second,” he said this month.

DACA, which protects undocumented immigrants who were brought to the U.S. as children, was enacted on June 15, 2012, by President Barack Obama. In the decade since, the policy has protected as many as 800,000 migrants, including more than 23,000 currently in Arizona.

Critics attacked it as executive overreach and said it would just encourage further migration. But the policy has survived years of legal and political efforts to undo it – as well as the COVID-19 pandemic that made renewals a challenge for recipients.

DACA was initially enacted as a stopgap measure to protect immigrants while Congress worked on comprehensive immigration reform. But Congress never agreed on such legislation, and advocates say it’s time to make the temporary policy a permanent law.

“A permanent solution is due, way overdue now,” said Maria Jesus Cervantes, vice president of public relations for Chicanos Por La Causa. She said that with “the DACA anniversary, there’s a national renewed opportunity to get these issues back in every media outlet, and meeting rooms and board rooms for discussion.”

That’s easier said than done. Congress has tried since 2001 to pass various versions of the Dream Act, which would extend many of the provisions of DACA and sometimes more, like a path to citizenship, which DACA does not allow.

The latest version is the American Dream and Promise Act of 2021, which passed the House with every Democrat and nine Republicans in support in March 2021. That bill has since stalled in the Senate.

In the meantime, immigrants like Montoya look to DACA for protection.

Since 2012, U.S. Citizenship and Immigrations Services has approved 835,097 initial applications for DACA protection, Some experts say the actual number of DACA recipients is probably lower, because the USCIS number includes double-counting of those who let their status lapse before reapplying.

“You can’t compare numbers in full,” said Michelle Mittelstadt, of the Migration Policy Institute. “If you had DACA in 2012, then for two years you did not renew your DACA status, but then popped in 2016, USCIS would count it as the initial applicant.”

As of December, the latest month for which numbers are available, there were an estimated 611,470 DACA recipients in the U.S., with 23,090 of them in Arizona.

Mittelstadt said there are other reasons the numbers may have gone down, such as a DACA holder marrying a U.S. citizen during that time and getting a green card. “About 76,000 DACA recipients at some point during the process were able to get green cards and would no longer need it,” she said.

Another challenge has been COVID-19, which led to a backlog in processing DACA applications and mailing out the cards recipients use to prove they are covered.

“It was definitely a struggle for a lot of people, because they weren’t renewing them as fast because of COVID,” said Michael Browder, a DACA coordinator for the Arizona Dream Act Coalition. “They didn’t have enough staff working on them so they were backed up for like two years.”

Renewals are important – DACA coverage only lasts for two years at a time – and expensive.

In addition to coming up with the fee, recipients have to remember to apply before their current coverage expires. For those who work and are dependent on DACA, it’s important to stay on top of it, Browder said.

“A lot of jobs will let you stay if you show you’ve applied for your renewal, but a lot of them don’t. They want the actual physical DACA card,” he said.

Montoya has been lucky enough to have the money for renewals and organized enough to keep on top of it. But he said he is frustrated for those who are currently forced to wait, after a federal judge in Texas ordered USCIS to stop processing new applications.

For critics of DACA like Ira Mehlman, the judge made the right call.

Mehlman, spokesperson for the Federation for American Immigration Reform, said that just because a person was brought here without choice by their family, it does not mean that person should be rewarded.

“You can’t condone it, you can’t reward it,” he said of illegal immigration. Mehlman agrees that most DACA recipients are good, decent people but that “doesn’t protect you from the compliance of the law.”

“Every person, every parent understands that their actions are going to have consequences on their children, and when they violate laws it is inevitably going to harm the interests of those children,” he said.

Montoya does not understand that reasoning.

“It doesn’t make sense to push people that want to be part of the community and want to help our economy, pay their taxes and take them away from the only place you know,” he said. “It’s inhumane.”

Montoya, who graduated this spring from Arizona State University with a degree in interdisciplinary studies with concentrations in business and political economy, says that DACA and the work authorization it brought has opened so many doors.

“I remember taking a dishwasher position at a buffet, and it was a lot of dishes, and I would be coming home just drained in dishwater,” said Montoya about that first job and the certainty of a regular paycheck.

DACA applicants have to have been brought here as children, remained here continuously, have a clean criminal record, and have to be in school or have graduated. In exchange, they get documentation that lets them work, get a driver’s license and – most importantly – the comfort of knowing they do not have to live in fear of being deported to a country most don’t even remember.

Montoya acknowledges that DACA was supposed to be temporary, but realizes 10 years later that something needs to change.

“There needs to be a permanent solution for DACA recipients, this country is lacking a comprehensive immigration reform,” he said.

Montoya said DACA has brought other changes. He grew up in a “don’t ask, don’t tell” era, when people did not reveal their immigration status, but people are more open with their status today.

“It’s a wonderful shift that people are more brave and open about it,” Montoya said.

And DACA has opened doors that helped him reach his goals, something he wishes for others.

“The opportunity itself can change your whole life,” he said.

PrevPreviousOpinion: The GOP needs to get beyond 2020
NextOpinion: The Beginning of the End – Inside SourcesNext