‘Living in the hell’: Interpreter is one of 300+ Afghan refugees resettled in Arizona 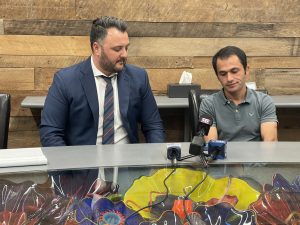 For more than a decade, Zabi had tried to leave his native Afghanistan, where he worked as an interpreter for the U.S. military. His situation rapidly deteriorated in August, when U.S. forces left and the ruthless Taliban quickly regained control.

Zabi spent nearly a week outside the chaotic airport in Kabul, hoping to be let in and fearing for his life the whole time.

Two weeks ago, with help from Rose Law Group in Scottsdale, Zabi and his fiancé touched down in Tucson, where they will make their new home.

Zabi spoke at a news conference this week with immigration attorney Darius Amiri, who took on the case pro bono and is the son of an Iranian immigrant.

“We didn’t obviously anticipate the Taliban to make the kind of headway they did after we pulled out, and Zabi was really at a big risk and feared for his life,” Amiri said.

“Brutal people took over Afghanistan,” Zabi said, “the way that they treat the people, and they don’t have a really good behavior with the people. So that’s why people, you know, are not seeming and feeling safe.”

Amiri said a friend in the military connected him with Zabi in 2018, who at the time was trying to obtain a Special Immigrant Visa available to Iraqi and Afghan interpreters who helped U.S. forces. They reconnected in August, when Kabul fell.

A U.S. State Department spokesperson told Cronkite News that as of late October, more than 300 Afghanistan refugees have resettled in Arizona. At least 1,600 are expected eventually, according to the Arizona Department of Economic Security.

Zabi said the Taliban captured him in Panjshir Province but he eventually made his way to Kabul, where Rose Law Group had arranged military transport out of the country – if he could get into the airport. He spent six days and six nights waiting in the frantic crowd outside, hoping a Marine would let him in. After several attempts, he finally made it inside, along with others desperate to flee.

At one point, Zabi said, he doubted he’d be able to make it onto the plane taking him to Qatar.

“I feel proud, and I feel really, really safe,” he said, adding that he dreamed of coming to the United States for almost 10 years and tried to flee Afghanistan in 2012 and 2013.

“Honestly, the most important thing was for me to meet Darius because he’s been helping me a lot when I was in Afghanistan, when I was outside that Kabul airport,” Zabi said.

The scene around the airport was frightening, Zabi recalled. People were wielding guns and spraying pepper spray as he tried to get past the Taliban. His fiancé didn’t think Zabi’s connections in America with the law group were real, but he kept a positive attitude and didn’t give up.

“When someone helps you from far away, and you see him in front of you, and it’s like, makes you, you know, emotional.”

“I don’t think Afghanistan would see peace,” he said. “People have to …hope and hope for a bright future, otherwise, it’s impossible.”

Amiri said Zabi isn’t the only Afghan his firm is helping.

“They’re fearful of their lives. And he’s the only one who was able to get actually into U.S. custody and past the Taliban and the guards and the checkpoints.”

Amiri said the law firm started a fund to help Zabi – who arrived with only the clothes on his back – with the settlement process, and he and his fiancé now have an apartment in Tucson.

PrevPreviousOpinion: Who Decides What Kids Should Be Taught?
Next7 Trees With Brilliant Fall Color + BonusNext