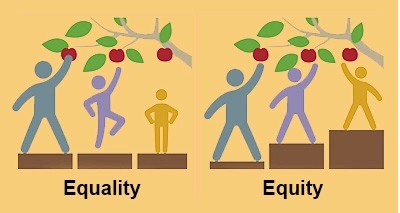 The latest census reports that America’s white population declined for the first time in history. Other groups grew. Non-whites are replacing whites, but the Great Replacement is a “conspiracy theory” if white advocates mention it. To the Washington Post’s Jennifer Rubin — once the paper’s “conservative” columnist — it is “fabulous news.”

This would be hate speech if it were about anyone else. How would Miss Rubin feel about an emerging Palestinian majority in Israel? No people should celebrate displacement of anyone anywhere.

Miss Rubin claims America’s future will be more “diverse” and “inclusive.” However, unless taking power from whites is the goal, what will be better? America has already moved beyond legal equality for non-whites, who enjoy affirmative-action privileges. However, blacks and Hispanics still can’t perform at the same level as whites and Asians, but instead of ditching the false premise of “equality,” the new goal is “equity” — equal outcomes. 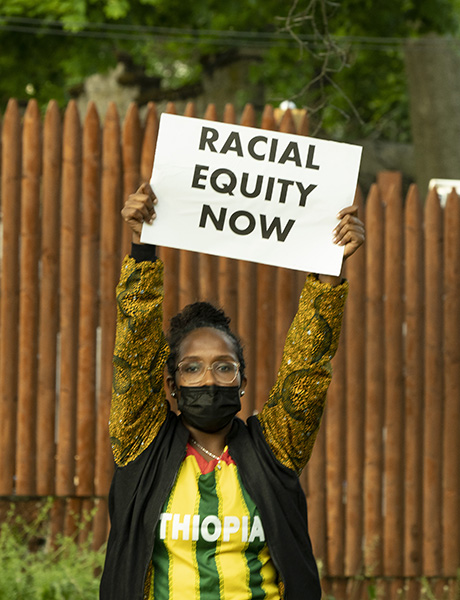 A demonstrator holds a sign at a rally to remember George Floyd. (Credit Image: © Keiko Hiromi/AFLO via ZUMA Press)

It’s impossible to know whether leftists believe that “white privilege” or another mysterious force is blocking “equity” despite countless laws, decades of effort, and trillions of dollars. Perhaps some think “equity” is possible. Others may just want power or money. Either way, their tactics will be the same. Standards will have to go; otherwise, the same racial patterns will emerge. Progressives can’t learn.

In Oregon, the Democrat governor recently ended a requirement for proficiency in reading, writing, and arithmetic for a student to graduate from high school. A spokesman said this will benefit “Oregon’s black, Latino, Latina, Latinx, Indigenous, Asian, Pacific Islander, and students of color,” who don’t do well on the test.

Asians can’t pass it? And please note that Hispanics get three separate identifiers, while whites aren’t worth mentioning. Shouldn’t some non-whites resent the suggestion that they can’t be taught to read? Scrapping tests is common. The University of California recently announced it would stop using SATs and ACTs.

Do you remember No Child Left Behind? It was supposed to punish states and school districts that couldn’t get children of all races to perform at the same level. That is impossible, so everyone got waivers and ignored the rules. For decades, the country has been desperate to find a test that blacks can pass at the same rate as whites. Asians do better than whites, so it’s hard to argue the tests are “culturally biased” in favor whites. So the tests have to go.

Oregon children will get worthless diplomas and swell the glut of unqualified college students. On Capitol Hill, the new “infrastructure” bill has millions of dollars for unimpressive and expensive black colleges. Education policy is a cargo cult, in which symbols matter more than the substance. Why not grant all non-whites a doctorate at birth?

Criminals get the same treatment. America is suffering from a historic crime wave. Blacks are ambushing police officers. They are committing brutal crimes against whites. Blacks are also suffering because most crime is within the same race, but many progressives seem to think that what matters most is shielding black criminals.

In Philadelphia, progressive District Attorney Larry Krasner now says police must politely ask criminals to stop committing certain crimes before they take action. These crimes include public defecation, littering in parks, prostitution, aggressive panhandling, disorderly conduct, blocking traffic, all noise violations, and “defiant trespass,” which means staying on someone’s property despite being told to leave. These acts are no longer crimes unless a policeman comes, asks you to stop, and you keep doing it. DA Krasner changed policy on “quality of life” offenses because non-whites were more likely to commit them. There is record-breaking gun violence in the city, so maybe the police are busy, but life will be worse for ordinary people. Mr. Krasner recently won re-election in a landslide.

Political skirmishes in Portland are common, but the city’s violent crime doesn’t get much attention. It’s on track this year to “shatter” its murder record. The usual people are suffering. Portland blacks are 32 percent more likely to be killed than Chicago blacks, and 60 percent more likely than Philadelphia blacks. Officers won’t join a special unit to fight the killings. They shouldn’t. They know they will be reviled for doing their job – arresting a lot of blacks – and more than a third of blacks want to abolish the police. Why protect people who want you gone?

In Atlanta last year, members of the Bloods street gang established a small “autonomous zone” that banned police. Bloods rule ended after an eight-year-old girl was shot to death. Crime is so bad in Atlanta the Buckhead area wants to secede.

In Seattle last year, anarchists set up an “autonomous zone” in which several blacks were killed. Police recently arrested a suspect in one murder, but as far as I can tell, no one has been arrested for shooting two black teenagers at an antifa “checkpoint.” One died, and the other was badly wounded. That crime was chilling and audio is still on social media. Shouldn’t the shootings of two teenagers in an “autonomous zone” be big news? No one seems to be interested. The most detailed follow-up I’ve seen is from a leftist blog post, and the information is unverified. Violent crime in Seattle this June was even worse than it was in 2020. Few care.

Indeed, the Gannett media chain — the largest in the country — has a solution. A black regional editor saw too many black and Hispanic faces on crime pages, so he ordered a “reimagining” of the coverage. Instead of showing mug shots or believing “police narratives,” the chain will offer “context,” identify “trends,” and follow “stories to their end.” In other words, it will smother inconvenient racial patterns.

Information is good or bad depending on its political usefulness. In 2020, the Army stopped using photos when promotion boards made decisions about whom to advance. Photos might invite “unconscious bias” and could keep worthy minorities from getting ahead. The entire Defense Department reportedly did the same. What happened next is exactly what you would expect. Banning photos led to less “diversity” in promotions. The military is a “meritocracy,” Navy chief of personnel John Nowell claimed, but “we want [promotion boards] to consider diversity across all areas.” “I think having a clear picture just makes it easier.” It sure does. Without pictures, you might promote a competent white officer by accident.

Perhaps the perfect example of this determination to ignore reality came with an alarmist report about artificial intelligence. Those in power tell us race is a social construct, but AI can distinguish race easily from basic medical information. This, “experts” warn, could expand existing “health disparities.”

PhD candidate Luke Oakden-Rayner tweeted that AI now has the “superpower” of “racism.” Implicit bias against minorities is so powerful that merely knowing race will hurt non-whites. Will the AI recommend “racist” treatment? But the worst part may be that AI found something that isn’t supposed to exist. Mr. Oakden-Rayner doesn’t want AI; he wants AS — artificial stupidity — so that machines won’t notice things we aren’t supposed to notice. So much for trusting science.

In 2017, the New York Times published an op-ed suggesting that “intelligent” policing tools and data analysis might lead systems to predict more crime in black areas. In other words, AI should not do its job.

Our society deliberately suppresses knowledge about race. This means ignorance about every issue, from education, to defense, to health care. For whatever reason, those who run the most powerful country in the world have decided that ignorance is better than knowledge. Massive repression prevents people from discussing this. The system invents excuses and rationalizations, and uses widespread propaganda to explain why egalitarian policies always fail.

“Disparate impact” set the precedent. If only a few blacks can pass a test, an employer must explain why the test is necessary for a job. That means every meaningful test has to be painstakingly validated; better just junk the test. A court doesn’t have to find discrimination; “disparate impact” is all it needs to find you guilty. Racial “equity” is more important than doing the job.

“There is a great deal of ruin in a nation,” said Adam Smith. America has survived lower standards and fake jobs that appease minorities, but the costs go up all the time. If equity becomes the primary goal and whites are a minority, institutions will be unable to carry the burden dumped on them by swelling numbers of non-whites. If businesses and bureaucracies must pursue “equity” instead of excellence, there’s no reason for employees to do anything but loot what they can, as in most of the Third World and formerly Communist countries. The nation itself will become a ruin.

When egalitarians defeat what they call “white supremacy,” they leave behind desolation. We’ve already seen this in Rhodesia, South Africa, and countless American cities. Those who can, move away, even if they were the ones who promoted “equality.”

Our kin, the indigenous peoples of Europe, face the same opponents and tactics we do. If the West succumbs to “equity,” all the struggles of countless centuries will have been pointless. Even the supposed victors will be squatting in the debris, wailing that their plight is someone else’s fault.

We can’t afford to indulge egalitarian fantasies. The West’s back is to the wall. It’s not just a question of protecting our interests. It’s a question of survival. This degeneration has no endpoint but extinction. The decline will end only when we decide it does.