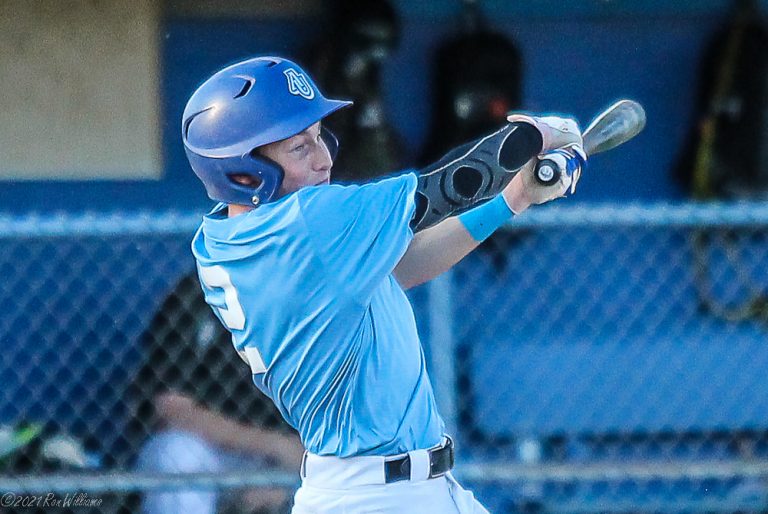 Photo: 2 Slater Krupnick at the plate

The Prescott Roadrunners pounded out a 10-1 win over the visiting Bay Area Force at Prescott High School last night in a Collegiate Summer Baseball League contest.

The Roadrunners improved to (12-3) on the season, by taking a four run lead in the bottom of the first when Trey Becker and Jacob Police both singled, along with RBI hits by Jake Schulz, Cody Brick, and Jack Berger.

Schulz picked up another RBI, along with Ryan Olson to make it 6-0 after just two innings.

Khadim Diaw added the seventh run in the fourth when he walked with the bases loaded. Two more runs came across when Cody Brick picked up an RBI with a sac fly and another run came across on a throwing arrow to extend the lead to 9-0.

Prescott’s Aisea Ahokovi pitched an impressive outing, shutting out the Force through five innings before Jack Berger took the mound.

The Force picked up their only run of the game in the sixth, when Jamir Gibson doubled to right center and scored on a triple by Shamil Youngblood. Berger was able to limit the damage, stranding Youngblood at third.

Former Prescott High School Badger, Slater Krupnick, came in and pitched two innings, striking out the side in the eighth. Before that in the bottom of the seventh, Mr. Krupnick would be most opportunistic with his plate appearance, starting with a walk, followed by a stolen base, advancing to third on a ground out, and scoring on a wild pitch for a 10-1 lead.

Krupnick, who fanned four overall, said, “I hopped up on the mound and felt pretty good. My catcher was calling great spots and great pitches, and with a great sequence. I just had it tonight.”

Ryan Olson closed out the game getting all three batters he faced.

Prescott will face the Force again today, Saturday, and close out their home schedule on Sunday. All games will start at 4pm. The finale on Sunday will feature Prescott High School graduate in 2020, Luke Fredrick as the starting pitcher for the Roadrunners. Admission and parking are FREE!