Nomadland Has No Plot 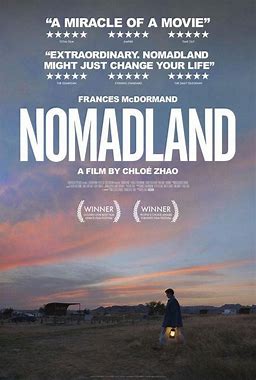 As I’m sure you know, Nomadland has received nearly-universal praise from critics and audience members – currently holding an incredible 94% score on Rotten Tomatoes.

After contemplating what to write about next, I figured, what the heck, everyone else is doing it, so I decided to write a full, in-depth review of the film.

If you’ve read my previous articles, you’ll have noticed that my focus was on the mistakes of modern filmmaking rather than its excellence, so I wanted to do the inverse and check out an acclaimed film to see how good it really is.

Unfortunately, I was disappointed.

Now before you yell at me, I will point out that I do admire Chloe Zhao as a filmmaker.

I’m glad that she’s up for awards, since she has an original perspective that isn’t the same old Hollywood regurgitation. As an indie filmmaker, I welcome as many independent artists as possible to join the industry to save us from the supervillain that is modern Hollywood consumerist greed.

However, with that said, I will now thoroughly discuss Nomadland as a film and leave out the identity politics.

First, what I immediately liked about the film was obviously Frances McDormand’s performance as Fern. She played that character so well that, had I not known who she was, I would have believed that they just found some random wanderer and gave her the starring role for reduced pay instead of hiring a character actor.

Secondly, the direction and cinematography were fantastic. Zhao portrayed this nomadic journey with a true, authentic spirit that’s hard to find these days. The setting and backdrop were perfectly intertwined with the dialogue and mood, and it fell into place as effectively as it could.

Beyond that, however, I felt that the film was lackluster, and I’ll explain why in detail.

The positive qualities that I just mentioned are merely surface value aspects. It’s like looking at a fancy new car – it looks cool, but how well does it run under the hood? In this case, not very.

Not to belittle the aesthetic value of Zhao’s direction, but it takes more than direction to make a compelling film.

My first and foremost criticism right off the bat is that the film has no plot. Sure, you could disagree and say that the plot is about a widow aimlessly traveling in her van across the desert, but that’s not a plot; it’s a story.

For a story to have an actual plot, and for a film to be good, it needs to follow a proper storytelling format, and that’s what the film lacked.

I’m a fan of the late Blake Snyder’s “Beat Sheet,” which is essentially the de facto format that 99% of films use (because it’s synonymous with proper storytelling), and I was initially impressed with Nomadland because one of Snyder’s Beats, the “Theme Stated” occurred where it was supposed to (around the 10-minute mark).

The theme is summarized by Fern’s statement that she isn’t homeless – she’s “houseless.” That key differentiation was the “Theme Stated,” and I eagerly awaited where her journey would go from there.

Sadly, it didn’t really go that far. Sadder still, she was wrong – she is clearly both houseless and homeless since her aimlessness hinders her from truly finding her place. The van that she called her home was just a means of transportation no matter how much she claimed otherwise.

Elaborating on the lack of a plot, there’s something often called the “Hero’s Journey” that’s present in nearly every story ever made.

What this basically means is that the hero/heroine starts in the “thesis world,” which is bad (think Luke Skywalker depressed on a desert planet).

Then an event sends this hero into the “antithesis world,” which is the opposite of the thesis world (Luke Skywalker on a space adventure).

And then, at the end of the story, the hero finally arrives at the “synthesis world,” which is where the thesis and antithesis merge to where the hero has gone from Point A to Point B – from hell to heaven. The hero may have started out as a depressed alcoholic living in a homeless shelter, and then at the end of the film he became an empowered superhero.

The Hero’s Journey of the protagonist essentially transforming from a sad caterpillar to a happy butterfly is what we crave as audience members for the sole reason of wanting emotional satisfaction.

But with Nomadland, there was no Hero’s Journey – no transformation (well, barely). Our heroine, Fern, started out as an aimless wanderer, and ended up… almost exactly the same.

There was no catalyst that took her from the old world to the new world, since we joined in during the new world and stayed there indefinitely. There was no lesson learned, since she didn’t really evolve as a person beyond just being able to let go of her old life – and there was no true satisfaction at the end, since it was open-ended, vague, and depressing.

The character development was basically how Fern starts out as a troubled woman who’s having issues coping with her grief to a woman who’s over her grief, which is shown at the end when she’s fine with letting go of the stuff in her storage facility.

And while that is a decent milestone for a character like that, it wasn’t enough. She’s still aimless, just with less baggage (pun intended). She never solved her actual problem of feeling like a stranger in her own life.

And let’s just be real, her mentality made no logical sense. McDormand played Fern incredibly well, but the character was not very compelling. In fact, I would say that McDormand’s superb acting and Zhao’s beautiful art direction essentially carried the entire film.

If Fern were played by a mediocre actor and there were no beautiful desert vistas, the film would have flopped. Make it a film starring an amateur actor taking place in some boring forest or urban setting and it would not be anything remotely interesting.

Back to the plot (or lack thereof), it was shallow and unamusing. There was no Hero’s Journey or profound character development because the protagonist stayed mostly the same – and do you know what else there wasn’t?

There was no conflict. No stakes. No excitement. Fern can always go back to her sister’s (or Dave’s) cozy home any time she wants, so she’s never truly in any danger the way the homeless nomads on the road have legitimately nothing and are at risk of harm.

I’ll state that the premise of this woman who doesn’t feel at home with her family, doesn’t want to live with a nice group of people because she doesn’t want to join someone else’s life, and doesn’t want to settle down anywhere isn’t a bad premise – it’s the execution that was poor.

We only know vague details about Fern’s life, and why she is the way that she is, so it takes a lot of guesswork and mental gymnastics on the viewer’s part to infer what made her feel this out of place in the world, and that burden should not be placed on the audience.

And while I get that Zhao didn’t want Fern to settle down, because it wasn’t that kind of movie, I, personally, as an audience member would have preferred it if she stayed with Dave and his family. And there’s a really simple way to make that work – have her show up at the house and find some quality in the home and the people that makes her truly feel that she belongs.

Other critics have pointed out that the film suffers from being a documentary and a work of fiction at the same time, and I agree. Nearly every character besides Fern and Dave (Strathairn) were actual nomads.

That’s right, if you weren’t aware, those people were not actors. They were legitimate nomads who were basically recruited to make the film more realistic (Bob Wells really was this nomadic legend). Some might call that creative, but I would honestly describe it as lazy, especially since several characters messed up a few times by making the dialogue seem formulaic, or by accidentally looking at the camera.

Moving on, the cast, themselves, were not very compelling.

All the colorful characters that Fern meets along her journey were interesting, but beyond that, they were flat. I had no genuine attachment to any of them, nor did I care about their lives.

Swankie having cancer was sad (and I really hope that it was fictitious), but I wasn’t particularly upset because her character wasn’t really established. Likewise, I didn’t feel bad for Fern’s family issues because they were so vague and barely portrayed beyond “I’m aimless and sad because my husband died/town fell apart, and I also have issues with my sister.”

And Fern, herself, was not very likeable as a protagonist. Nearly every decision that she made was poor, and I was frustrated by her mistakes more than I was sympathetic of her problems.

Regarding the conclusion of her journey, you can tell me that it’s subjective, and that not every film needs a happy ending, but wouldn’t you rather see the protagonist recover/improve as a person as opposed to staying the same indefinitely? Even if they die at the end, they can still learn a lesson, redeem themselves, or find peace.

Lastly, I’ll tell you why this film has been receiving rave reviews and wide applause, and it’s got nothing to do with the actual story.

As I’m sure you know, this past year was a tough time where we were essentially imprisoned and forced into stagnation. The spread of COVID and the government lockdowns nearly ruined the economy, and it prevented most people from living their lives the way they wanted.

And how does Nomadland speak to us? It’s relatable – both in a positive and a negative way.

On the positive side, it appeals to our recent feelings of isolation and captivity, capitalizing on our desire to be free and get out of lockdown.

On the negative side, it elicits our fears of having our livelihood and homes taken away and being left with nothing.

The film appears more profound than it is because these aspects subconsciously resonate with us – even more so because the youth can relate especially to the wanderlust of travel while the elderly can relate to the fear of losing security.

In conclusion, while I do admire Chloe Zhao as a filmmaker, I frankly feel that Nomadland is highly overrated, and that she can make better films going forward.

Feel free to argue with me in the comments.

2 thoughts on “Nomadland Has No Plot”