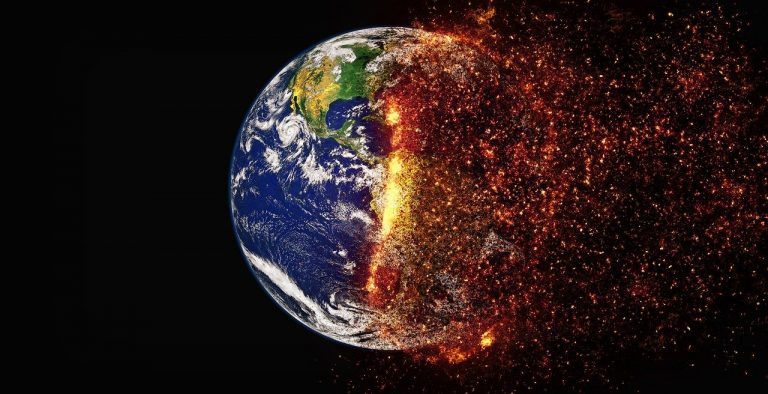 Twenty-four hours after Tuesday’s election, the U.S. officially will exit the Paris Agreement, an effort by nearly 200 countries to reduce the threat of man-made climate change. This comes as Arizona voters are expressing a growing interest in climate change and environmental policy.

A new survey of voters indicates Arizonans are becoming more concerned about climate change, which could influence their choices between two presidential candidates with starkly different strategies for tackling environmental issues.

The Morrison Institute for Public Policy at Arizona State University and the Nina Mason Pulliam Charitable Trust surveyed 800 Arizona voters in 2017 and followed up in January 2020 to gauge Arizonans’ evolving beliefs about environmental protection.

“Arizona voters are as interested or more interested in and concerned about the environment in 2020 as they were in 2017,” the survey said. “This includes attitudes
toward and opinions about wildlife, land use, rivers and streams, global warming, preservation of water, air and water quality, and government spending on and attention to the environment.”

“The climate crisis is here and it is affecting all of us right now,” said Daniela Campos, Climate Power 2020’s spokesperson in Arizona. “This summer, Phoenix hit another historical record of extreme heat, wildfires are still burning in the West, and the Atlantic is dealing with a supercharged hurricane season.

“Our country needs bold, transformative, science-based climate action. This is why climate is a critical issue for a majority of voters in Arizona in 2020.”

Historically, the topic of climate change hasn’t weighed heavily on the minds of Arizona voters until now, the new survey suggests. Although more white and Hispanic voters have prioritized environmental issues higher in the last few years, some climate activists say marginalized communities that experience the disproportionate effects of climate change have conducted much of the activism for decades.

“Not since the Apollo project, I don’t think we’ve ever seen science front and center in a national campaign before,” said Shaughnessy Naughton, president of 314 Action, a grassroots network that advocates for the election of scientists to public office. “It is because of the pandemic that we are going through, but it has exposed a lot of things that need to be fixed in our society and, you know, from racial injustice to health inequities.”

The Morrison-Pulliman survey broke down opinions on the environment by age, political affiliation and race, but only included white and Hispanic to reflect the majority populations in Arizona.

“All things considered, the way that Native American and black people in America vote isn’t necessarily changing this year,” Aiden said. “When we take care of water issues that Native communities are facing, we’re taking care of the world’s water issues. We’re figuring out innovative ways to make water accessible to everyone, every single person on this planet. Environmental justice is racial justice.”

For others, including first-time voter Taylor Ens, 24, of California, environmental issues are a relatively new interest. His concern for the climate was low in past years, he said, but now it’s a factor in his choice for president.

“Climate change is really important and really scary to me because it’s something that impacts the rest of my life, and the people that are making decisions on it really don’t seem to care that much,” Ens said.

Sarah Oven, 19, of Phoenix, another first-time voter, is frustrated with politicians who don’t deliver on promises.

“I want to see California actually getting aid for fires. I want to see Maricopa County actually make good on the heat island policies,” Oven said. “Climate change is up on my list because we are running out of time.”

If challenger Mark Kelly defeats Republican Sen. Martha McSally, Democrats will be one seat closer to flipping the Senate and declaring climate change a national priority.

In their only debate on Oct. 6, McSally, who was appointed to fill the late John McCain’s term, and Kelly highlighted disparities between them on climate change.

“The climate is changing and there is a human element to it … I’ve been leading on efforts to ensure we have an all-of-the-above energy strategy,” she said. “We’re finally in a place where we’re energy independent. Let’s use innovation, not what the left is offering.”

McSally also referred to the Green New Deal, a congressional resolution to shift away from fossil fuels and toward clean energy resources and jobs, as the “green bad deal.”

U.S. and the Paris Agreement

This month, the U.S. will officially withdraw from the Paris Climate Agreement. In the final presidential debate on Oct. 22, Democratic challenger Joe Biden and President Donald Trump defended their vastly different opinions on climate change.

Trump defended his decision to leave the Paris Agreement, saying it was unfair and would cost the U.S. “trillions of dollars.”

“I will not sacrifice tens of millions of jobs, thousands and thousands of companies because of the Paris accord,” he said.

Trump in the past has dubbed man-made climate change a hoax invented by the Chinese but has since shifted to declaring “science doesn’t know” what may lie ahead for the planet.

“We have so many different (environmental) programs,” Trump said at the debate. “I do love the environment, but what I want is crystal clear water, the cleanest air. We have the best, lowest number in carbon emissions.”

The U.S. did see a drop in emissions after the COVID-19 pandemic started in March, but emissions are back up. In fact, the U.S. ranks second for global carbon emissions behind China, according to the Union of Concerned Scientists.

“Arizonans recognize climate change as a national priority and are looking for candidates that have a bold plan on climate. One that also invests in clean energy jobs and infrastructure.” Campos said. “These voters know that there is literally no time to waste on climate.”

Biden promised he will have the U.S. “rejoin the Paris accord and make China abide by what they agreed to” in regard to keeping emissions low.

He said he plans to achieve net-zero emissions by 2050, work with every country on sustainable practices and “stand up to the abuse of power by polluters who disproportionately harm communities of color and low-income communities,” according to his climate plan.

“It really has brought into stark relief for a lot of Americans the danger of ignoring science and expertise, which we’ve seen over and over again,” said Naughton of 314 Action. “Ultimately, Americans look to scientists, they look at them as honest brokers, people who will base their conclusions on the facts and evidence. That really is what people are looking for this year.”