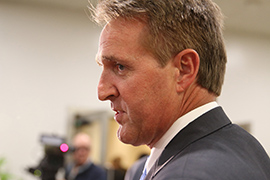 The announcement came as delegates to the Republican National Convention were formally, and unanimously, renominating Trump at the convention that kicked off in Charlotte, North Carolina, Monday.

Flake, long a critic of Trump’s, said he voted for a third-party candidate in 2016, but that he felt compelled to endorse a Democrat now because he believes Biden will approach the presidency “with the reverence and dignity it deserves.”

“Today, given what we have experienced over the past four years, it’s not enough just to register our disapproval of the president. We need to elect someone else in his place,” Flake said.

It was the latest in a “Republicans for Biden” organized by the Biden campaign, which called the GOP endorsements “a strong rebuke to the current administration.”

A spokesman for the Trump campaign brushed off the endorsements, saying in an emailed statement that “no one should be surprised when Swamp creatures gather to protect one of their own.”

“President Trump has unprecedented support – over 95 percent – among real Republican voters and is also making strong inroads in Biden’s core Democrat constituencies, like Black Americans, Latinos, and union members,” said Tim Murtaugh, the campaign’s communications director, in his email. “President Trump’s record of success for all Americans will carry him to victory in November.”

The endorsements come on the heels of appearances by several high-profile Republicans at last week’s Democratic National Convention, including former Ohio Gov. John Kasich, former Secretary of State Colin Powell and former New York Rep. Susan Molinari – who was on Monday’s announcement with Flake and Kolbe.

Nathan Gonzales, editor and publisher of Inside Elections, said he believes the endorsement was timed to coincide with the Republican National Convention that started Monday in Charlotte, North Carolina.

“I don’t believe in accidents in politics,” he said.

But Gonzales wonders how much of an impact the endorsements will have on potential swing voters.

“I don’t think there are a lot of previously undecided people just waiting for Jeff Flake to tell them who to vote for,” he said.

But Kolbe – who signed on with a Friday with a group of former Republican national security officials endorsing Biden – said Monday that, “There isn’t really a philosophical or ideological reason to support the president any longer.”

“I believe that President Trump has simply shown that he is not capable of doing the job, that he has divided this country and made it more polarized,” Kolbe said.

Kolbe, who represented the Tucson area from 1985 to 2007, said he made the endorsement in hopes of “bringing decency and good people into government,” and because he believes policies like free trade and fiscal discipline have been abandoned by the Trump administration.

Flake said he was guided by his conservative values, adding that Trump’s behavior “is most assuredly not conservative.”

“There is less of a conservative case to be made for re-electing the president than there is just a blatant appeal for rank tribalism and further division,” he said.

Flake agreed with Kolbe that Trump has not risen to the job.

“It is apparent by now that the president’s behavior has not and will not change, whatever hopes we Republicans might have entertained about the office changing the man,” he said. But contrast, he said the “steadiness of (Biden’s) leadership and the health and survival of our democracy far supersede any policy issues on which we might disagree.”

Arizona is considered a battleground state in this year’s election, with Biden holding a 48.8% to 44.1% lead over Trump, according to FiveThirtyEight’s roundup of polls.

Kolbe said he has “no idea” if his endorsement of Biden with the former lawmakers and the former national security officials will sway voters in his home state, but it was something he had to do.

“I have no expectations as to whether my endorsement of Vice President Biden will have any effect on others,” Kolbe said, “But I felt compelled to do it for my own personal reasons.”