The End of an Era? Downwinders and the Radiation Exposure Compensation Act 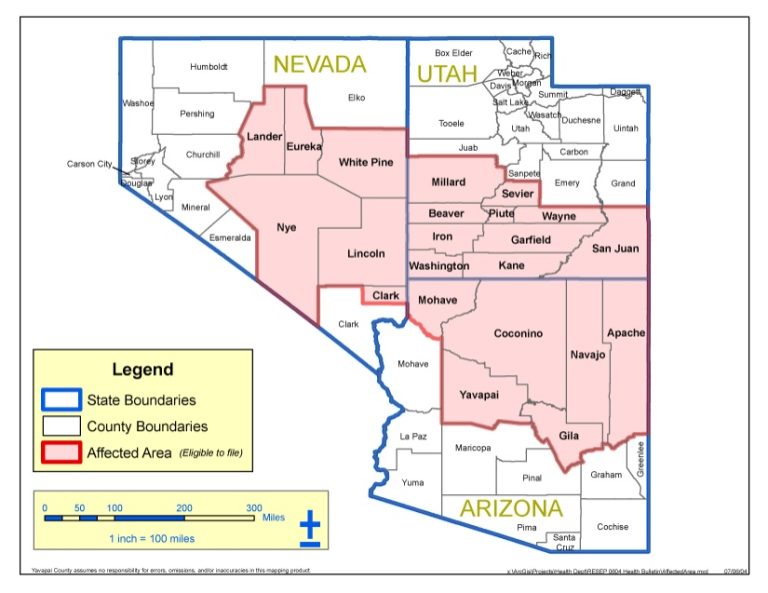 On July 9, 2022, the federal Radiation Exposure Compensation Act (RECA) will be coming to an end. This act, passed by Congress in 1990, provided for compensation to “Downwinders,” residents of northern Arizona, southern Utah, and southern Nevada who were exposed to radiation carried by wind from nuclear testing at the Nevada Testing Site between 1951 and 1958 and during July, 1962.

In Arizona, the Downwind-eligible counties are Apache, Coconino, Gila, Mohave (above the Grand Canyon), Navajo, and Yavapai. As a result of the ending of RECA, all Downwinder claims must be submitted to the U.S. Department of Justice by early May to ensure that claims have enough time to be processed by July 9th.

According to Shannon Williams, Program Manager of the Radiation Exposure Screening & Education Program, individuals need to provide documentation to show physical presence in the Downwind counties for two years during the Downwind periods to file a RECA claim. Individuals also need to establish their diagnosis of a compensable cancer, including leukemia, multiple myeloma, lymphoma, and cancers of the thyroid, lungs, esophagus, and breast, among others. Applicants do not need to provide causation on their cancer diagnosis. They only need to gather medical records that show proof of the eligible cancer.

During the Cold War, the U.S. government built a large nuclear arsenal against the Soviet Union. In 1951, above-ground testing began at the Nevada Test Site, where over 100 nuclear bombs were detonated through 1958. By 1958, all nuclear testing stopped by agreement between the United States, Great Britain, and the Soviet Union. However, in July 1962, the government detonated several above-ground devices, the last time nuclear weapons were tested above ground. Nuclear testing continued below ground at the Nevada Test Site. January 21, 1951 to October 31, 1958 and June 30, 1962 to July 31, 1962, when above-ground testing was conducted again, were designated as Downwind periods.

Residents in Yavapai County, including Prescott, were among the people affected by the radiated winds. The federal government assured the population there was no danger from the radioactive dust settling in the area. In the Cold War era, it was considered unpatriotic to think otherwise.

In 1990 Congress passed the Radiation Exposure Compensation Act, providing $50,000 per person in compensation payments to “Downwinders,” individuals who later suffered specific radiation-related cancers and other diseases. The act was revised and expanded in 1999 and 2000. At this point it is unclear whether Congress will renew RECA.

For years, the Sharlot Hall Museum Research Center (Library & Archives) provided access to documents to persons seeking to prove that they lived in Yavapai County during the specified Downwind periods. These materials included city and telephone directories for most Yavapai County cities, towns, and even smaller communities between 1951 and 1958, and 1962 and area yearbooks. Cover sheets were given to Downwinders and their descendants listing the copies of documents made showing proof of residency in Yavapai County.