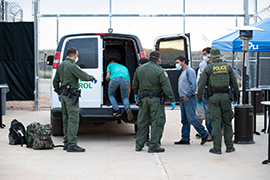 Border officials apprehended the most migrants at the southern border in at least 22 years last month, presenting a new challenge for the Biden administration’s plan to end enforcement of Title 42 just weeks from now.

The 221,303 migrants stopped in March brought the total for the first half of fiscal 2022 to more than 1 million, according to the most recent data from Customs and Border Protection, putting the U.S. on pace to break last year’s record of 1.66 million apprehensions.

It comes as Arizona lawmakers continue to push back against the White House plan to end Title 42, the pandemic health rule that let officials turn asylum seekers away at the border, amid fears that the administration will not be able to handle the subsequent surge in migrants.

“The Biden administration was wrong to set an end date for Title 42 without a comprehensive plan in place,” Sen. Mark Kelly, D-Ariz., said earlier this month, as he introduced a bill to delay that move. “We need a secure, orderly, and humane response at our southern border and our bipartisan legislation holds the Biden administration accountable to that.”

But one advocate said the CBP numbers are misleading, since Title 42 often leads to repeat encounters with migrants who try to cross the border again after being turned away. Aaron Reichlin-Melnick, senior policy counsel at the American Immigration Council, said there is no longer a legitimate health-policy reason to keep Title 42, which endangers the health and safety of asylum-seekers who are stopped.

“The use of Title 42 is an attempt to tread water in the middle of a hurricane, rather than going to shelter,” Reichlin-Melnick said Wednesday. “We have seen how Title 42 has made the border more chaotic. It has massively increased the number of people who are crossing the border over and over and over again.”

Title 42 was invoked by the Trump administration in March 2020 as a response to the then-new COVID-19 pandemic, at the direction of the Centers for Disease Control and Prevention. It allowed officials at land borders to turn away any asylum seeker in an effort to reduce the spread of the disease.

Immigration advocates criticized the regulation, which they said did little to protect public health while exposing migrants to violence and unsanitary conditions in makeshift camps on the other side of the border. They pushed President Joe Biden to lift the policy when he took office in January 2021, but he did not do so and the number of migrants expelled under Title 42 has grown since then.

“This is a bipartisan failure over the course of many years to fix our humanitarian protection system, but instead politicians have simply tried to double down on turning people away,” Reichlin-Melnick said.

Of the 1.8 million migrants who have been turned away under Title 42 at the southern border, more than 1.35 million were under the Biden administration. That included 109,549 in March, according to CBP.

The administration defended the use of Title 42 as a health measure, despite the waning pandemic. But the CDC announced this month that the regulation was no longer needed, and the Homeland Security Department set May 23 as the date to stop enforcing the rule. It will continue to enforce Title 8, which allows DHS to start removal proceedings against migrants who do not have a legal basis to stay in the U.S.

As it made the announcement on Title 42, DHS unveiled a plan to handle the expected surge in new asylum cases that calls for new detention facilities, shifting agents as needed to handle migrants, streamlining the asylum-processing system and working with other countries to reduce migrant numbers.

But in filings in an unrelated court case last week, CBP said the number of migrants apprehended in March far exceeded the agency’s capacity to hold them, which is maxed out at 31,715 migrants at the current time.

Republicans blasted the administration’s plan, which they said would overwhelm border agencies, and Arizona Attorney General Mark Brnovich joined two states that sued the administration to keep Title 42 in place. Critics said the change will only accelerate the increases in migration that have come under Biden.

“These nearly unprecedented levels of illegal immigration are not the result of circumstances beyond the control of President Biden and his administration,” said Dan Stein, president of the Federation for American Immigration Reform, in a statement released Tuesday. He accused the administration of adopting policies “to open our borders and encourage mass migration.”

Even some Democrats have raised concerns. Sen. Kyrsten Sinema, D-Ariz., is a co-sponsor of the bill with Kelly to delay lifting Title 42, and Arizona Democratic Reps. Tom O’Halleran of Sedona and Greg Stanton of Phoenix are co-sponsors of a companion bill in the House.

Their bills would extend Title 42 for 60 days, to give agencies more time to develop plans to process migrants who otherwise would have been turned away.

But Reichlin-Melnick said that while apprehensions are higher than they have been in 22 years, the number of successful border crossings is actually lower than it was in 2000 when CBP said it caught approximately 35% of migrants. Today, that number is up to 83%.

“In some ways, Title 42 was a bit of a distraction,” he said. “For the last eight years, we have been trying to deter our way out of fixing our humanitarian protection system. President Obama put in place family detention, President Trump put in place family separation, remain in Mexico and then Title 42 and President Biden has kept Title 42 in place.”