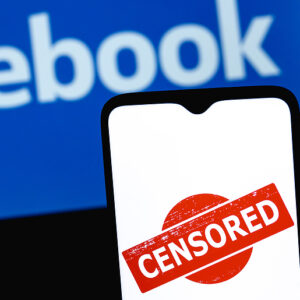 The online world has become a free speech battleground. Controversially, tech platforms have sided with illiberal regimes to censor posts while flagging “misinformation” in free countries. We all share a legitimate interest in avoiding outright falsehoods, but much censorship today—whether at the behest of dictators, or in the name of eradicating “misinformation,” ultimately is about restricting discourse into a narrow corridor of what is politically acceptable. That makes it harder to identify smart policies.

That is especially important for important issues like climate change. Global warming is real and man-made. However, social media giants—Facebook in particular—are going far beyond censoring people for denying its existence.

Facebook monitors what people say about climate change in 100 countries and uses third-party fact-checkers to flag misinformation for flagging or removal.

Here’s something Facebook’s censors deemed unacceptable: I wrote a comment using the latest peer-reviewed research from the medical journal Lancet on deaths caused by the heat and cold. The paper is the first to show that globally, every year, half a million people die because temperatures are too hot, while 4.5 million people die because it is too cold. In other words, 9-times more people die from the cold than the heat.

To avoid social media censorship of this article, I bizarrely have to cite one of the study’s lead authors instead of putting it in my own words. As that author stated, during 2000-2019 “Earth’s temperature increased by 0.26 of a degree Centigrade per decade. That reduced cold-related deaths by 0.51 percent and increased heat-related mortality by 0.21 percent, which led to a reduction in net mortality due to hot and cold temperatures.“

It’s worth considering why this is deemed “misinformation.” Clearly, it cannot be climate change denial to highlight the effects of increasing temperatures. It rather seems that the facts are muzzled because they don’t fit into approved talking points endorsed by activists, in which climate change is framed as an overwhelming, always worsening crisis everywhere, with no exceptions.

By labeling this evidence ‘misinformation’, Facebook suppresses crucial information that could help us identify the best policies to reduce future heat and cold deaths while reining in global warming effectively–which surely should be the goal.

Another example of censorship occurred when I wrote on electric vehicles. A recent Nature article reaffirms that electric cars emit less CO₂ than conventional cars. Unfortunately, large batteries also make electric cars much heavier, and heavier cars are more likely to kill the occupants of other vehicles in traffic accidents. The Nature article weighed the benefit from less CO₂ against more accident deaths. For countries with very green energy, like Norway and Canada, they found that the climate benefits outweigh accident costs, but not in less-green countries like Germany, the U.S., Japan, China, and India.

This is an interesting study. I was flagged by Facebook when I noted the authors had curiously measured CO₂ benefits at $150 per ton —higher than almost any country prices any (let alone all) emissions. For comparison, the current average global price is $2 per ton. At any realistic price — or even at the still sky-high price of $100 — the study would show traffic death costs outweigh climate benefits everywhere.

How this point is “misinformation” is extremely difficult to fathom. The inevitable conclusion is that it did not fit an acceptable narrative to reveal that even if the entire world had 100% clean energy, electric vehicle climate benefits would be outweighed by additional traffic deaths.

Disturbingly, Facebook’s vice president has admitted fact-checkers are not necessarily objective, and the company even acknowledged recently in a lawsuit that fact-check tags are “opinion,” not factual assertions. That certainly fits my own experience.

Yet some activists want even more censorship. Researchers have received praise for inventing an Artificial Intelligence (AI) tool to enable social media platforms to delete climate change “misinformation” in real-time. Absurdly, the AI tool has such a narrow view of acceptability that many mainstream scientific findings would be deleted.

Tellingly, all this censorship does very little against the enormous amount of claims in the opposite direction: activists can claim climate change effects are far worse than they really are, with little or no censorship. In other words: inconvenient facts get blocked, but convenient mistruths and exaggerations thrive.

This is disturbing above all because it will make it harder to identify good policies. The Bank of America has found current global policies to achieve net-zero emissions will cost the world $5 trillion every year for the next three decades — more than all nations and households spend on education every year.

Consistently silencing inconvenient truths leaves us all less well-informed and risks us walking blindly into spending a fortune without allowing for sorely-needed perspective.

Bjorn Lomborg is president of the Copenhagen Consensus and a visiting fellow at the Hoover Institution, Stanford University. His new book is "False Alarm — How Climate Change Panic Costs Us Trillions, Hurts the Poor, and Fails to Fix the Planet." He wrote this for InsideSources.com
All Posts »