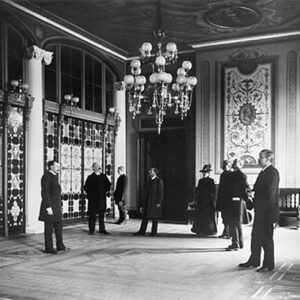 Chester Arthur never ran for president, but he got the job anyway. And the first time he walked into the White House as its new resident, he didn’t like what he saw.

But I’m getting ahead of myself. To fully understand what Arthur did to the place, you must first understand why.

To say the White House was rundown by the early 1880s is an understatement. It looked like a shabby hotel in a county seat town.

For decades, president after president did the minimum to keep the place from becoming threadbare. It wasn’t that they were cheap; there just wasn’t money for the finer things. Congress gave the president one lump sum yearly. Everything–his salary, maintenance and upkeep for the executive mansion, food and liquor for official entertaining, salaries for the staff–everything came from that pot.

They kept the exterior walls freshly painted a glistening white. But the minute you set foot inside your opinion plummeted from “splendor” to “squalor.”

First ladies tried to make the fading drapes last a little longer and to squeeze another year out of the fraying carpet. The furniture looked like hand-me-downs from poor relatives.

All that changed when an assassin sent James Garfield to the hereafter and Chester Alan Arthur to 1600 Pennsylvania Avenue.

A New York City attorney who earned big bucks, he savored the good life. Arthur spent lavishly on fine clothes, his home, and entertaining. He was a GQ dude who had to have the latest style of everything—he reportedly owned 80 pairs of pants alone, And he certainly was a trendsetter with his enormous side whiskers, the biggest facial hair sported by any president.

So, how could this Gilded Age dandy live in an 80+-year-old mansion whose best days were six decades behind it?

He couldn’t. Arthur refused to move in until big changes were made.

Elegant Arthur (as his opponent snidely called him) waited until the Widow Garfield was gone and then launched into his extreme White House makeover. And he knew just who to turn to, to give the place class.

Louis Comfort Tiffany was the Victorian Era’s big name in interior décor. He filled Robber Barons’ opulent mansions with glittering grace: Stained glass windows, glass mosaics, blown glass, ceramics, jewelry, enamels and metalwork. Remember the famous Tiffany Lamps? He made them. He turned Mark Twain’s Hartford, Connecticut home into a showplace. Now Arthur told him to do the same to the White House.

But the pièce de résistance was the main entrance, where a 50-foot opalescent Tiffany glass screen, supported by imitation marble columns, separated the north vestibule from the east-west corridor.

And what did Arthur do with the old White House furnishings? He had 24 wagon loads hauled off and sold at auction, with some pieces dating back to when John Adams moved in back in 1800.

Elegant Arthur was deliriously happy with the results. At long last, the Executive Mansion was decorated in the current fashion.

But became a problem. What’s popular today is passé tomorrow. As the 19th century drew to a close, the Tiffany Look, including the signature stained glass screen in the main hallway, seemed dated.

Yet another assassin set in motion the next White House makeover. A bullet ended William McKinley’s presidency and began Theodore Roosevelt’s. Teddy had a large, young family and needed all the extra space he could get. So in 1902, he had the East and West Wings added, turning office space on the second floor into additional bedrooms for his boisterous brood. With the construction crew already at work, he had them remove all of Tiffany’s touches.

The screen came down, the gaudiness was gone, and Teddy restored the mansion’s original neoclassical style, the look we know today.

There have been several White House “extreme makeovers” since then. The massive renovation during the Truman presidency, a complete gutting of the structure that took more than three years “changed the Executive Mansion more than the fire of 1814,” according to the White House Historical Association.

But not even former casino mogul Donald Trump’s decor could match the “Tiffany” White House of President Arthur and the Gilded Age.