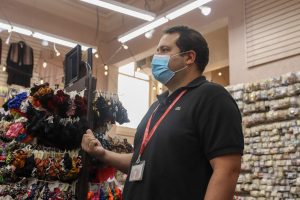 The city had a celebratory if low-key border reopening Monday, as visitors in cars and on foot crossed north for the first time since March 2020, when the U.S. banned all nonessential travel because of the COVID-19 pandemic.

Evan Kory, co-owner of La Princesa shoe store on Morley Avenue, just down the street from the newly reopened pedestrian crossing, said he was getting orders via Whatsapp and Facebook from customers who wanted him to set shoes aside.

“We’ve been waiting for this day for almost 20 months, so we’re very happy and almost can’t believe it actually came so soon,” he said.

There were no numbers available Monday on total crossings, according to U.S. Customs and Border Protection. The traffic was far from overwhelming, but residents predicted crossings will pick up in the coming days.

“It’s Monday and there’s a three-day weekend coming,” said John Mennell, a public affairs specialist for the CBP. The smaller number of vaccinated Mexicans also might account for the low number of travelers, he said.

On an average day before COVID-19, this city of 20,000 would double in size because of Mexican tourists and shoppers, and during the Christmas holidays, as many as 100,000 Mexicans visited. About 60% to 70% of sales tax revenue in Arizona border communities comes from Mexican visitors, according to the Arizona-Mexico Commission.

The lack of tourists has harmed retail, dining and hospitality businesses along Morley Avenue, the heart of commerce in Nogales. The number of people legally crossing the border in the Nogales district fell from roughly 2 million in January 2020 to 552,827 in April 2020, according to data from the University of Arizona, before rebounding to about 1.26 million in March 2021.

The two border towns – known locally as “Ambos Nogales” – previously functioned as one, just like other ports of entry that reopened Monday along the Mexican and Canadian borders. But the question remains: Will life go back to a pre-pandemic normal, or have people become accustomed to staying and spending closer to home?

“It has always been a mutual help between the two cities, no? We need as much from there as they need from here” in Arizona, said Jorge Félix, who has lived and worked in Nogales for 49 years. “So I think that this is not going to be lost while the border is open.”

Before the pandemic, Maria del Rosario Duarte Guerrero, who lives in Nogales, Sonora, used to visit her sisters on the Arizona side every weekend. This time she came on a Monday to avoid the lines she imagines will be forming by this weekend.

During the closure, her sisters went to visit her in Mexico, but they didn’t see each other as frequently. For Guerrero, the crossing went smoothly. She also plans to take a look around the stores and, after meeting up with her sister, shop for some groceries at Walmart.

“After I crossed the border I said, ‘Oh, thank God!” Duarte said with excitement.

Claudia Aguayo, owner of the Casa de Cambio a few hundred feet from the border, watched families hugging and crying from the window of her business. She estimated about 200 to 300 people crossed, most of them for the first time since 2020. During the pandemic, she had to close her store at times and look for other jobs to make ends meet. Now she plans to extend her business hours and expects a rush for Christmas.

“I come from the roots, Mexico, and it made me very sad that we couldn’t get together with our families,” she said. “This time it’s very emotional”

PrevPreviousOpinion: As Congress Addresses January 6, It Should Look West
NextArizona Projected To Add More Than 700,000 Jobs By 2030Next