The Lifeblood of a Nation 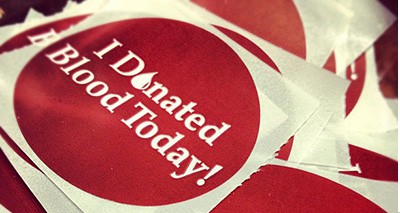 In 2016, I became convinced of the health benefits of donating blood twice a year (see here and here). Over the past five years, I have donated ten times, mostly in very diverse northern Virginia. Not once have I seen a non-white person giving blood (though people of all races work at blood banks). As someone who has been a race realist for almost 30 years, this is no surprise. Whites are the most altruistic race, and the only people who are altruistic toward other races.

According to a 2006 study, 86.7 percent of US blood donors were white, 5.8 percent were black, 3.5 percent were Hispanic and 2.3 percent were Asian. Whites donate blood far above their population levels; it is the opposite for other races. It is hard to get more recent national data on blood donations by race. Perhaps because showing who donates blood — and who doesn’t — would be inconvenient.

In both the US and Britain, the government goes to great lengths to get non-whites to donate. This is because blood transfusions — like organ transfers — are, in some cases, more successful when donors and recipients are the same race. When it comes to the special medical needs of non-whites, elites recognize the biological reality of race, but we still get propaganda like this: 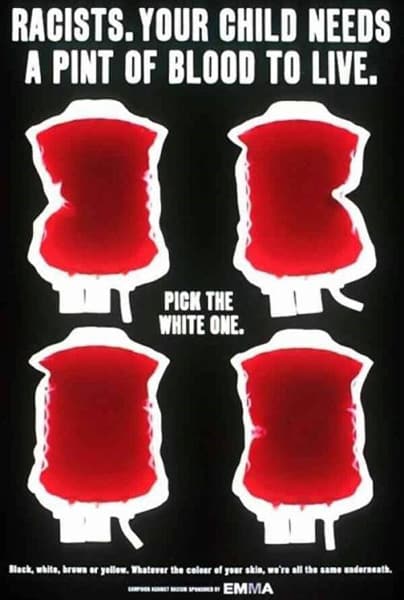 The first major blood donation program for civilians was started by the Red Cross in 1948 in Rochester, NY. Today, there are donation centers around the US supplied by 6.8 million donors — not a large number in a country of over 330 million people. Because of stringent health requirements, only about 37 percent of the US population can donate blood, and non-whites are less likely to be eligible.

Donor blood is necessary for cancer patients, trauma patients (a car crash victim can require up to 100 pints of blood), burn victims, people undergoing certain surgeries, premature babies, and people with chronic diseases such as anemia and hemophilia. Donated blood can often be used for people of a different race so long as it is the same blood type, but there is a racial component to blood transfusion that goes beyond willingness to donate.

The Red Cross lists rare blood types and the ethnic groups in which they are most common:

American Indian and Alaskan Native: RzRz, also known as Rhnull or “golden blood” (Only about one in six million people have this blood type; almost all are American Indians.)

American Renaissance touched on race and blood in December 1992 with a cover story titled “Race and Physical Differences”:

It has long been known that blood transfusions and organ transplants work best between people of the same race. Until the Second World War, stocks of blood were routinely segregated by race for this reason. Classification by race was ended when it was discovered to be “racist,” but blood banks are re-instituting segregation.

The distribution of the common blood types is different from race to race, and some rare types are unique to certain races. Only blacks have U negative blood; only whites have Vel negative or Lan negative blood. Dr. W. Laurence Marsh of the New York Blood Center justifies racial classification: ‘It makes no sense to screen 100,000 whites for U negative when no U negative white person has ever been found.’

There are diseases of the blood that are virtually race specific. Sickle cell disease affects 90,000 to 100,000 people in the US, 98 percent of whom are black. About 1,000 babies are born with the disease each year, and they may require transfusions their entire lives. Thalassemia is a blood disorder that effects mostly Middle Easterners and South Asians.

If blood shortages become common, who will get priority? As our rulers look more and more like The Squad, will white grandmothers get blood or will it go to sickle-cell patients or gangbangers who lost a gunfight? Donors can now give blood for a specific person. In the future, will whites be allowed to designate white friends or family members?

The Red Cross set up a blood donation program in a nearly 90-percent white America. It worked well for more than 70 years and has saved millions of lives. But, like everything else, diversity will change an institution started and sustained by whites. Whites will be expected to keep donating blood, which will increasingly be used by non-whites. Non-whites will not contribute their share and will then complain about racism when they suffer from shortages.

Whites are also much more likely than people of other races to donate organs and bone marrow.

Non-whites are about 60 percent of the national organ-transplant waiting list but are only 30 percent of organ donors. Even more than with blood transfusions, organ transplants work better when recipient and donor are the same race. According to the Gift of Life website:

Although organs are not matched according to race/ethnicity, and people of different races frequently match one another, all individuals waiting for an organ transplant will have a better chance of receiving one if there are large numbers of donors from their racial/ethnic background. This is because compatible blood types and tissue markers — critical qualities for donor/recipient matching — are more likely to be found among members of the same ethnicity.

Here are the 2019 figures for organ donations by race:

We see the usual racial mismatch despite the usual special pleading for non-whites to donate. Naturally, their failure to donate is blamed on white racism.

You inherit HLA [human leukocyte antigens] genes from each of your parents. These genes then code for the proteins, or markers, on your cells. Siblings are often good candidates for donors because they are more likely to have the same HLA markers as you. However, about 70 percent of patients needing a transplant do not have a fully matched donor in their family, and they must use a registry of unrelated donors for help.

Race and ethnicity impact HLA markers. Certain combinations of HLA markers may be common to an ethnic group because of its evolutionary history. This commonality makes matches more likely among people of the same ethnicity or race. For example, African Americans have more diverse HLA markers than other people, which makes finding a match more challenging. People who are of mixed-race descent may also have HLA markers that are relatively unique and therefore more difficult to match.

The majority of, but not all, matching donors come from the same racial or ethnic group as their recipients, says Erica Jensen, senior vice president at Be The Match.”

Gift of Life, a non-profit bone marrow registry, is more blunt: “Ethnicity is the key to a perfect match between donor and recipient.” This table shows the results of donor/recipient mismatch: 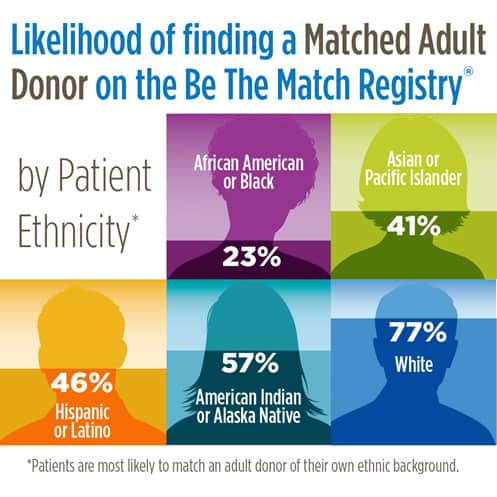 The reason for the discrepancy comes down to who donates bone marrow. The National Marrow Donor Program (NMDP) reported in 2010 that 75 percent of its donors are white and 8 percent are black. Much like blood donations, exact and more recent racial data are hard to get, but Cancer.net has an article from March 2021 that says only 4 percent of bone marrow donors are black, despite efforts to get them to donate. Their resistance, of course, is because of white “racism.”

Like everything else, the bone marrow registry bends over backwards to favor potential non-white donors. Whites are asked to pay to register as donors, but the NMDP waives the fees for non-whites:

Q: Do I have to pay to register?

A: The tissue typing process to register is currently completely funded for all people who have any ethnic minority descent. For the purposes of the NMDP, the category of Ethnic Minorities includes anyone with some or complete heritage in the Asian and Pacific Islander, Hispanic/Latino, African American/African, and Native American groups. Because of the special need for more ethnically and racially diverse donors, most of our funds are directed specifically for registering people in this category. The category of ‘non-minority’ is used for people who’s [sic] tissue types are already well represented in the registry, and includes people of Caucasian, Middle Eastern, and North African descent. Sometimes, those in the ‘non-minority’ category may be asked to help cover the costs of their own tissue typing should they wish to join the registry.

Donations show that races differ both genetically and in altruism. Non-whites show little interest in contributing — even for the benefit of people of their own race — to a system whites developed for the benefit of all. It is just one more way racial diversity hurts a formerly great nation.

PrevPreviousOpinion: Both Parties’ Ignorance of Electoral Reality Has Led To Our Present Discontents
NextOpinion: Skip Foreign Languages at Your Own PerilNext