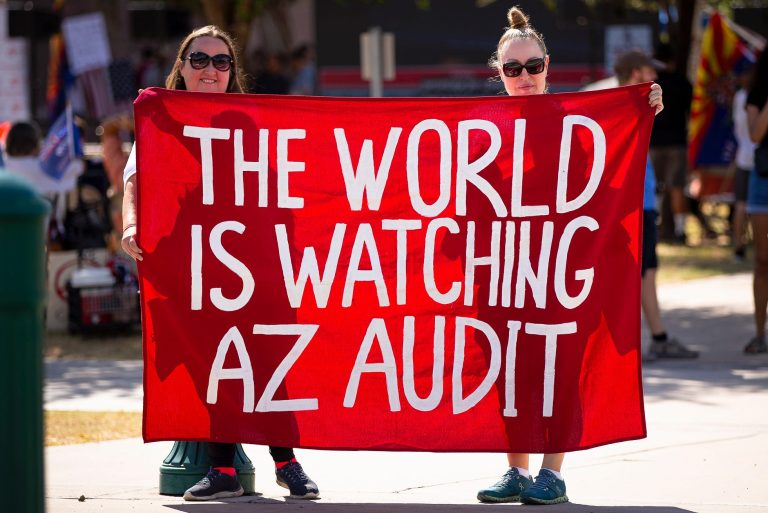 Some people are making a lot of money throwing shade at our elections. Their lies are damaging our democracy, but they are bringing in money hand-over-fist.

In Michigan, the attorney general is investigating people who have pushed false claims about the 2020 election to raise money or publicity for themselves.

In Arizona, the state’s Republican Party created a financial windfall for itself, running dozens of fundraising promotions tied to an effort to overturn the election results. Even after the much-ballyhooed Cyber Ninjas’ count showed Trump lost, the Arizona GOP sent out emails urging that more things should be “investigated.” They have also been using “Election Irregularities Exposed!” as the hook to raise money for 2022 congressional campaigns.

In Florida, “Kraken” lawyer Sidney Powell’s group will pay a fine after being accused of illegally seeking donations. A federal judge issuing sanctions against Powell said she was “troubled that Powell is profiting from the filing of this and other frivolous election-challenge lawsuits.”

Yes, there’s money to be made by creating doubt about the election results.

The Trump campaign and the RNC have raised hundreds of millions of dollars leveraging false claims and promises to overturn the election – while spending only a tiny fraction of the money on actual legal costs. Trump’s “Save America” PAC raked in more than $30 million through fundraising appeals for an “election defense fund” in November and December – and spent absolutely nothing on legal services during that time.

In Pennsylvania, one group casting doubt on the election results said its fundraising was interrupted because Mastercard and VISA determined they were “too risky to continue to do business with.” And one of the first things state Sen. Doug Mastriano did after asking three counties to turn over their ballots and voting machines, was kick off a fundraising campaign advertising that he would “fight to uncover the truth about the 2020 election for you.”

To be clear: The truth is “The November 3rd election was the most secure in American history” – and that’s according to the Trump administration’s Election Infrastructure Government Coordinating Council.

The truth is U.S. attorneys and FBI agents investigated allegations about the election but did not find “fraud on a scale that could have effected a different outcome” – and that’s according to Trump’s hand-picked Attorney General and apologist William Barr.

The truth is a record-breaking number of Americans voted in the November elections. And that’s good news for all of us who believe that our government ‘by the people’ works better when more people participate.

The truth is a majority of those voters chose to elect Joe Biden as president, not Donald Trump.

But the truth doesn’t seem to matter much to folks raising money by sowing doubt about our elections.

Sidney Powell’s lawyers said “no reasonable person would conclude” her statements about the election “were truly statements of fact” rather than political hyperbole. Yet her group’s new fundraising filings still say they’re planning to raise more than $7 million before September 30th.

The Maricopa County Board of Supervisors – almost all Republicans – called the group running Arizona’s sham election review “grifters and con-artists, who are fundraising hard-earned money from our fellow citizens.”

Michigan’s Senate Oversight Committee — again, Republican-led — recommended, “citizens use a critical eye and ear toward those who have pushed demonstrably false theories for their own personal gain.”

For a few days it looked like the partisan election review fervor was calming down. But then, former President Trump stepped in. Wisconsin Assembly Speaker Robin Vos flew to Alabama with Trump in a private plane, pledged “we will do whatever it takes to help.” Pennsylvania Senate President Pro Tempore Jake Corman spoke with Trump and announced plans to have a further review of the election, adding, “I think he’s comfortable with where we’re heading and so we’re going to continue that work.”

Voters should remember that none of this is about “restoring confidence” in our elections. It’s just about the Benjamins. These are our elections, our votes, and our voices that are being misused as fundraising fodder.

And there’s a huge cost. In the words of Michigan’s Senate committee, “Lowered confidence in our election system, and thereby lower turnout, is a threat to our democracy we should not take lightly.”

Those who are manufacturing doubts about our election results have a strong profit motive: they need to keep the doubts alive to keep the dollars flowing.

But the rest of us can stop falling for their scam, and stop subsidizing these unfounded attacks on America’s elections.

Karen Hobert Flynn is the president of Common Cause, which since 1970, has been holding power accountable through lobbying, litigation and grassroots organizing. She wrote this for InsideSources.com.
All Posts »