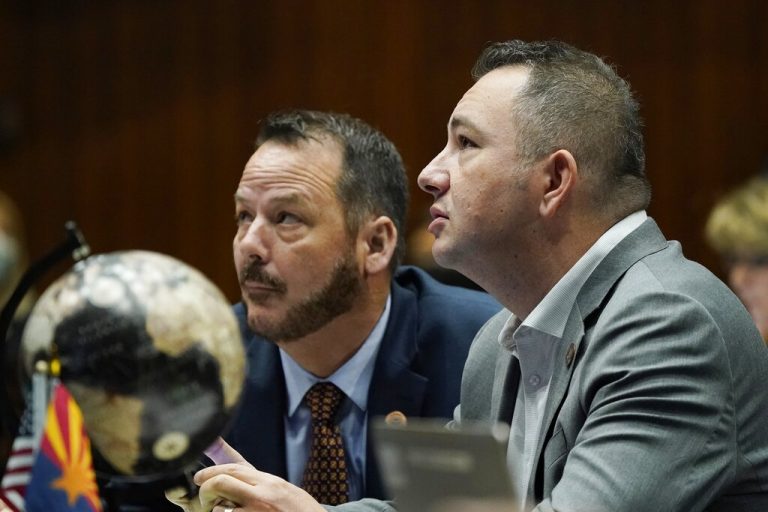 Photo: Arizona House Majority Leader Ben Toma, R-Peoria, right, watches the voting board along with Rep. Jeff Weninger, R-Chandler, during a vote on the Arizona budget Thursday, June 24, 2021, in Phoenix.

The Arizona House on Thursday approved a $1.9 billion income tax cut package that mainly benefits the wealthy as majority Republicans began pushing through a state budget plan opposed by Democrats and packed with a conservative wish list of unrelated policy changes.

The House joined the Senate in approving the tax cuts and another bill shielding high-earning taxpayers from the effects of a new 3.5% tax surcharge voters approved in November to boost education funding.

In all, they had approved seven of the 11 bills that make up the $12.8 billion budget plan by sundown. The 31-29 party-line votes came after majority Republicans, angered that House Democrats failed to show up to work earlier in the week, limited debate on the budget plan.

House Speaker Rusty Bowers announced that the majority party would change the rules and allow only 30 minutes of debate on each of the 11 budget bills. Such debate typically takes up hours on each bill.

“It is clear, was clear then, by the absence of an entire caucus … that procedural obstruction and delay have been instituted in lieu of civility,” Bowers said.

Republicans say the state is flush with cash, and the tax cut is needed to keep Arizona competitive and prevent the tax increase contained in Proposition 208, which added the new tax on high-earning Arizonans. They argued the tax cut will help businesses create jobs and that will help the middle class.

“I think what we do have here is a historic tax cut that will result in significant positive impact for everyone, everyone in the state,” said Peoria Rep. Ben Toma, the majority leader and a key architect of the tax cuts. “It’s a tax cut that helps small businesses, and it helps us be more competitive as a state relative to our neighbors.”

Democrats vehemently oppose the tax cuts, saying without them the state could finally fully fund schools and social programs that were never completely restored after the Great Recession.

“This is the time to make meaningful investments in our state’s future instead of this massive giveaway to folks who are really not struggling,” Democratic Rep. Kelli Butler of Paradise Valley said. “And there are plenty in Arizona who are really struggling.”

The $1.9 billion in tax cuts will be phased in when revenue targets are met, starting at $1.3 billion this year. When fully phased in, the plan would lower tax rates for most taxpayers to 2.5%, down from a range of 2.59% to 4.5%. Wealthy taxpayers would, in effect, be spared from the tax hike approved by voters last year to pay for schools.

Gov. Doug Ducey hailed the passage of the tax cut bill and the provision shielding individuals earning over $250,000 or couples making more than $500,000 from the new Proposition 208 tax. The estimated $827 million a year in new money will still go to schools, but it will come out of the general fund, preventing the state from funding other programs.

“Every Arizonan — no matter how much they make — wins with this legislation. They will get to keep more of the money they earn under this tax plan,” Ducey said. “It will protect small businesses from a devastating 77% tax increase, it ensures working families and all Arizona taxpayers get to spend their money how they choose, and it will help our state stay competitive so we can continue to attract good-paying jobs.”

Changes negotiated by a pair of GOP holdouts protect city revenues by boosting the percentage of income tax shared with municipalities, and boost state debt payoffs to $1.9 billion.

The new rules eliminated most of the usual debate, questions and forced roll call votes on amendments that can eat up hours of time. Holding 29 of 60 seats, Democrats’ only power is to slow the movement of bills by extensive debate.

Democrats were enraged, saying they did not show up Tuesday because Republicans had introduced a slew of last-minute budget amendments, and noted that it was absent Republicans who prevented a quorum.

Rep. Charlene Fernandez of Yuma called the limits “absolutely ridiculous” and said Republicans wasted 26 days of the session getting their own members on board with the budget deal.

The Senate packed the budget with conservative policy priorities, including a big expansion of the state’s private school voucher program, a ban on teaching so-called critical race theory in K-12 schools, and a host of items targeting the enforcement of coronavirus restrictions. They include bans on cities requiring vaccines or ordering mask mandates if the pandemic again surges and similar restrictions for schools and state colleges and universities.

Republican Rep. Bret Roberts of Maricopa said he would not have voted for the health budget bill without those items and told members that he was glad they were included.

Democratic Rep. Lorenzo Sierra of Cashion, who survived a severe case of COVID-19 that left him on a ventilator for days, was flabbergasted. “Arrogance is not an effective vaccine against COVID-19,” Sierra said.

It also embraces the unfounded theory that former President Donald Trump lost in Arizona because of voter fraud, creating a $12 million election integrity fund to pay for election security updates and other priorities.

While Republicans appear to have the votes to pass the overall budget, some of the items added by the Senate could end up being dropped by the House.

The Senate, meanwhile, re-introduced and passed 22 bills that Ducey vetoed last month, when he said he wouldn’t sign any new measures before lawmakers approved a budget. The unexpected action infuriated many lawmakers.

Senators also took the extremely unusual step Thursday of voting to override one of Ducey’s vetoes, which requires a two-thirds vote. Republican Sen. Tyler Pace said they chose a bill making technical changes to state laws that had previously passed unanimously to send Ducey the message that lawmakers won’t roll over.

The last time the Legislature overrode a governor’s veto was in 1981.

[Editor’s note: For more on this topic see “Two Cheers for Governor Ducey“]