Opinion: Fixing the Criminal Justice System Starts From the Bottom of the Ticket 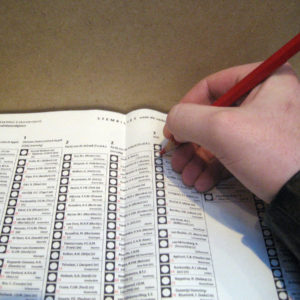 With the final days of the 2020 election quickly approaching, allies of President Donald Trump and former Vice President Joe Biden are spending billions of dollars on advertising in an effort to sway undecided voters and gin up enthusiasm among supporters.

Promises to “reform the justice system,” and messages of “law and order” have blanketed the internet and flooded the airwaves with an unprecedented intensity. Clearly, both candidates expect voters to be thinking about criminal justice as they head to the ballot box.

But for those motivated by fixing our broken justice system, the top of the ticket is not actually the best place to look for change.

While it is true that whoever claims the White House this November will have a wide range of power to set the tone for criminal justice policy across the nation, the vast majority of the real work done in our justice system is at the local level.

The elected individual most responsible for deciding who ends up in jail or what happens if police cross the line is almost always the local prosecutor. Whatever they may lack in name recognition, they more than make up for in influence over how justice is served in your community.

Historically, the quality and approach of your district attorney was almost entirely the luck of the draw. Even now, the majority of our country’s over 2,300 elected prosecutors run unopposed year after year, securing four or even six year terms in the process.

However, automatic reelection has become less common in recent years with several hotly contested prosecutor races taking place in Ann Arbor, Atlanta and Los Angeles. Increasingly, Americans are finding they have a choice in who will represent their community in the criminal justice system.

To many the job may seem simple: prosecute people who break the law. However, that short description fails to capture the full scope of the job.

Prosecutors wield an incredible amount of discretion over which charges they pursue or drop and who lands in jail or receives a second chance. For one prosecutor, aggressive enforcement may be the priority as they choose to pursue every possible offense, no matter how minor.

Another prosecutor may see chasing minimal violations as a waste of time and taxpayer money, opting instead to focus their limited resources on serious threats to public safety. The impact for the community in question can be significant.

Simply consider the example set in Winnebago County, Wisconsin, where District Attorney Christian Gossett is changing how his community deals with low-level offenses.

Rather than opening another jail to confine people charged with minor offenses, one of Gossett’s new initiatives will connect individuals with necessary community services and supervise their progress to solve the underlying issues connected with their charged offense.

Similarly, Dave Sunday, the district attorney for York County Pennsylvania, made news when he recommitted to diversity and accountability, including by publishing his office’s mission statement to the public: a move towards accountability when many are questioning the fairness of our justice system.

Beyond written commitments, a handful of prosecutors from both parties have taken the next step and made their data available to the public — a move that allows communities to judge how well their local prosecutors are performing in a variety of ways, rather than just by the number of people that  they put in jail.

Not every American will have the chance to choose the shape of justice in their community this November. Yet, all Americans owe it to themselves and their community to determine whether they are one of the lucky ones, from Austin, Texas to Iron County, Wisconsin, where the office of local prosecutor is on the line.

The presidential race will continue to capture the headlines, but it is there, at the bottom of the ballot, that justice has the best chance to take root.