Nonessential border travel ban to be lifted after nearly 20 months 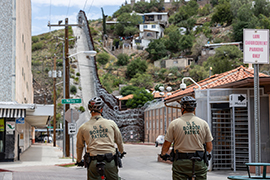 Fully vaccinated non-essential travelers will be allowed to cross the U.S. border from Mexico starting in November, ending nearly 20 months of pandemic restrictions that were choking businesses in border communities.

No specific date was given for when the restrictions will be lifted, but the long-awaited announcement was welcomed by area officials, who have been repeatedly disappointed in their hopes that nonessential travel would be allowed to resume.

“It’s a great start and we’re really elated to be able to have friends, be able to return back to visit us here in business, and throughout the state of Arizona,” Douglas Mayor Donald C. Huish said Wednesday.

He was particularly pleased that the new rule would take effect in time for people to cross the border for holiday shopping and visiting.

The new rule, announced Tuesday by the Department of Homeland Security, will allow nonessential travelers to cross at land borders from Mexico and Canada if they have proof of vaccination, reversing a ban on nonessential travel from those countries that began in March 2020.

Essential travelers, like commercial truckers, health care workers and others, have been allowed to cross the border during the pandemic. But they will also need to produce proof of vaccination beginning in January if they wish to continue crossing, under the new policy.

In a statement announcing the change, the Department of Homeland Security said the January date was designed to give essential travelers “ample time” to get the vaccine, while creating a uniform standard for vaccination “for all foreign nationals traveling to the United States – whether by air, land or ferry.”

Businesses and residents of border communities had long complained that people crossing at land ports of entry were being held to a stricter standard than people who flew to the U.S., where nonessential travel has more often been allowed. Besides stopping many family visits, the restrictions also cut off many businesses on one side of the border from their customers on the other.

Calls to local business groups were not immediately returned Wednesday, but Garrick Taylor, the spokesperson for the Arizona Chamber of Commerce, said he is aware businesses were harmed by the restrictions and many were not able to recover because of the pandemic. Businesses in the border sector “that have been able to survive are very pleased with this decision,” he said.

That was echoed by Rep. Raul Grijalva, D-Tucson, who welcomed Tuesday’s announcement.

“For border communities, including Southern Arizona, these indeterminant border closures have caused great financial hardship to borderland residents and businesses that rely on the influx of tourism and trade for their livelihoods,” Grijalva said in a prepared statement.

The ban, which was first put in effect on March 24, 2020, was extended monthly as the COVID-19 pandemic worsened. Local officials were hoping this summer for the policy to be lifted as COVID-19 cases fell, but DHS kept extending it every month as the delta variant of the coronavirus started to drive up cases and deaths again.

The current extension is set to run through Oct. 21. It was not clear Wednesday how far into November the department might extend the restriction.

Huish attributed the change to the increased availability of vaccines, the upcoming holiday season and “continuous pressure” from elected officials in Arizona and the other states on the southern border.

He said that 5,700 people currently cross the border in his town every day, and he expects that number to jump 20% once the restrictions are lifted, “due to the fact that they have not been allowed to cross for such a long period.” Huish thinks the change was delayed until November to give Customs and Border Protection time to prepare for that surge.

“I think that’s why the delay to officially allow that is to November, so that they can be able to have the proper staffing and proper protocols in place,” Huish said.

He also said that local officials hope to see as many as 15,000 daily crossers during the holiday season.

“We as a city will of course benefit economically, but will also benefit as family members being able to once again be able to see each other more frequency, especially during this wonderful holiday season,” he said.

PrevPreviousOpinion: Are the Good Times Over for Joe?
NextGovernor Ducey Announces Additional $5 Million For Small BusinessesNext