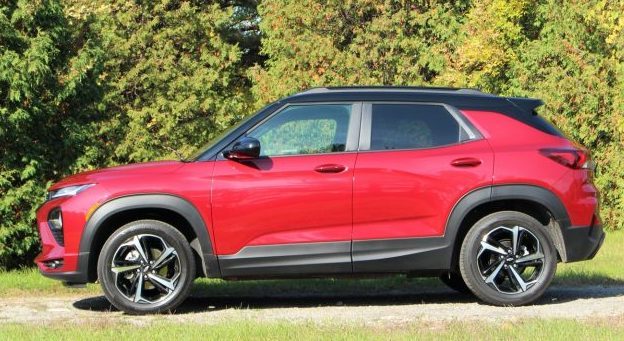 Subcompact crossover SUVs have been gaining popularity over the years due to their fun, easier to drive and roomy interior characteristics, and car manufacturers have been finding ways to improve their sales figures and customer base by offering an increasing number of features day by day. The Chevy Trailblazer ticks all boxes when it comes to being a worthy small crossover SUV. From its roomy interior, easy-to-drive handling, and attractive price tag, it seems to be a good option for those looking for an uber-cool small SUV that can wade through the concrete jungle with ease.

The Chevy Trailblazer’s design and appearance are inspired by its big brother, the mid-size Chevy Blazer and its younger sibling, the Trax. It seems to be the culmination of these two as it has the looks and stance of a Blazer and gets its nimble and easy drivability from the Trax.

The Chevy Trailblazer comes in four trim levels named LS, LT, Activ, and RS and the price tag ranges from $22,795 to $26,895. You can also opt for the various packages that are available such as the Adaptive Cruise Control package, Convenience package, Confidence II and the Driver Confidence packages. These packages add some really useful features to the Trailblazer depending on what you need.

GMC recently announced a new active safety package for the 2022 Trailblazer along with the other packages that are already available as optional extras. Although additional information about the new Active Safety Package is unknown as of now, we can be sure that the new package has some advanced safety features that focus on driver and passenger safety at a higher level as GM constantly reminds its customers that safety is always one of the top priorities that they imbibe in their cars.

The Chevy Trailblazer currently comes with the Driver Confidence package which emphasizes on driver safety with some active safety features available in the form of a blind-spot monitor, rear-cross traffic alert, and rear parking sensors. The new Active Safety Package on the other hand is aimed at providing the best possible active safety aids in the segment for driver and passenger protection.

As far as the current safety packages go, packages like the Driver Confidence and the Driver Cruise Packages already come with features that were mentioned earlier and are available for the LT, Activ, and the RS trim levels only. There’s also a Chevy Safety Assist package that comes with forward collision alerts, automatic emergency braking, front pedestrian braking, lane keep assist, and so on.

The new Active Safety Package on the other hand is rumored to have some clever and latest safety tech that includes a driver sensor that senses the driver’s health condition and will be capable of gaining control of the vehicle in case of the driver being incapacitated to avoid further injuries that may prove fatal.

Another possible feature added to the new Active Safety Feature would be an over-the-air update system that will let the driver know of the diagnostics and other information that may concern the Chevy Trailblazer’s safety. A heads-up display would also be an apt addition to the package as it will help the driver concentrate more on the road while providing them with information within their field of vision.

Apart from the addition of an Active Safety Package, the Chevy Trailblazer also gets some aesthetic updates with new paint options available and some other useful updates in the form of an optional heated steering wheel, roof rack cross rails, and a trailering package. The 2022 Chevy Trailblazer is available in four trim levels, two powertrain options and starts at $22,795. It promises to be a worthy small crossover in its segment with some clever features and uber-cool styling.

Utsav is a big-time car enthusiast, and spends a lot of time driving, reading and researching about cars.
All Posts »