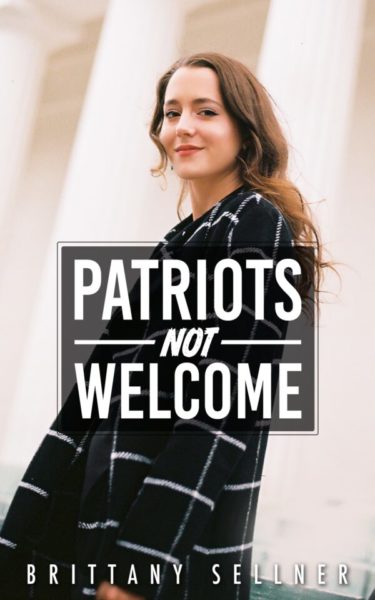 Brittany Sellner (née Pettibone) has written a new book about her life as a dissident. She wrote this memoir because the mainstream media repeatedly misrepresented her. In Patriots Not Welcome, she sets the record straight about her life, her beliefs, and her activism.

Mrs. Sellner writes that she was born on a farm in Kansas and grew up with her seven siblings in a conservative Catholic community. She wanted to be a professional writer, but in 2016, after she and her twin sister Nicole made a video supporting Donald Trump, they discovered they had no future in mainstream publishing. But they did begin to attract Trump supporters. Mrs. Sellner was impressed by the energy she found among nationalists online in places such as 4Chan, Twitter, and Reddit. Trump supporters were “full of laughter, jokes and positivity,” far more so than Clinton supporters. She began tweeting about politics and became something of a social media personality.

After President Trump’s inauguration, her sister withdrew from politics, but Mrs. Sellner continued as an independent journalist and commentator. She writes that her opposition to anti-white racism and immigration earned her many critics on the Left and in the mainstream. Her experience with journalists will sound familiar to dissidents: “[E]very single one of them acted extremely kind, fair and balanced towards me in private, while . . . the articles they published about me were chock-full of lies.” She realized that these people were interested only in shutting down dissenters and stopped giving interviews. Having grown up in a high-trust traditional community, Mrs. Sellner was amazed to see “people severing relationships, attacking, slandering and even wishing death upon each other for a difference of opinion.” Like many Western whites, she had taken for granted what she calls the “civilized world of civilized people” she grew up in.

In 2017, Mrs. Sellner went to Paris to cover the French presidential election. During her visit, an immigrant was hit by a bus during a police chase in a Muslim suburb. After he died, locals blamed the police and held a protest. Mrs. Sellner and fellow independent journalist Lauren Southern tried to cover the event, and got a lesson in diversity. A French journalist warned them to cover their hair to avoid antagonizing anyone. Protestors yelled at them to get out, and a young migrant told their interpreter they better clear out. The migrants hated being filmed and would probably attack them.

This led Mrs. Sellner to wonder about the limits of assimilation. Not everyone can — or will — assimilate to the West, since an attachment to one’s own culture is natural. She does not blame the newcomers for Europe’s unstable multiculturalism, but rather the governments that have hidden the consequences of immigration. As she puts it, “only those who support mass immigration have been given a say,” leaving what may be the majority opinion unrepresented.

Later that year, Mrs. Southern invited Mrs. Sellner to come to Europe again to report on an operation by Generation Identity (GI) called “Defend Europe,” organized by Mrs. Sellner’s future husband, Martin Sellner, who founded the Identitarian Movement in Austria (IBÖ) in 2012. GI chartered a ship and took it into the Mediterranean with three goals:

The mainstream media greeted the mission with sensationalist headlines: “A European alt-right group wants to take to the sea to stop rescuers from saving migrants” and “Alt-Right Group Plans to Hunt Migrants at Sea.” Mrs. Sellner suspects media avoided telling the truth about the mission for fear of increasing public support for it.

The mission suffered setbacks; the ship’s Sri Lankan crew was briefly detained on suspicion of smuggling drugs, weapons, and people. However, the identitarians did manage to monitor two different NGO ships: The Aquarius, working for SOS Méditerranée; and the Golfo Azurro, working for Proactiva Open Arms. Thanks to the attention they brought to the situation, the Italian government started cracking down on NGO vessels, and migrant departures from North Africa to Europe dropped by an estimated 76 percent in the first 10 days of August 2017 compared to the same period in 2016.

Mrs. Sellner was very impressed with Mr. Sellner from the first time she met him. After the Defend Europe mission, the two became romantically involved and he proposed during a boat ride on the Danube.

In March 2018, she and Mr. Sellner went to Britain, she to interview anti-Islamization activist Tommy Robinson and he to appear at Speaker’s Corner in Hyde Park, but the couple was detained by immigration authorities at Luton Airport in London. Law enforcement interrogated them about their politics and told them they would be deported in two days. They were kept in a high-security detention facility. The warden warned her that some inmates might be hostile to her and Mr. Sellner if they knew who they were.

Before her deportation, Mrs. Sellner got a document from an immigration officer explaining that she had been denied permission to enter the UK. The letter called Mr. Robinson a “far-right leader whose materials and speeches incite racial hatred,” and noted that Mr. Sellner was the co-founder of Generation Identity, which is “viewed in the UK as a right wing organization.” The letter added, “Your boyfriend have [sic] in his possession the Leaflets with scenarios regarding possible violence at his speech.” This referred to leaflets giving advice on what attendees should do if assaulted by antifa. Finally, the letter claimed that Mrs. Sellner’s presence in the UK was likely to “insight [sic] tensions.”

The same thing happened to Lauren Southern soon afterwards. When she tried to enter the UK from France, she was held and interrogated about her political and religious views before being deported back to France. During her interrogation, police asked her how she felt about running Muslims over with cars. These deportations were setbacks, but the Sellners and Mrs. Southern won widespread sympathy. Ultimately, Mrs. Sellner was able to interview Mr. Robinson, but did so in Austria rather than in Britain. Mr. Robinson also gave Mr. Sellner’s Speaker’s Corner speech in his place.

In April of that year, Mrs. Sellner went to another identitarian action, Defend Europe Alps. Activists gathered at a popular crossing point for illegal immigrants on the French-Italian border, waving flares and carrying a banner that read: “Closed Border. You will not make Europe home! NO WAY. Back to your homeland.” When the identitarians spotted inbound illegal immigrants, they notified the French police, who arrested them.

The French government took notice of the event and pledged “to send security forces to the French-Italian border to ensure that it is secured.” But the next year, the government charged several activists with “impersonating members of the security forces.” Three activists were initially sentenced to six months in prison and a €2,000 fine, and Generation Identity itself was fined €75,000. A successful appeal ended in December 2020 with the convictions thrown out. Unfortunately, the French government wasn’t finished with GI. On March 3, 2021, President Emmanuel Macron ordered the organization dissolved, claiming it incited “discrimination, hatred and violence.”

The Austrian government has also penalized identitarians. In July 2018, 17 Austrian members of Generation Identity, including Mr. Sellner, were charged with “forming a criminal organization.” Since 2016, laws designed to fight organized crime can be used against groups that promote “hate speech,” not just those suspected of violence and/or extortion. State Prosecutor Johannes Winklhofer claimed that the purpose of Generation Identity was to incite hatred of minorities. All 17 identitarians maintained their innocence and all 17 were acquitted of hate speech and of forming a criminal organization. The prosecutor appealed, but the ruling was upheld by the High Court on January 23, 2019.

After the mosque shootings in Christchurch, New Zealand in March 2019, Prosecutor Winklhofer claimed Mr. Sellner was somehow involved. The link was that the shooter, Brenton Tarrant, had made a €1,500 donation to the Austrian identitarians a year before the attack. Mr. Sellner and other identitarians were investigated again, this time for involvement in “a terrorist organization.” Mr. Sellner’s personal communications were put under surveillance and police raided his apartment twice, seizing laptops and cell phones. The group’s finances were scrutinized for tax evasion.

Even Mrs. Sellner was named as a target of the terrorism investigation. Authorities told her it was because she had interviewed Australian nationalist Blair Cottrell, who had also received a donation from Brenton Tarrant. Like Mr. Sellner, Mr. Cottrell had no further connection with Mr. Tarrant and condemned the Christchurch attack. The Austrian High Court ruled on December 12, 2019 that both the house raids and the surveillance were illegal. The court said the prosecutor’s justification for them was at times “pure speculation” and even “incomprehensible.” Again, the prosecutor appealed, but the ruling was upheld.

However, the Austrian government did not stop there. Shortly after the terrorism investigation, it banned both the names and logos of Mr. Sellner’s organizations (the Identitarian Movement in Austria and The Austrians). Mr. Sellner was also personally barred from activism in or on any federal building. Meanwhile, media and non-profits continue to mischaracterize and malign Mr. Sellner. A group called the Counter Extremism Project put his name on its list of “most dangerous extremists around the world,” most of whom are terrorists, such as Ahmed Umar Abu Ubaidah, the leader of Al-Shabaab; and Hassan Nasrallah, the Secretary-General of Hezbollah.

The terrorism investigation complicated the Sellners’ marriage plans. Their wedding was to be in Idaho, but Mr. Sellner was prohibited from coming to America. Mrs. Sellner convinced the Republican Party of Kootenai County, Idaho to pass a unanimous resolution supporting his right to enter the country, but to no avail. They were married in Austria.

Mrs. Sellner notes that in the face of so much repression, some patriots have become “disheartened, angry . . . and even radicalized.” She argues that “certain leftists wanted . . . right-wing radicalization, and perhaps even right-wing violence. Both would supply them with the ammunition they needed to crack down on the right even more.” Her husband has expressed the same view. The Sellners and other identitarians have always rejected violence. Mrs. Sellner quotes from a speech her husband made to the people of Britain:

[R]emember who you are. Remember your glorious past. You are the sons and daughters of knights, of kings, of explorers, philosophers and artists. Who is the sovereign in this country? It’s you, the people . . . who said no during Brexit. You can say no again. No to islamization, no to mass immigration and the Great Replacement. And yes to your identity, your security, yes to your heritage and the future of your children.”

All of this, as Mr. Sellner noted, “is impossible without freedom of speech.” Mrs. Sellner adds that to win, we must fight for this right and exercise it without fear. These are her concluding words:

We’ve come to realize that in a world as totalitarian as ours, the fight isn’t so much about keeping ourselves safe from vilification and repression; it’s not even about victory and defeat; it’s about living our lives, albeit imperfectly, in service of God, our families, and our countries. Perhaps, in this way, we might succeed in being remembered as having taken part in this war, even if we are ultimately unable to witness its outcome. But for now, the road that Martin and I are walking has not ended. Our fight is not over, and neither is our story. It’s simply the end of this particular story.

Mr. Jackson is a white American with an interest in race realism and a passion for writing.
All Posts »