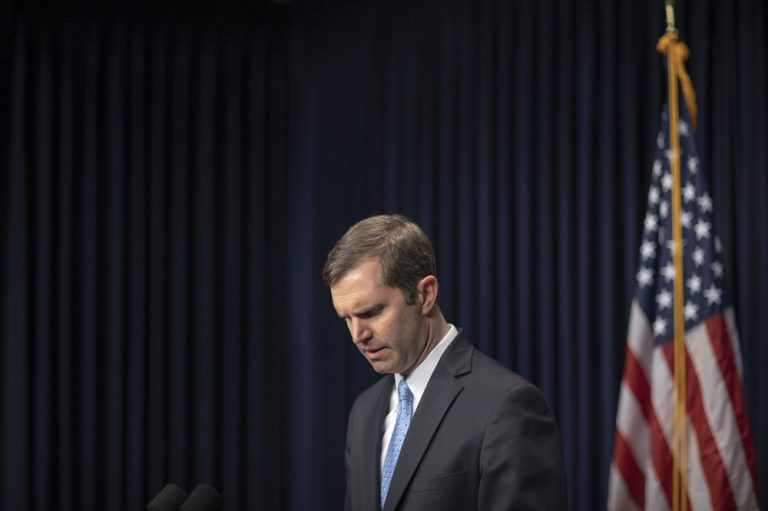 Impeachment fever has struck Kentucky, where grievances over coronavirus restrictions and the outcome of the Breonna Taylor death investigation have spurred petitions to oust both the governor and the attorney general.

It’s a card rarely played in any serious way in the Bluegrass State, though Kentucky has had its share of provocative elected officials. In the two new cases, the effort to impeach was triggered by disagreements over policy or executive decisions at the highest levels of Kentucky government.

Experts say the frenzy reflects the bitter political divide dominating public discourse nationally, and some worry that it weaponizes a tool of last resort normally reserved for egregious misbehavior to address political grievances. But some also see it as a sign that newcomers to politics are intent on shaking up the system.

“In the age of social media and Donald Trump appealing to people who think they’ve been disregarded or dispossessed, a lot of people who would not have felt comfortable engaging in the process now feel comfortable in not only engaging in it but challenging it,” said longtime political commentator Al Cross.

Only a handful of Kentuckians submitted each petition, and it remains to be seen how seriously lawmakers take them. Republicans hold supermajorities in both chambers of the legislature.

The impeachment flurry began when four petitioners accused Democratic Gov. Andy Beshear of violating the state and U.S. constitutions with his restrictions to try to prevent the spread of COVID-19. That drew attention to a process that in prior years tended to fade away quietly if it came up at all.

GOP House Speaker David Osborne took a different approach than some of his predecessors when he appointed four Republicans and three Democrats to a special committee. In the past, such petitions went to the House Judiciary Committee, where Republicans now hold a commanding 14-4 advantage. Kentucky law requires the speaker to send impeachment petitions to a committee but doesn’t require it to take any action.

The impeachment committee met Wednesday and asked the governor for information on how his virus-related ban on mass gatherings last spring was enforced against churches, a move that especially angered conservatives. Republican Rep. Jason Nemes, the panel’s chairman, said he hoped for a quick reply “so we can resolve this matter as expeditiously as possible.”

Another petition, filed against Republican Attorney General Daniel Cameron, is less likely to gain traction than the Beshear petition because of the legislature’s makeup, although Cross and other observers say neither is likely to become more than a political nuisance.

“I don’t think either will go anywhere,” said Scott Jennings, a Kentuckian and former adviser to President George W. Bush. “We settle our policy difference at the ballot box, not like this.”

Another pending impeachment petition was filed recently against GOP state Rep. Robert Goforth, a former gubernatorial candidate who was indicted for allegedly trying to strangle a woman. Goforth has pleaded not guilty, and the case is pending.

With the focus on Beshear and Cameron, University of Louisville law professor Samuel Marcosson said the petitions against the governor and the attorney general are a misuse of the process.

“Weaponizing impeachment is not a welcome result,” he said.

Impeachment should be reserved for serious misconduct in office, not policy disputes, he said. One way to resolve policy disagreements is to vote someone out of office, he said.

Anna Whites, an attorney representing the anti-Cameron petitioners, said the state shouldn’t have to wait for an election to remedy his “dishonesty and misconduct” in the Taylor investigation. Cameron was elected to a four-year term in 2019, as was Beshear.

In one crucial legal test, Kentucky’s Supreme Court ruled the governor had the authority to put restrictions on businesses and individuals to try to contain the coronavirus.

Beshear says prolonging a meritless case by accusers he regards as anti-government extremists would be “giving more oxygen” to their beliefs.

In an earlier reflection of the overheated political climate, last year armed protesters gathered outside Beshear’s home and then hanged him in effigy. Beshear vowed not to be intimidated then, and he’s taken the same stance on the impeachment petition.

“When you look at this thing, you can’t say: ‘Do you think you shouldn’t have taken certain actions so certain people wouldn’t be mad at you,’” he said. “I take actions to save lives.”

The petition calling for Cameron’s impeachment involves a handful of people, including three grand jurors who criticized his handling of the investigation into Taylor’s shooting death by police. Cameron last year recommended charging a single officer for endangering Taylor’s neighbors, but some grand jurors have since complained they weren’t given the chance to consider charging the officers who fired into Taylor’s home.

Cameron has stood by his investigation into Taylor’s death, which fueled national protests over racial injustice. His response to the impeachment effort against him says the petition is “so lacking in legal and factual support” that it should be dismissed. Cameron’s team followed the law and presented a thorough case, the response said.

Under Kentucky’s constitution, the House possesses the sole power of impeachment. An impeachment trial is held in the Senate, where the votes of two-thirds of senators present are required for conviction.

Four constitutional officers have been impeached in Kentucky history, but only one was convicted. James “Honest Dick” Tate, a 19th-century state treasurer, was ousted for stealing $250,000 from the state and fled the country.