Shut by COVID-19, concert venues do what they do best: Put on a show 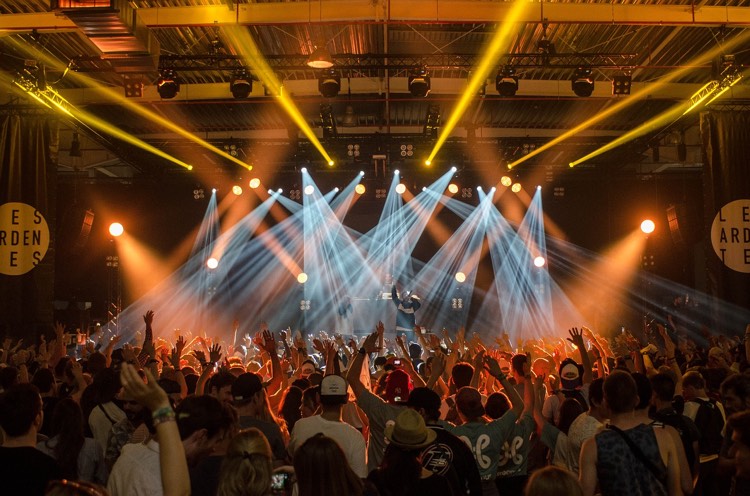 In a typical year, there would be nothing unusual about longtime Arizona concert promoter Steve Chilton scrambling all over a venue to prepare for a show.

But this is not a typical year. And the concert Chilton is pulling together this weekend is far from typical.

Chilton, a vice president of the National Independent Venue Association, has been working since June to help organize the Save Our Stages Festival, a three-day online music festival beginning Friday that will stream original performances by some of the biggest names in the music industry from some of the most storied independent venues in the country.

#SOSFEST, which will stream on NIVA’s official YouTube channel, aims to raise awareness of the threat COVID-19 poses to venues that have been shuttered since March and, unlike most other businesses, have almost zero chance of reopening before the middle of next year.

Chilton knows the pain first-hand as co-owner of the Rebel Lounge in Phoenix.

“Last year, we did over 600 shows” at the Rebel Lounge and other venues, he said. “This year will be dramatically less than that. So I think we’re at 75 shows for the year, and I don’t expect to add to that at this point.”

#SOSFEST also aims to raise money for NIVA’s Emergency Relief Fund for those venues – including music venues, comedy clubs and theaters – that have been hit the very hardest. The fund was established to tide over those establishments while the association pushes for federal relief aid.

Months may be all that most venues have: While the U.S. Chamber of Commerce reported that 90% of all small businesses had at least partially reopened by July, a NIVA survey earlier this year found 90% of its members said they would have to permanently close within a few months without federal aid.

“I don’t know how any business goes 16 months with zero revenue and high overhead. But that’s what we’re looking at,” Chilton said. The relief fund “hopefully gets us through until there is federal aid.”

Concert venues can’t adapt to the pandemic the way many other businesses do, Chilton said. “Other businesses can extend their hours, open earlier, stagger people. You just can’t do that with a mass concert,” he said.

Losing those venues could have an impact beyond the venues themselves. NIVA points to a study by the Chicago Loop Alliance, for example, which concluded that $1 spent on the arts in downtown Chicago yielded $12 of economic benefit to the area.

“The restaurant that you have a bite before you come to a show depends on us being there. The pub that you go to afterwards to talk with your friends about the performance, they need for us to be there,” said Audrey Fix Schaefer, NIVA’s communications director.

“And we are part of a big part of the tourism economy too, because people travel in for shows that otherwise would never come to a particular town,” she said.

While other industries were targeted for aid in the $2 trillion federal CARES Act, the venues were largely neglected.

Elements of the relief package, like the Paycheck Protection Program “didn’t work for us,” Fix Schaefer said. As one example, NIVA notes that businesses that took PPP loans could have the loan forgiven if less than 40% was used for non-payroll expenses.

“It does not permit us to use the money for what our expenses are, to the degree that we need them. We’ve got rent, mortgage, utilities, insurance, taxes – all of that has to be paid,” Fix Schaefer said.

The situation forced the nation’s independent venues to do something they’ve never done before – work together.

“Independent venue operators and promoters have never gotten together on a single thing before. There’s never been an association for us,” Fix Schaefer said. “But this threat was so real that we knew that we had to come together in order to be able to lobby Congress, because there’s no way to survive this without it.”

Fix Schaefer, who in her “real life” is communications director for a company that owns four Washington, D.C., area venues, called it “pretty crazy how quickly we formed.” She said the group’s founders emailed other venue operators and concert promoters across the country in early April to try to gauge interest in an association.

NIVA today has more than 2,800 members, including over 70 venue operators and concert producers in Arizona, from the Mesa Arts Center to M3F.

Their situation has also brought together some unusual political partners: Sens. John Cornyn, a Texas Republican, and Amy Klobuchar, a Minnesota Democrat, in July introduced the Save Our Stages (SOS) Act, to create a $10 billion Small Business Administration grant fund to help keep independent venues afloat through the pandemic. Under the bill, an eligible business could get up to $12 million, plus a supplemental grant worth half the original amount.

“They’re not together on any other issue that I know of,” Fix Schaefer said of the two senators. “That was a great attention-grabber for the rest of Congress.”

The House bill was rolled into the updated version of the Heroes Act, a COVID-19 relief bill that passed the House Oct. 1. That bill has been sitting in the Senate since.

“We need Congress and the White House to get it together, pass the next COVID relief bill and fold the Save Our Stages Act into it,” she said. “It’s not a partisan issue. It’s not blue or red. It’s green.”

But with prospects for a deal with the Senate and White House uncertain, “many venues are at risk of closing forever if they don’t get help today,” according to NIVA’s website. So organizers are putting the association’s Emergency Relief Fund front-and-center at #SOSFEST this weekend.

The festival, being produced in partnership with YouTube, will feature acts like the Foo Fighters performing at the Troubadour in Los Angeles, Reba McEntire at Ryman Auditorium in Nashville and the Roots at the Apollo Theater in New York. In all, 35 artists will perform in 25 venues from Friday through Sunday.

The online concert may be the best chance to see these acts for some time. “The real consensus in the industry is that touring en masse doesn’t come back until at least Q3 next year,” Chilton said.

At stack is more than just the venues’ economic impact, Chilton said, but their impact on the music itself.

“Not every artist that plays on our stages is going to become a superstar. But every single superstar started on our stages,” Chilton said.