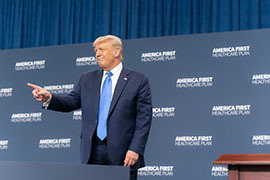 Scottsdale resident William Acorn had made occasional donations to conservative candidates in the past, but never considered himself an “avid political person.” That changed in 2020, after a flurry of emails from then-President Donald Trump’s campaign begging supporters to “step up and give us the resources” to challenge Democrats’ plans “to count ILLEGAL ballots.” Acorn became one