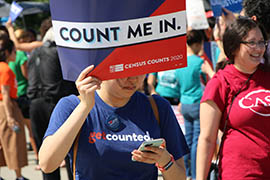 Census: Not sure it can exclude migrants, but wants to be left to try

The Trump administration said it does not know how many immigrants might be excluded from the Census under a 2019 presidential order, but it still urged the Supreme Court on Monday to overturn lower courts that blocked the proposal. That was one of the arguments raised Monday as the court considered President Donald Trump’s order