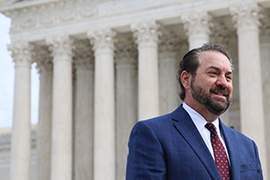 Photo: Arizona Attorney General Mark Brnovich leaves the Supreme Court in February The Supreme Court on Wednesday dismissed Arizona’s attempt to defend a Trump-era “public charge” that would have made it harder for immigrants to gain permanent residency, after the Biden administration refused to defend the policy. Wednesday’s decision means that lower court rulings that