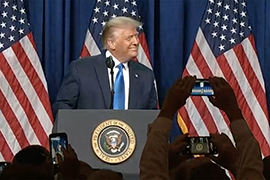 It took less than a minute, but Arizona’s delegation to the Republican National Convention cast all 57 of its votes Monday for President Donald Trump, part of a suspense-free nomination that kicked off the four-day convention. Trump got all 2,550 votes, even though only a fraction of that many delegates were actually in the hall