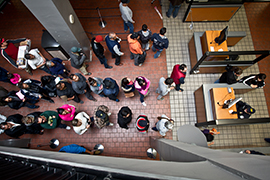 Neither side thrilled with immigration reforms in Build Back Better bill

Buried in the $1.9 trillion Build Back Better Plan is $100 billion for immigration reform, money that critics say has no business being in the bill and that migration advocates say does not go nearly far enough. The immigration provisions, which were included in the bill House approved Nov. 19 on a mostly party-line vote,