"My fitness philosophy is simple. No magic pill," Sasha says.

Part of any journey is discovery; I have personally discovered several new muscle groups that I did not know existed prior to this quest. This week I am delighted to be working with the fantastic trainers at Fusion Of Movement Studio in Prescott Valley.

Welcome to the fourth week of the quest, and the second week of training. Fusion of Movement Studio opened almost three years ago, and offers everything from dance, fitness and karate; this rocking facility is so popular it had to double its space in the first ten months of business. Ben & Sasha Naasz are a husband and wife team, running the studio as family friendly as you can get with a nursery & playroom for your little ones. They offer classes in both the mornings and evenings for flexibility; Monday morning I took part in Suspension Training, and Tuesday evening I completed the Core Fusion class. I spoke to Sasha about their business, and what brought them to Prescott Valley.

" Ben and I graduated from University of Arizona and never planned to stay in Tucson," Sasha shares. "We kind of got 'stuck' in jobs that we were passionate about, but didn't love the city. Ben was the head of the theatre department and I was the head of the dance department at Flowing Wells High School. We loved teaching and making a difference. Once our little girl was born we both decided to make a career change in hopes of being able to spend more time at home with our daughter, Lela. We worked "desk jobs" and although both of our programs had to do with outreach; we felt limited in our talents and wanted to do more. We also didn't get to spend more time with our lil girl by the time we dropped her off and picked her up from daycare. I think I cried every day at drop off. We had no family and very few good friends. Lela kept getting bit at daycare... and (after) having a very bad experience, I quit my job the next day to be with her. Tucson was not the place we wanted to raise our daughter. So Ben and I sat down one day and started to write a business plan. We knew where we wanted to move and we knew exactly what we wanted to do. I visited Prescott all the time as kid growing up in Phoenix to get out of the heat. My parents moved here in 2001 and Ben loved the small-town feel. He purposed to me while visiting my parents for Christmas in 2002. The more we talked about it and planned the more it felt like it was our calling. So we cashed in our retirement and took a leap of faith and made our move north in September of 2011. We are so thrilled that we did. This town is amazing and our family and extended Fusion family is more than we could ever hope for."

"My fitness philosophy is simple. No magic pill. No gimmicks. I believe in whole body, whole mind, health. I believe in eating clean. I believe in a support system for success," Sasha says. "I believe that there is not just one form of movement best for your body, rather a fusion of movement. Strength train, cardio, yoga... And I believe that you are meant to move every day. As they say, 'move it or lose it.'"

With over 20 fitness classes offered weekly, my schedule was spread out to cover several types of training. Monday & Tuesday would be Suspension Training & Core Fusion, respectively. 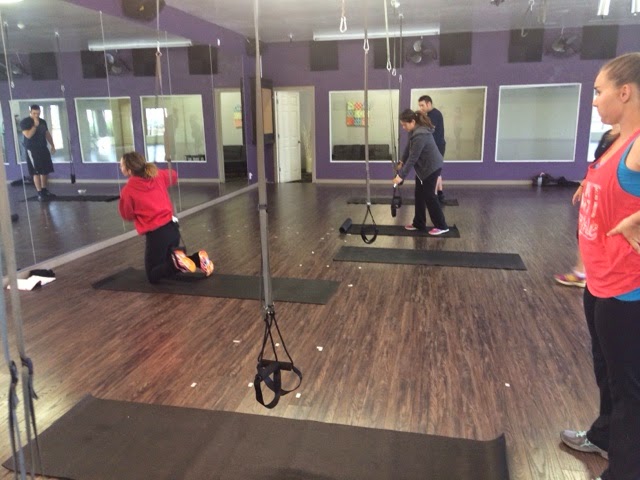 I had absolutely no clue what either was, and decided to go into them cold. Obviously suspension involved suspension, right? Trainer Alexis Pursell greeted me with a smile, and explained the suspension rigging. We would first use them while on the ground (suspending our feet or pulling up) and then we would use them standing. I figured there might be some stuff I couldn't handle, but I was optimistic (as always) after a week at boot camp. The music was turned up, and warm ups commence. I was confident! I could do these! 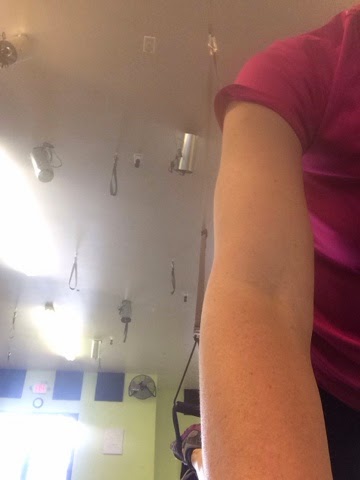 Maybe a little uncoordinated, but...

Wow. These people can MOVE.

It is at this point that I realize I am in big time trouble. Not only can I not "move to the music" but as one challenged with gangly arms and legs, there is no way for me to learn new movements in seconds. Hours, yes, seconds, no. I manage to muddle through, feeling subconscious as I look in the floor to ceiling mirror facing me. Once again, my shirt is not long enough (tall girl issue) and I see nothing but a middle-aged woman with saddlebags looking at me. Gone is the cute figure I cut in my workout clothes this morning. Instead, all I see is the flushed face of concern.

We start with a set of mountain climbers. Both legs suspended, moving as if you were (duh) climbing a mountain. We continue with more sets of three, and I know my core simply is not strong enough. That's when I hear Alexis utter the magic word: Modify.

I could modify this workout, just as I had the week before. Yes, this was a different environment - very focused, very structured, but I could modify the exercises to my capabilities.

Alexis had noticed my struggles, and had slipped in modifications without drawing attention to them. I was able to continue on and exercise, even though I could not do things requiring a strong core (or strong arms or strong legs...shall I continue?) We worked our legs, then switched to arms. I was delighted that there were a few of them I actually kept up on (let me stress - just a FEW) and I truly enjoyed the fact that suspension allowed you to use your body weight to exercise. I learned that the sets were repeated in three's, and it gave me the opportunity to "spread out" my endurance. As we finished the last set, I knew I had it in me to do the reps without modification. It wasn't like a decision to engage in the exercise, but more like dipping a toe in the water.

It felt good. I was smiling when I finished the class - even though my fitness level was far below the other class members, I had felt encouraged by their presence. There was no competition to keep up; we were in this together, although working at our own pace. Afterwards, I chatted with Alexis and a few class members; she wanted to make certain I felt ok. I shared with her that once I started the modifications, I did fine. It wasn't that I was focused on making them easier, but rather on modifying them to my strength level. She smiled. "That's exactly what it is about! People think they need to come in here and be able to handle the workout. Modifying them so that you can complete them is more important. We aren't competitive here. We want you to have a good, safe workout at your level of fitness, and to enjoy it." 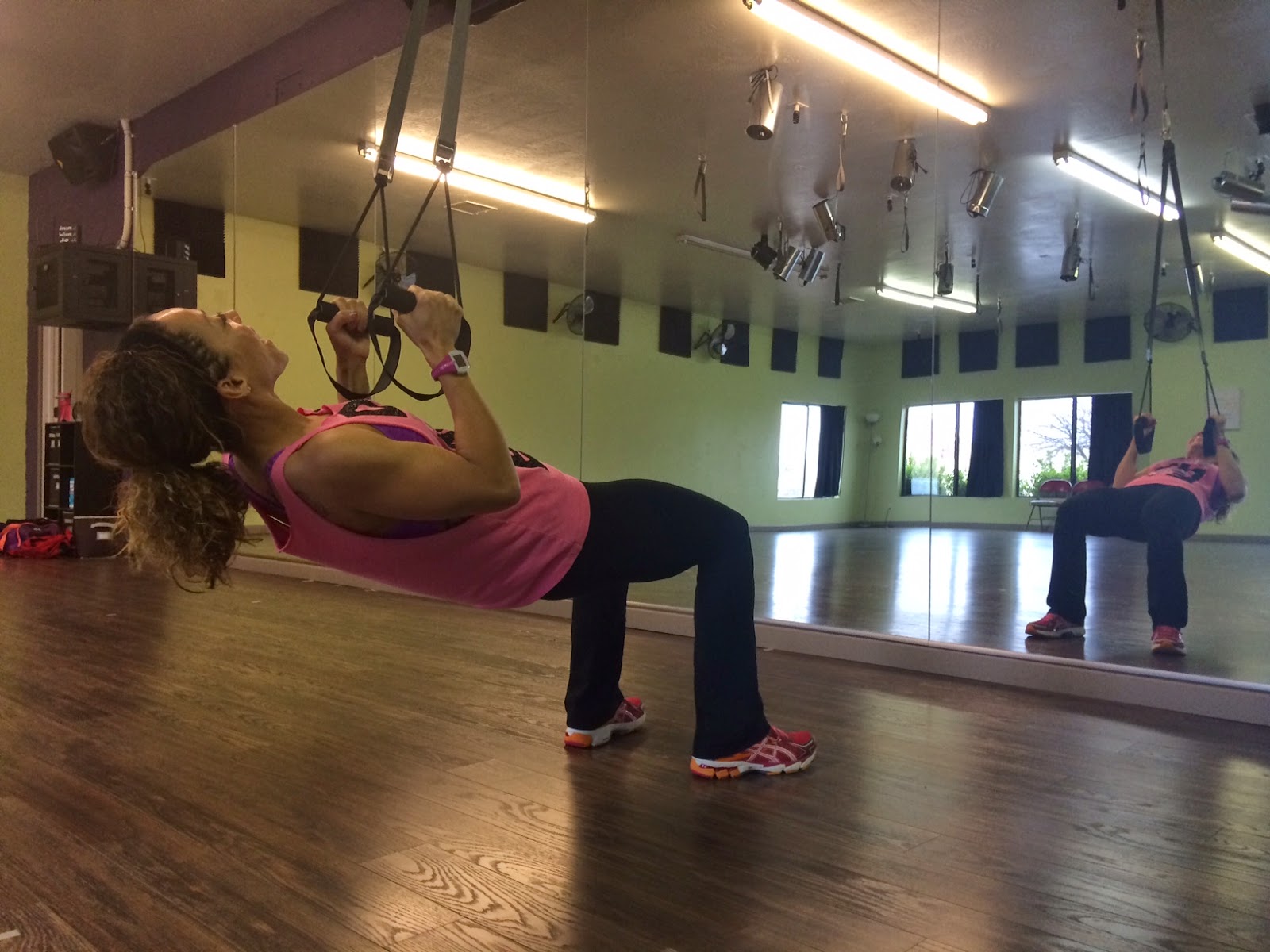 Alexis makes it look soooo easy! It's not!

As a woman who hates exercise, I realize I did have a sort of breakthrough. Modification meant I could work out, and take the challenge presented to my level of fitness (which is still really poor, I'd like to stress.) I took that same attitude into my Tuesday Core Fusion class, a blend of Pilates and yoga.

Having never done Pilates before, and having just one yoga class under my belt, I was a little apprehensive; especially because I was still sore from the workout the day before. I was delighted to be greeted by Sara, who had attended the class the day before with me, and who reported that she was also super sore! That blessed me, knowing I wasn't the only one. As we waited for the prior class to finish, I chatted with the other women. They all spoke very highly of Sasha, and relished the workout to come. I was determined to ""make it work!" 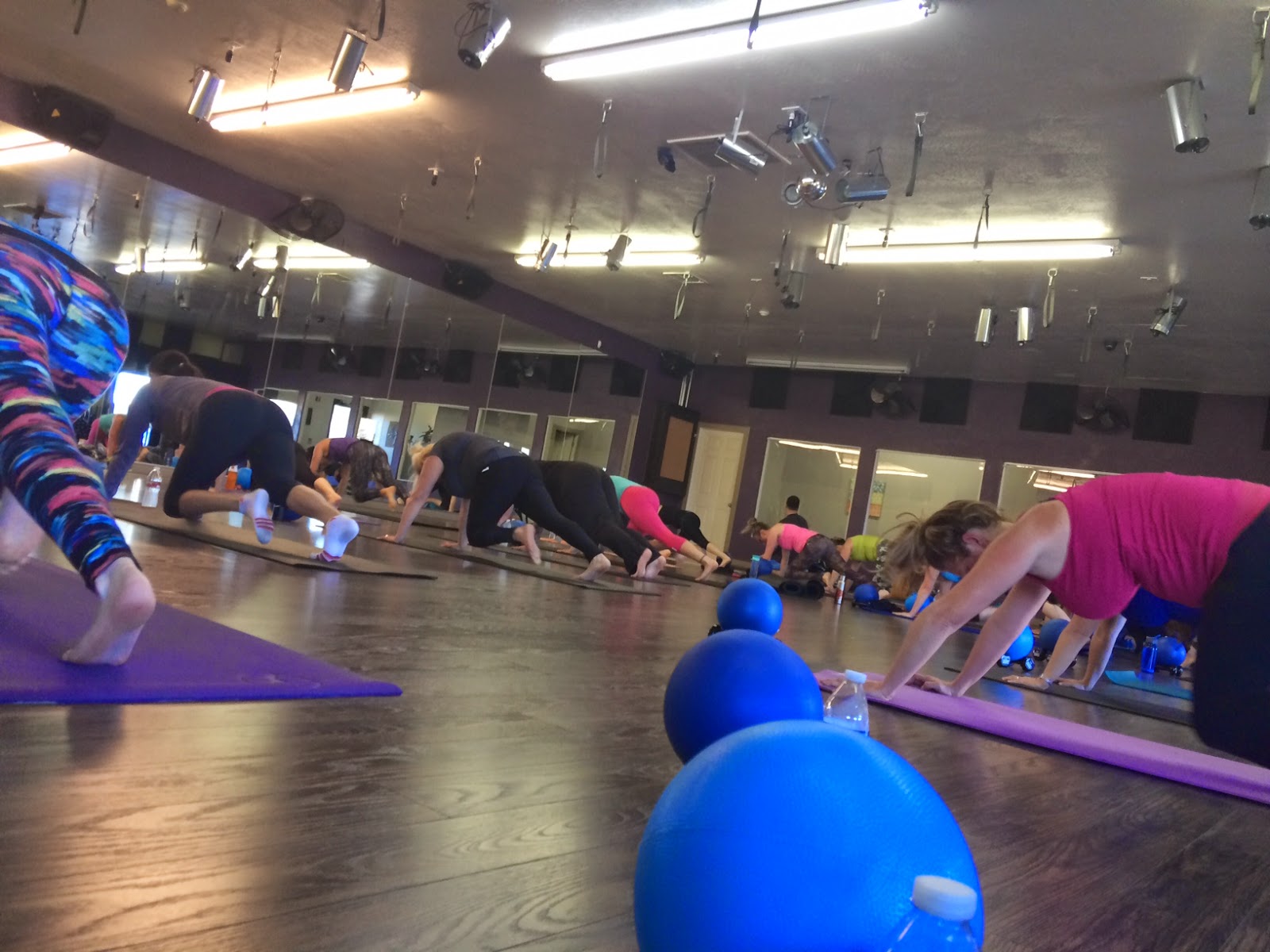 I took this picture after I had collapsed, unable to do another rep.

It was tough. Real tough. I must be honest and say I had a hard time modifying these exercises as the modifications required being on a knee - and mine is still really sore after falling on Thumb Butte last week and having a 2" round scab on it . I realized the struggle at this point was very real. My muscles simply could not complete even ONE of the reps in some sets; I began to feel as if I had made a colossal mistake. I had to fight it. I would not stop. No matter what the movement, I would find some part of it that I could achieve. I looked to the lady on my right. She was struggling. I looked to the lady in front of her. She was struggling. The one in front of me was perfect. To my right, she struggled. None of them gave up - they just kept trying. The music was pumping, Sasha was encouraging - the room of over 25 people kept going, even though only a few matched what Sasha did. Everyone else did what they could-and that was ok. So I did what I could - and it was ok.

Driving home, I worried that it was not enough. These are the very thoughts that have stopped me from exercising in the past, and I knew I had to get through it. Reflecting, I decided I had to chose to focus on what I could do - and in that class, I had PERFECTED squeezing a ball between my knees with my hips bridged high while on my back. Sasha talked about ""going to your happy place" to get through them, and I had found them to be no issue at all. So what if my core was sluggish - that was to be expected after years of neglecting it. The good news was, my lower back hadn't hurt since I started the fitness portion of the quest, and I was seeing changes (although small) in my overall health. Sasha had shared that her ideal client was "one that comes in with an open heart and mind and a desire to better themselves." I determined to put on a fresh outlook and embrace the days ahead; glad to be a (temporary) part of the Fusion of Movement family.

Katie labels herself a Solutions Engineer; she is the creative powerhouse dedicated to supporting and growing small businesses in the Prescott area.  She spent the past twelve years working in sales training and business coaching, specializing in mom & pop shops.  Currently Katie is on a journey to get healthy after a severe concussion and some personal challenges.  Her corresponding blog, Fitness Quest, relates the quirky issues faced when following a  fitness program.  Finally, you can visit and coment on the Quest on Facebook.