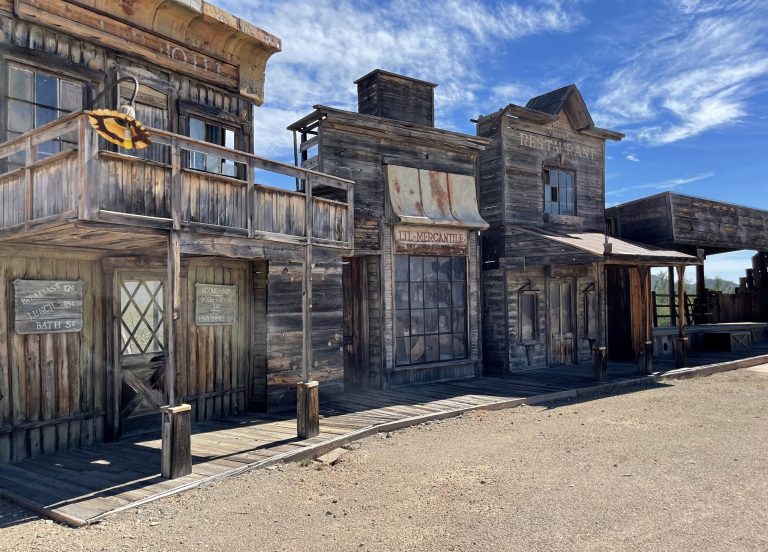 Photo: A variety of facades along Main Street in Old Tucson advertise eateries and general stores that have been in such notable films as “Tombstone” and “Rio Bravo.” Photo taken Oct. 21, 2022. (Photo by Paloma Garcia/Cronkite News)

It’s time again to step back into the Old West of Hollywood, with cowpokes and desperadoes, livery stables and a dirt main street lined with burnt adobe buildings. Historic Old Tucson, which was shut down by COVID-19 in 2020, reopened in October under new management.

In April, American Heritage Railways won the bid to take over the studio and immediately began planning events that would bring people to the southern Arizona landmark. That included a revival of the Halloween event Nightfall, a Christmas event called Yuletide, and Old Town Days.

Old Tucson has been around for 83 years. It began with the 1940 film “Arizona,” for which Columbia Pictures leased land from Pima County and built more than 50 buildings in a little over a month to depict Tucson in the 1860s. In 1960, the property became Old Tucson Studios, a Western theme park and movie set.

“Filming in Tucson actually predates Hollywood,” said Paul Lawton, a historian for Old Tucson. “Several film companies came to Tucson in the early 1910s. About 50 to 60 films were shot in those days. These companies headed to California due to summer heat, and joining other companies in Los Angeles created Hollywood.”

Lawton said Tucson had desirable conditions for filming, including abundant sunlight, access via the Southern Pacific Railroad and a variety of landscapes. A remote location ensured that films remained out of the public eye until filmmakers were ready to show their work, he added.

John Wayne starred in four movies shot at Old Tucson, including “Rio Bravo” and “El Dorado.” Ronald Regan starred in “The Last Outpost” there. Some other classics (not all of them Westerns) filmed at least in part in Old Tucson are “3:10 to Yuma,” “Three Amigos,” “Lilies of the Field,” “Cannonball Run,” “Tombstone” and “A Star Is Born” from 1976. Several television shows, including “Little House on the Prairie,” and commercials also were shot on the Tucson set.

Old Tucson continued to ride the popularity of Westerns, with more than 500 movies filmed there at least in part, even after a huge fire in April 1995 claimed nearly half the set’s buildings.

The only structures that withstood the flames were made of adobe brick, which is indigenous to the Sonoran Desert. Several historic buildings were preserved to keep the traditional set alive.

Lawton pointed to a facade that replicates a building in Tombstone, site of the famous Shootout at the OK Corral in 1881. Preservation is a top priority for Old Tucson, he noted.

After the fire, Old Tucson could not be fully rebuilt because of budget restraints. As a result, Hollywood contracts dried up, but the site kept drawing tourists eager to see where some of their favorite films have been made.

“We are super excited about Nightfall kicking off the holiday season,” Keefner said last month.

Nightfall, which ran Oct. 6 through Oct. 30, offered a haunted walk for people seeking a good scare and an interactive “murder mystery,” in which professional actors altered their script each night so audience members could determine who dunnit.

Yuletide begins Nov. 25 and will run through Christmas Eve, with inspiration from the film “A Christmas Story” experience that includes decorations, carolers and candy.

American Heritage Railways, a tourism company based on the preservation of railroad history, also licenses the Polar Express Christmas train rides in several parts of the country.

“A lot of our production team that came out to help us in Tucson are from LA,” Keefner said. “What they’ve done is make the characters, we have buildings that are like Phoebe’s sweet treats, we have Olsen’s Mercantile.”