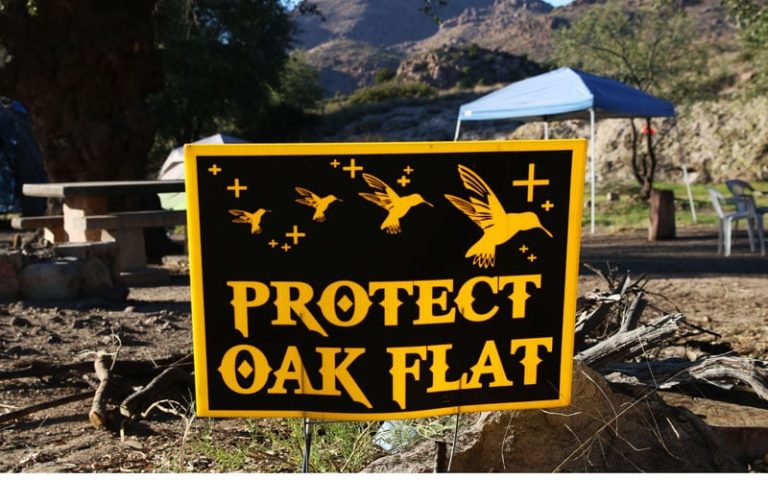 A federal court said Thursday that it will take another look at claims that the proposed Resolution Copper mine should be delayed because it sits on land sacred to the Apache and would violate their religious rights.

The announcement by the full 9th U.S. Circuit Court of Appeals sets aside – for now – two previous federal court rulings that said the mine would not infringe on tribal members’ right to worship, even though it would destroy Oak Flat – reasoning one judge called “flawed” and “absurd” in a blistering dissent.

In a one-paragraph order Thursday, the full court vacated the June ruling by a three-judge panel and said the case would be reheard “en banc” – in front of the full circuit bench – next spring.

Mine supporters called it a “very frustrating day” in the history of the project, which has been almost 20 years in the making. But opponents welcomed the chance to make their case again.

“From our identity to our religion, it’s our existence,” Wendsler Nosie Sr. said of Oak Flat. Nosie, who founded Apache Stronghold to defend the site, said Oak Flat is to the Apache what Mount Sinai is to Jews and Christians.

A spokesperson for Resolution Copper said in a statement late Thursday that it will “respect the legal process and await the 9th Circuit Court’s decision,” but is confident the previous ruling will be upheld. But the mayor of the neighboring town of Superior said the fight over the mine “has gone on for too long” on a project that could bring thousands of jobs to the region.

“This is truly a very frustrating day for us,” said Superior Mayor Mila Besich. “We feel very marginalized by their decision. The fact that the judicial system and internal bureaucratic politics are holding my community back from much-needed jobs is very frustrating.”

Thursday’s announcement is the latest twist for a project that was first proposed in 2004. It gained traction a decade later when then-Sen. John McCain added language at the last minute to the must-pass Defense budget bill that let the federal government give Resolution Copper 2,422 acres of land in southeastern Arizona in exchange for 5,344 acres in the area from the mining company.

Resolution has been working since then to get environmental permits to begin production at the mine. It was days away from getting final approval in early 2021 – under a process that critics say was rushed by the former Trump administration – when the Biden administration withdrew the environmental impact statement for further study.

The Resolution mine could be the largest in North America, providing up to 25% of domestic demand at full production, according to company estimates. It could produce up to 40 billion pounds of copper over 40 years.

That production would add up to $113 million a year in state and local taxes and provide up to 3,700 direct and indirect jobs with an annual payroll of $270 million at full production, the company says.

But those come with a cost. Critics say the mine would threaten endangered species, leave behind toxic mine waste and use massive amounts of water in the drought-plagued region.

The mine would also destroy Oak Flat, leaving behind a crater 1,000 feet deep and up to two miles across on what is now a mesa. Apache Stronghold claimed that would make it impossible for them to worship, violating their religious right.

But a divided three-judge panel of the 9th Circuit disagreed, ruling in June that while the mine “may make it more difficult” to worship at Oak Flat, it would not force the Apache to forego their religious beliefs.

In her dissent, Circuit Judge Marsha Berzon called the majority’s reasoning in the case “illogical,” “incoherent” and “flawed.” She said the ruling led to “an absurd result: blocking Apaches’ access to and eventually destroying a sacred site … does not substantially burden their religious exercise.”

Nosie said Thursday’s announcement that the full court would rehear the case is a relief.

“We can breathe again knowing that there’s a great opportunity to be successful and protect our religion,” he said.

That was echoed by Rep. Raúl Grijalva, D-Tucson, who sponsored the Save Oak Flat Act to block the mine.

“I applaud the decision that will give the San Carlos Apache Tribe opportunity to make their case before the full 9th Circuit,” Grijalva said Thursday. “Oak Flat is a sacred spiritual site that has existed and belonged to their people since time immemorial.”

The case has drawn the attention of a number of legal groups that fight for religious rights, including Becket Law. Senior Counsel Luke Goodrich said the en banc court “has an opportunity to correct its earlier mistake and protect Apache religious exercise at Oak Flat.”

Becket said the full court hearing has been set for late March.

In the meantime, Resolution Copper will “continue our efforts to understand, address and mitigate the concerns raised by others,” said spokesperson Tyson Nansel. He said there is “significant local support” for the project and that Resolution has been working with local communities and tribes “to shape the project, the benefits it can provide and the management of cultural heritage.”

Besich said she thinks there has to be a compromise that would let mining proceed and protect the tribe’s right to worship.

“I don’t think anybody should infringe on one person’s belief or a group’s spiritual beliefs,” she said. “However, we have to have compromises.”

While Nosie is happy with Thursday’s decision, he knows the fight is not over.

“I have to embrace it and be thankful, but we know that we have to continue to keep pushing and teaching our younger ones, so they will make better decisions,” Nosie said.