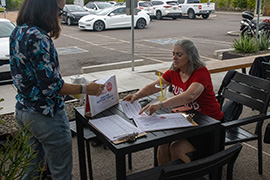 Opponents of the state’s expanded Empowerment Scholarship Accounts filed more than 140,000 petition signatures Friday to temporarily halt the program that would have allowed any student in the state to use public dollars for private education.

“We’ve had petitions just pouring in from all across the state,” said Beth Lewis, executive director of Save Our Schools Arizona, whose office was “incredibly crowded with people” still submitting petitions Friday.

Hours before the deadline to file the petitions with the secretary of state’s office, Lewis said her organization was “anticipating turning in 141,714 signatures” which were collected “all in 80 short days.”

A supporter of the expanded ESA program conceded Friday that opponents had likely collected enough signatures to stall the program, but he said that it was not the end of the fight for expanded vouchers.

“Whatever that takes is what we’re going to do,” said Steve Smith, Arizona state director of the American Federation for Children.

Smith called the petition drive “shameful” and said his organization has “consistently stood behind parents” and will continue to “defend every family that wants this program.”

The program at issue is the sweeping expansion of the state’s Empowerment Scholarship Accounts program that was passed by state lawmakers this year. The ESA program gives state money to children who are attending failing public schools or who have special education needs and lets them use it to attend private or charter schools.

Under the expanded program, that benefit would have been extended to any student in the state, whether or not they are currently in a public school and regardless of income or special education needs. The program would have allotted about $6,500 per student to children in first through 12th grades and about $4,000 to kindergartners.

The Arizona Department of Education said this week that between Aug. 16 and Monday it had received 10,906 applications for the universal ESA program, and that 76% of those applicants did not have children in public schools – or about 8,288 students.

If each of those students got the full $6,500 to attend the school of their choice, it could represent a loss of more than $53 million from public school funding.

In a prepared statement Friday, Lewis called the program another example of how Gov. Doug Ducey and Republican lawmakers “continually work to defund our public schools in service to special interests.” That anger sparked the petition drive that ended Friday.

“We’ve all just been going, going, going. There’s no rest for any of us,” she said. “We were all out getting signatures until, like, midnight last night, but it’s also just a lot of excitement because you know, people are just continuing to pour in well past the deadline.”

Lewis said her group received petitions from every county in the state, “some of them are very rural and very small and populous, and we’re doing tons of signatures from folks there.”

“Because private school vouchers drain so much money from the public school kids, and they have no benefit to children in rural communities,” she said. “Rural voters know, right? They connect the dots.”

The bill’s prime sponsor, Rep. Ben Toma, R-Peoria, did not respond to a request for comment Friday. But Smith and other supporters defend the program, which they say is designed to give parents the ability to choose the best education for their children, regardless of ability to pay.

While the petition drive may be over, the fight is just starting, with the issue now heading to the ballot in 2024.

“I think at the end, these families will be vindicated,” Smith said of ESA supporters. “They will have the power that is rightfully theirs. They will be able to choose the education that best fits their children, and I think they’re gonna win in the end.”

An official with Save Our Schools said the fight starts with this fall’s election for state lawmakers.

“Make no mistake – this battle is not over,” said Nicky Indicavitch, a parent and state outreach director for SOS Arizona.

“First, we must dedicate ourselves to electing pro-public education candidates up and down the ballot this Nov. 8,” she said. “We must stop electing extremists who drive wedges into our communities, ignore the will of our voters, and rob funding from our children.”

PrevPreviousOpinion: What Is ‘Our Democracy?’ – Gregory Hood
NextWhat To Know: New Laws on Education, Public Safety and Water Security Go Into EffectNext