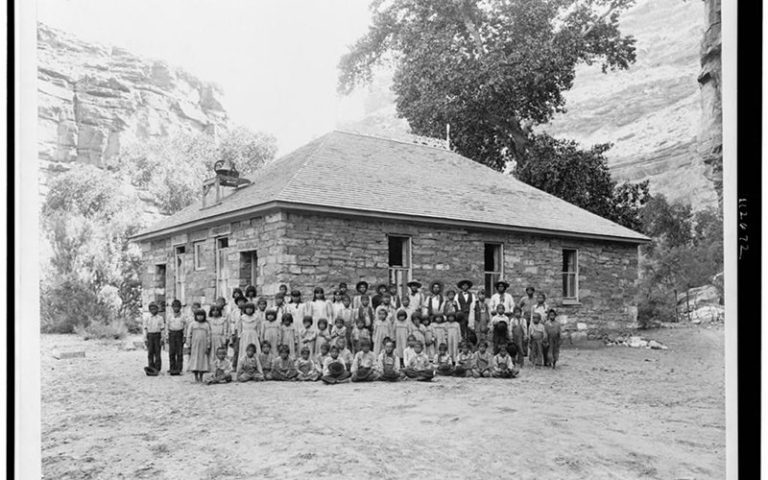 Photo: Children at Havasupai Indian School in Cataract Canyon, Arizona, in 1901.  (Photo courtesy of the Library of Congress)

Few dispute that Indian boarding schools led to more than a century of abuse, systematically seizing Indigenous land, separating children from their families, destroying communities and working to erase tribal languages, religions, cultures and economies. Poor conditions and harsh treatment at the schools are blamed for the deaths of untold numbers of Indigenous children who were supposed to be in the government’s care.

While the abuses were in the past, the schools are not, entirely. Arizona, home to 47 federal Indian boarding schools at one point, still has eight such schools today.

Advocates say the modern schools are not perfect. But they are a far cry from the horrors of the past.

“They’re not run the way the schools were run in 1925,” said Tsianina Lomawaima, of Mvskoke (Creek) descent and a retired professor of Indigenous studies at Arizona State University.

Five of the eight boarding schools in Arizona today are run by the Bureau of Indian Education and the other three are tribally controlled. Since BIE and Native nations took “the helm of operating” the schools, the curriculum has gotten more culturally competent with more of a focus on revitalization and cultural exchange, Curley said.

This was echoed by Haaland in June testimony to the Senate Indian Affairs Committee on the first volume of an Interior Department investigation of the schools. The report outlined abuses at the 408 federal Indian boarding schools that operated in 37 states between the early 1800s and the 1960s.

Haaland said of the modern schools, “A lot … have Native teachers, Native principals, Native superintendents. There is a culturally relevant education for every Native student at every single one of those schools.”

That was not always the case.

Haaland, the first Native American to hold a Cabinet position, ordered the review of the schools, and has embarked on a cross-country listening tour to hear from boarding school survivors. Interior officials said this summer that her tour will stop in Arizona before the end of this year, but they could not say when.

Experts say the previous structure of boarding schools still affects Native communities. Students who attended the schools, and the families they were separated from, often experienced intense trauma, emotional and physical. This type of intense trauma does not just go away, said David Simmons, the director of government affairs at the National Indian Child Welfare Association.

No matter the impact, however, the common factor “of separating families from children, was wrong,” Lomawaima said. Simmons said that 30% to 40% of the children who attended the schools never returned home because they died as a result of “disease or harsh working conditions or different kinds of abuse.”

The Interior investigation identified marked or unmarked burial sites at approximately 53 different schools across the country, a number department investigators expect will increase.

Despite the damage, native communities were resilient and survived. Lomawaima said there “was no one story, there was no one impact” on Indigenous children who attended the schools.

“It ranged from people who, because of their strength and resilience, and their own resources thrived at the schools at certain points in time and places to people who were effectively destroyed by them,” she said.

Lomawaima said there “is no question that they did damage, but they did not entirely succeed in that goal,” of destroying Native life.

Curley pointed to the Navajo Nation as an example of resilience. The Navajo reservation had the majority of federal Indian boarding schools in Arizona, a “strategic” decision by federal authorities who saw in the tribe’s large population a need for “a lot of institutions to assimilate them.” Despite that, he said, the Navajo Nation and its nearly 400,000 members is still vibrant today.

Arizona, with 47 tribal schools in the past, was second only to Oklahoma, which had 76, according to the Interior Department report.

Along with the listening tour and the first volume of the report, advocates hope the government continues to address the legacy of the boarding schools and works to deal with what Simmons called “this historic trauma that many families are living with on a daily basis that has not been addressed properly,”

The House and Senate are both considering bills to establish a Truth and Healing Commission that would investigate the impacts and ongoing effects of the Indian boarding schools and develop recommendations for federal government action.

“It’s righting a wrong and making sure that it never happens again,” said Rep. Tom O’Halleran, D-Sedona, a co-sponsor of the House bill, which passed out of committee in June. “This is our responsibility, I’m pleased to see the movement forward.”

Despite the reforms, Native enrollment in schools has shifted away from boarding schools and toward public schools, where around 95% of Native children are enrolled today, Lomawaima said. Even there, she said, Native students face many challenges, one being that many public schools do not have or require any type of education for Native students to learn about Native language or life.

“Many, many, many public schools don’t have any of those (Native cultural) programs in place,” Lomawaima said. “There’s no one single answer, there’s no one simple answer” on how to best educate Native children.

PrevPreviousOpinion: Volunteers in Ukraine – John Stossel
NextOpinion: Congress Wants to Expand IRS and Give It More of Your Info – Inside SourcesNext