Opinion: The Lost Opportunity of the 1990s – American Renaissance 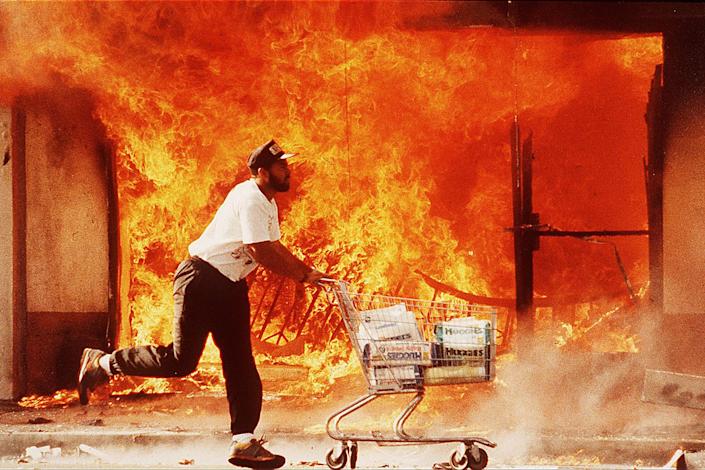 Not surprising. Anyone who grew up in the 90s remembers that race was hardly an issue at all and racism was rarely discussed. Things were fine until the Left ruined it all intentionally. https://t.co/eZyXotJaQR

Matt Walsh is an effective conservative activist. His documentary What Is a Woman? is a clever look at the absurd impulses of transgenderism. He’s even a best-selling children’s author, but he has a mixed record on race.

His tweet above is wrong. The 1990s were hardly a time when Americans didn’t talk about race. Many readers of this site can probably remember incidents from the 1990s that woke them up on race, such as: 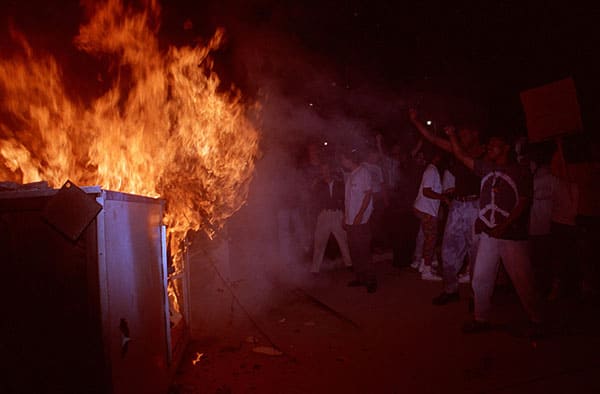 Coverage from the Los Angeles riots after the not guilty acquittal of policemen on trial in beating of Rodney King. In total, 55 people were killed during the riots, more than 2,000 people were injured, and more than 11,000 were arrested and $1 billion in property damage. (Credit Image: © Gene Blevins/ZUMA Wire)

The 1990s were when the “dream” of a post-racial society ended. The O.J. Simpson case showed that blacks would probably always put race before rule of law.

However, Mr. Walsh does have a point, because in the 1990s America still had a mainstream culture. The country was still 79 percent white in 1990. This meant people who pushed anti-white policies had to hide their aims. They couldn’t openly call for Critical Race Theory in public schools, reparations, or deposing the American flag without being laughed at.

What the 1990s may have really been was the last chance to stop multiculturalism. After the American victory in the Cold War, there was confusion about what America was supposed to stand for. “Without the Cold War, what’s the point of being an American?” asked one of John Updike’s characters. Patrick Buchanan may have been the only mainstream political figure who offered a real answer. “The greatest vacuum in American politics is to the right of Ronald Reagan,” he said in 1987, near the end of President Reagan’s second term. He launched two populist challenges to George H.W. Bush, promoting immigration control, English as the official language, noninterventionism, opposition to free trade, and ending affirmative action.

Democracy is not a system that rewards those who tell the truth. Many people thought Mr. Buchanan sounded mean. When he pledged to CPAC in 1992 to “root out the whole rotten infrastructure of reverse discrimination, root and branch,” the Hartford Courant complained:

There is such a thing as principled opposition to affirmative action. A great need in this country is for a dispassionate discussion of the concept — whether it is achieving its purpose or rending the social fabric so as to be destructive in effect.

But Mr. Buchanan, when he stirs the pot of fear and resentment, doesn’t contribute positively to that dialogue. He sounds somewhat like David Duke, who stands outside the margin of political respectability.

In 1991, David Duke was elected to the Louisiana legislature. The paleoconservative intellectual movement — with writers such as Murray Rothbard, Sam Francis, Paul Gottfried, and Thomas Fleming — challenged Conservatism Inc. The “Republican Revolution” in 1994 was a real opportunity to check liberalism and the growth of federal power.

Despite President Ronald Reagan’s 1996 amnesty for illegal immigrants — which leftist historians will probably call the most important thing he ever did — there was also still a chance to stop mass immigration. In 1994, California voters overwhelmingly passed Proposition 187, to end public education and benefits for illegal immigrants — only to see its provisions gutted by judges.

Likewise in 1994, Barbara Jordan — the first black woman to give the keynote address at a Democratic National Convention — headed a congressional commission on immigration that proposed policies well to the right of what President Donald Trump accomplished in office. The year before, Senator Harry Reid (D-NV) said “no sane country” would allow birthright citizenship.

Shakespeare wrote in Julius Caesar, “There is a tide in the affairs of men. Which, taken at the flood, leads on to fortune.”

Conservatives didn’t act. California Governor Gray Davis, a Democrat, refused to appeal the ruling against Proposition 187. He ended his term in disgrace after a recall, but any future Aztlán should honor him as a founding father. Governor Arnold Schwarzenegger didn’t stop the transformation of California and could be the state’s last Republican governor. Newt Gingrich and his supposedly “revolutionary” Republican Congress shied away from a federal ban on racial discrimination against whites and Asians.

The 1990s also had real debates on immigration and race that are now impossible.

With the appearance of this book, the public debate about immigration has finally approached the full dimensions that taboos have denied it. After years of letting themselves be silenced by anyone willing to equate immigration control with “racism,” a prominent advocate of border controls has at last called the other side’s bluff. Of course race is an issue, explains Mr. Brimelow, and whites have every right to oppose dispossession by nonwhites.

Republicans did not act. The border stayed open, even after the terrorist attacks of September 11, 2001. Today, America is on the brink of becoming a minority-majority country, and it is a real question whether we can call it a “nation” at all.

In 1994, Richard J. Herrnstein and Charles Murray wrote The Bell Curve, which examined the importance of IQ and touched on race. “Touched on,” because it was not a book about race, but race and IQ dominated the widespread coverage. There would be no such debate today.

There were other serious books on race, IQ, and ethnicity:

We could also add books just before and after the 1990s.

These and other books did not open the door for more discussion. They seemed to scare our rulers into shutting down debate. MSNBC expelled Pat Buchanan because network president Phil Griffin said “the ideas he put forth aren’t really appropriate for national dialogue, much less the dialogue on MSNBC.”

Free speech has been further crushed since Donald Trump’s 2016 victory. It is because these issues are important that our rulers didn’t want them discussed, and Conservatism Inc. quietly went along. The same people still run the conservative movement, which explains why its “movement” is always backwards.

In 2000, journalists Peter Brimelow and Steve Sailer had noted on their VDARE.com web page that discussion of IQ and race had actually become more difficult as the 1990s progressed. Daniel Seligman, who had written a very readable little volume on the IQ debate in 1992 called A Question of Intelligence, also thought the atmosphere for discussing IQ and race had deteriorated. In his view, the liberal-left had shouted down all serious talk of IQ and had thereby “won” the argument. Ron Unz, who has campaigned to eliminate “bilingual education,” thought America’s intellectual elite had become significantly more frightened to talk about IQ since 1994.

Matt Walsh is right that to say that during the 1990s Americans still had a culture and that we didn’t have to hear about race all the time. However, that implied unity required a white supermajority, which is probably gone forever. We had the “woke” then as we do now; they just don’t have to hide behind “colorblind” rhetoric anymore. Even in the 1960s, Martin Luther King didn’t believe in “colorblindness” any more than in his marriage vows.

Conservatives should be asking why Republicans didn’t end all this nonsense when they could have. They were foolish and cowardly. Now, it’s not clear that America can — or should — be saved. The political and demographic threats are worse than ever. Our advantage is that fewer have any illusions about what is at stake. Let’s hope Mr. Walsh and others catch up.