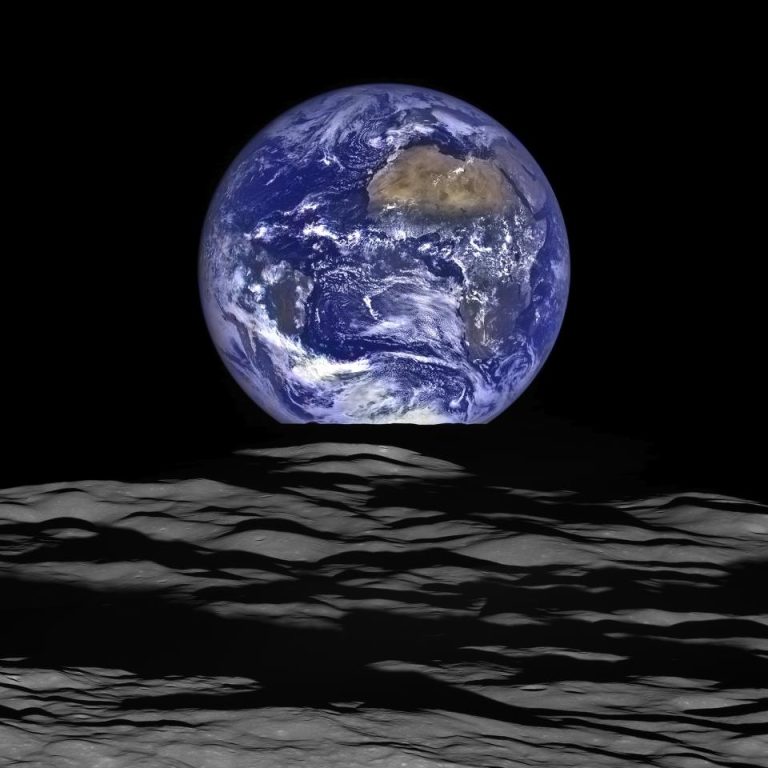 Earth rising over the moon in a photo captured by the Lunar Reconnaissance Orbiter operated by ASU. Photo courtesy NASA/Goddard Space Flight Center/ASU

Scientists around the world dream of being part of a NASA science mission. Few projects carry the vigor and prestige of exploring scientific questions that can be answered only with a view from and into space.

And thanks to Arizona State University’s connection to the Lunar Reconnaissance Orbiter, or LRO, students from the Ira A. Fulton Schools of Engineering have gained insight into space exploration without ever leaving campus.

The LRO is one of more than 90 operating NASA missions, and is currently orbiting the moon with the primary objective of making fundamental discoveries about our closest celestial neighbor.

The LRO has been equipped with seven instruments, one of which is the Lunar Reconnaissance Orbiter Camera, or LROC. This three-camera system is mounted on the LRO to capture the moon’s surface in high-resolution black and white images and moderate-resolution, multi-spectral images allowing scientists to see beyond what is visible to the human eye.

The Lunar Reconnaissance Orbiter Camera Science Operations Center, or LROC SOC, is housed at ASU as part of the university’s School of Earth and Space Exploration. This proximity is what has created an incredible opportunity for engineering students.

Fulton Schools students operate in different areas of the center, performing tasks related to software, modeling and image creation from data. The variety of learning opportunities available to students help prepare them for various roles after graduation.

“I think students who can say they’ve been a part of an active spacecraft mission, collecting or processing data from a NASA satellite moving around the moon, stand out that much more to potential employers,” says Nick Estes, the LROC SOC manager at ASU.

Recently, images captured by NASA’s James Webb Space Telescope have garnered headlines and captured the attention of people around the world. According to Estes, in a general sense, there are some parallels between the work happening at the LROC SOC and the images coming from the Webb telescope.

“It’s all about exploring our universe and expanding our knowledge of how it all works,” Estes says.

“At a more detailed level, the differences between lunar exploration and astronomy are pretty pronounced. That said, you have a lot of kids who grew up watching astronauts on the International Space Station, watching rocket launches and gazing up at the stars, and which particular field they head off to frequently depends on the opportunities available to them in school.”

Engineering photos of the moon

Seth Grieser, a senior who is double-majoring in mechanical engineering and earth and space exploration (exploration systems design), has a unique view of the moon through his work in the center. Using Narrow Angle Camera images, he creates accurate, high-resolution mosaics of regions of interest on the moon.

“I use computer software to combine image pairs into a single mosaic,” Grieser says. “Between image pairs in a mosaic, there is a seam where the software combines the images. Sometimes the lighting conditions or the terrain of the moon doesn’t blend properly. My responsibilities are to correct these flaws as best I am able and to fix any other mistakes or errors with the mosaics before their release to the public.”

These mosaics can be used to assist in finding landing sites for future moon missions or to collect scientific data, such as the number of craters or the elevation of a site researchers may be interested in exploring. For every measurement, it is important that researchers are as accurate as possible.

Grieser says that his experience as an engineering student has helped him be successful in his multidisciplinary work at the LROC SOC.

“The professors in the Fulton Schools often emphasize how to detect issues that arise and methods to fix these problems,” Grieser says. “As an engineer and in my role (at the LROC center), solving problems as a team is often the best approach, and only by working together can large assignments be completed.”

The Phoenix native developed an interest in space at an early age and says that since he was in kindergarten it’s been his dream to work as an engineer on a space mission.

“I was honestly shocked after working a few months at the LROC SOC about how fascinating the moon is,” Grieser says. “The thousands of craters, big and small, along with the huge crater rims and mountains, hundreds of feet high, challenged the notion I had that the moon would be a boring place to explore. Looking up in the night sky, I now view the moon as extremely diverse and complex geologically.”

Alex Huft, a third-year computer science student with a software engineering specialization, considers himself an amateur astronomer in his free time. So, working as a student developer at the LROC SOC has been a great fit for him, combining his passion for programming with his interest in space exploration.

“My work can range from analyzing spacecraft data using Python and creating scripts to help my co-workers automate tasks to writing a new application to create calibration files for the Narrow Angle Cameras on the LRO,” Huft says. “Everyone is communicative and understanding (at the LROC SOC). Even when something has to get done, there is never a feeling of pressure. Everyone takes pride in the work they do here and always do the best they can.”

Huft says a pair of Fulton Schools faculty members have had the greatest impact on him thus far: Lecturer Justin Selgrad and Associate Professor Adam Doupé, both of whom are computer science and engineering faculty members in the School of Computing and Augmented Intelligence, one of the seven Fulton Schools.

“Professor Selgrad’s C++ assignments, while very involved, gave me a better understanding of C++ as a (programming) language and helped me with a recent application in my work,” Huft says. “Professor Doupé gave me an extreme appreciation for cybersecurity and cemented in me that this is what I wanted to go into as a career.”

“I feel really lucky to be in such a beneficial environment for my learning and the immense amount of experience I am gaining just by being here at the LROC SOC,” Huft says.

Launching students to their careers

The LROC Science Operations Center being located on ASU’s Tempe campus enables a mutually beneficial relationship between students and researchers who are committed to NASA’s science mission.

“It’s definitely a great benefit for our operations to have a pool of talented students available to hire,” Estes says. “When the students go off to start their careers, it’s sometimes hard to get your foot in the door, and their experience working here helps to make them stand out to potential employers. In return, we get to benefit from their different experiences and fresh ideas.”

Students interested in working on LROC or ShadowCam can keep an eye on the ASU student job board, which includes a variety of roles in programming, business assistance, research tasks and working in the LROC stereo lab.

“Whenever possible, we let our student workers work on the types of things they’re most interested in, and we combine that with a lot of mentoring,” Estes says.