Opinion: Starbucks Gets What it Asked For – Gregory Hood 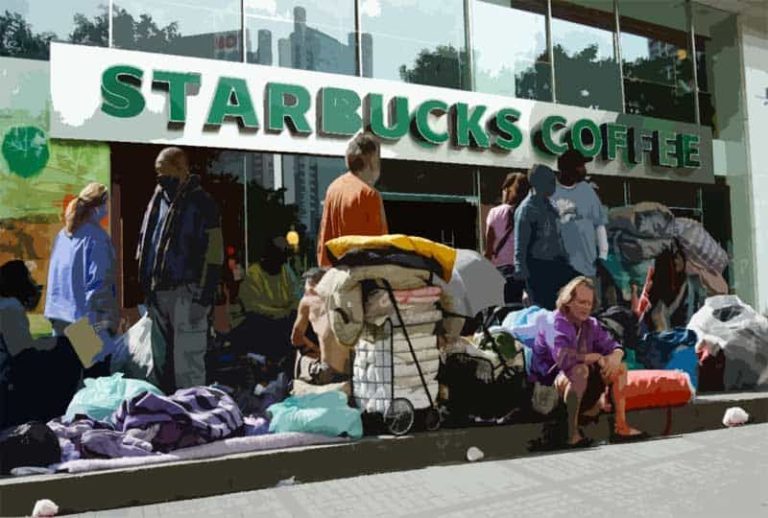 It’s an iconic duo: urban liberals and Starbucks. Wherever you are, you can almost always find a Starbucks and a group of lefties.

In 2015, when the “Great Awokening” began, Starbucks challenged Americans to talk more about race. They did not mean for Americans to talk about it the way American Renaissance does. “Of the hundreds of large companies that truckle to racial orthodoxy, Starbucks might be the worst,” said Martin Rojas in 2020. CEO Howard Schultz even considered running for president in 2012, 2016, and 2020. Starbucks is Woke Capital at its worst.

However, Starbucks could never overcome a fatal contradiction. The company represented upscale urban living, a refuge from the seedier realities of the city. Starbucks coffee is expensive, perhaps a deliberate choice to weed out undesirable customers; a survey in 2013 found customers cared more about good service than good coffee.

Urban liberals have never had trouble championing people they avoid. Few of them want to be surrounded by poor blacks or mentally ill vagrants as they display social status at Starbucks. Unfortunately for them, racial realities are breaking down the polite hypocrisies that let white liberals live with their illusions.

In 2018, a hapless Starbucks manager in Philadelphia, apparently a liberal feminist, called the police on “two gentlemen in my café that are refusing to make a purchase or leave.” They were black, so this became a national story with far more coverage than a triple murder. Starbucks groveled. Then CEO Kevin Johnson personally apologized to the two blacks, closed the chain nationwide for a day of “racial-bias training,” and changed its bathroom policy so anyone could use them and stay as long as he liked. 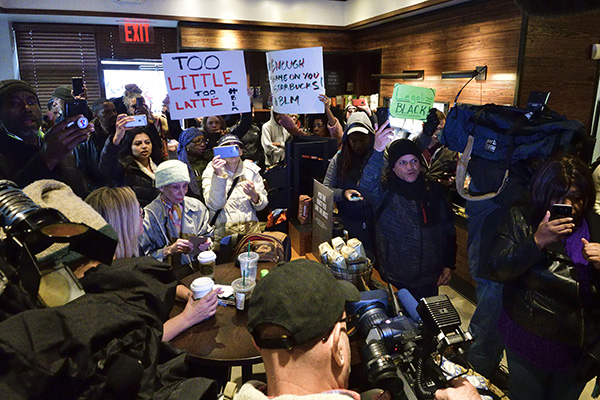 Ultimately, it’s not about Starbucks, but about the contradiction urban white liberals live by. They view their politics as a status symbol that shows their superiority over other whites. Brands such as Starbucks cater to this self-image. At the same time, white liberals love what [Jamelle] Bouie calls “white spaces” that are orderly, efficient, quiet, and pleasant. Such spaces have to be policed to keep the riff-raff out, and the riff-raff tend to be non-white.

However, if progressive political ideals mean those places can’t be policed, they will be overrun. White liberals will look for new places to patronize. They will never admit the racial motivation behind their actions any more than Starbucks will, but it doesn’t change the company’s reliance on white consumers.

Sometimes, I hate being right. Not this time. Starbucks has been overrun.

Even CEO Howard Schultz is now complaining about what’s happening in his stores. “I must say, in my view at the local, state and federal level, these governments across the country and leaders, mayors, and governors, city councils have abdicated their responsibility in fighting crime and addressing mental health,” he reportedly said in a meeting.

Antifa have smashed stores during protests, including the first Starbucks store ever, but the big problem is bums and vagrants who come in and don’t buy anything. They occasionally attack customers and staff, so Starbucks may end its open-bathroom policy. “We have to harden our stores and provide safety for our people,” said the CEO. “I don’t know if we can keep our bathrooms open.” He blamed the “mental health crisis” and admitted that “there is an issue of safety in our stores, in terms of people coming in who use our stores as a public restroom.”

[North Park is in San Diego]

The inevitable result? Starbucks is closing 16 “not unprofitable” stores because of “safety concerns.” Six are in the Los Angeles area, six in the Seattle area, two in Portland, one in Washington DC, and one in Philadelphia. CNBC reports that the company’s complaints about crime in Seattle and Los Angeles are justified:

In Seattle, property crimes, which include car theft, larceny theft and burglary, and violent robberies are up nearly 20% for the first five months 2022 from the year-earlier period, according to the Seattle Police Department.

In Los Angeles, those types of crimes are up citywide more than 14% for the first six months of 2022 compared to the same period last year, according to the Los Angeles Police Department.

In West Hollywood, however, those figures are much higher: Property crimes and violent robberies have more than doubled in 2022 from 2021, according to the LA County Sheriff.

You know things are bad when even CNN says, “Starbucks can’t be America’s public bathroom.” Starbucks’ stock is down by more than 31 percent this year. Mr. Schultz said many more stores will close.

“Starbucks is a window into America,” Mr. Schultz said in his internal meeting. “We are facing things in which the stores were not built for.”

This is true of the whole country. Our rulers take for granted things such as high levels of trust, energetic and competent police, and general agreement that homeless camps and property crimes are bad. Our society is a gift from our ancestors, who suffered for centuries to build a civilization that protected life, liberty, and property. Our rulers have thrown that away.

Mr. Schultz is among those rulers. He’s used his money and power to dynamite the foundations of our society, and now has the nerve to blame a government that hardly has all the power. Media, NGOs, and activist organizations use the government as a tool. It was public protests over the 2018 arrest of two blacks that changed Starbucks’s policy and wreaked havoc.

Mr. Schultz shares the blame, but I doubt he will learn anything. He’ll close some stores, but there are still neighborhoods where urban liberals can buy expensive coffee and complain about Donald Trump.

Starbucks’ hypocrisy can’t go on forever. At some point, you can’t keep running from problems. You also can’t dodge responsibility for your actions. Starbucks employees are under siege partially because of the political, cultural, and social changes Starbucks has supported for decades. I’d laugh, except that these changes hurt us too.

For now, we can boycott these homeless camps. Support companies that support our people. I’ll have a interview with one such company soon. If we want a nation of our own, we need to start with institutions of our own and ignore the others. Leave Starbucks to its fate.

1 thought on “Opinion: Starbucks Gets What it Asked For – Gregory Hood”