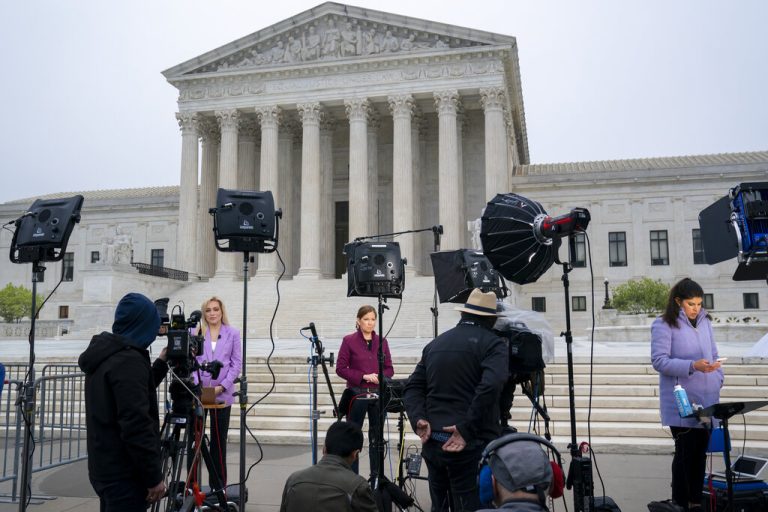 Photo: Television news crews stand at the Supreme Court, May 3, 2022, in Washington, following news report by Politico that a draft opinion suggests the justices could be poised to overturn the landmark 1973 Roe v. Wade case

Less than 24 hours after the unprecedented leak of the draft opinion that overturned Roe v. Wade, Chief Justice John Roberts ordered an investigation into the “egregious breach. ”

The court also won’t say whether the leaker has been identified or whether anyone has been disciplined.

Or whether an outside law firm or the FBI has been called in.

Or whether the court will ever offer an accounting of what transpired.

Or whether it has taken steps to try to prevent a repeat.

To these and other emailed questions, Supreme Court spokeswoman Patricia McCabe said by email: “The Court has no comment.”

Roberts announced the investigation on May 3, the day after Politico published its explosive leak detailing the draft of Justice Samuel Alito’s opinion. Court Marshal Gail Curley was tapped to lead the investigation.

The story filled the airwaves, news pages and online comment sections. There were calls for impeachment if a justice was involved. Senate Republican leader Mitch McConnell of Kentucky said the leak was a pressure campaign to “sway” the outcome and he suggested the “lawless action should be investigated and punished to the fullest extent possible.”

Justice Clarence Thomas, the longest tenured member of the court, said the court had been irrevocably harmed. “When you lose that trust, especially in the institution that I’m in, it changes the institution fundamentally. You begin to look over your shoulder. It’s like kind of an infidelity that you can explain it, but you can’t undo it.”

If any justice was swayed, it didn’t manifest itself in a visible way. The draft was largely incorporated in Alito’s final opinion, which added in responses to points made by the dissenting justices, and on June 24, a conservative majority of the court overturned Roe and eliminated a nearly 50-year-old right to abortion.

Abortions have largely stopped in at least nine states, and the decision is expected to lead roughly half the states to ban or severely restrict abortions.

The court finished its work for the summer on June 30, after which the justices’ law clerks began leaving for their next jobs. That means roughly three dozen people who likely had access to the draft opinion, out of about 70 in all, are no longer within easy reach of investigators.

“There’s just so many other things the marshal’s office needs to worry about right now that’s far more important than the leak. The justices’ safety is under threat probably more now than in years past,” Roth said.

The security concerns reached alarming levels in early June, when police arrested an armed man near Justice Brett Kavanaugh’s house after he called 911 and said he was going to the kill Kavanaugh.

The courthouse has been closed to the public since March 2020, a combination of the coronavirus pandemic and threats to the court and the justices that led, shortly after the leak, to the installation of 8-foot-high, hard-to-climb fencing.

There’s little precedent in Supreme Court annals for the leak and investigation.

“This was a singular and egregious breach of that trust that is an affront to the Court and the community of public servants who work here,” Roberts said when announced the investigation.

In 1973, Chief Justice Warren Burger was infuriated by the leak of the outcome of the Roe case a few hours ahead of its announcement. Burger threatened to subject employees to lie detector tests, but the leaker quickly came forward and explained it had been an accident.

If the leak of the Alito draft was deliberate, it might have been from someone who was so upset by the prospect of overturning Roe that informing the public at the earliest possible moment was of paramount importance.

Or it could have come from a supporter of the decision who worried that one of the five justices in the majority was wavering. In this scenario, the leak was intended to make it harder for a justice to vote to leave Roe standing, if significantly weakened.

The public might never know. Then again, Supreme Court clerks often go on to prominent legal jobs. Six of the nine justices once served as law clerks.

Sometime in the next few decades, one or more of them might appear for a confirmation hearing for a judgeship or some other high-ranking government job where they might be asked if they leaked the document or know who did.

For AP’s full coverage of the Supreme Court ruling on abortion, go to https://apnews.com/hub/abortion