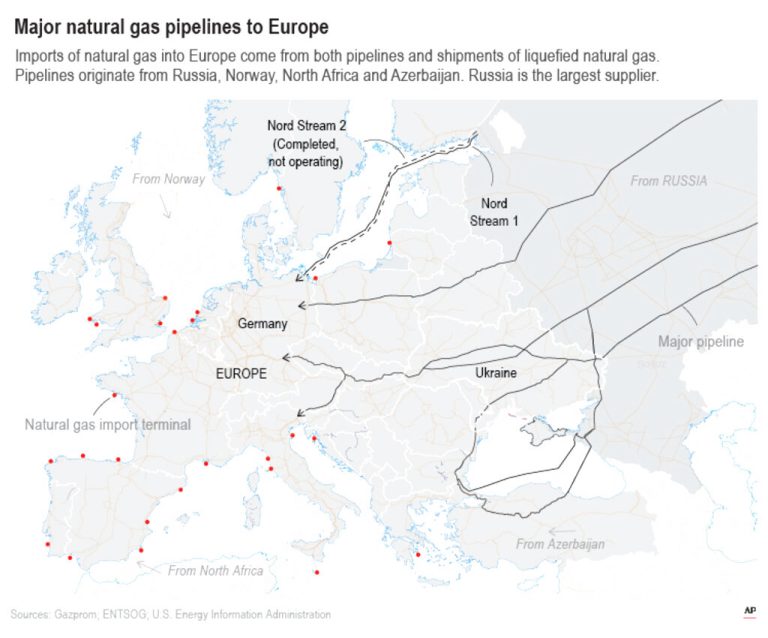 Europe faced an energy crisis even before drama emerged about the Nord Stream 1 pipeline reopening from Russia to Germany.

While natural gas started flowing again Thursday after the major pipeline shut down for 10 days of maintenance, Europe will still struggle to keep homes warm and industry humming this winter.

That is because Russia has already slashed Europe’s amounts of natural gas used to power factories, generate electricity and heat homes in the winter, and Russian President Vladimir Putin has warned they could keep dwindling.

Deliveries through Nord Stream 1 were cut by 60% before annual repairs began and were expected to stay well below the pipeline’s full capacity. Government officials had feared the pipeline may not reopen at all, saying Putin is using energy for political leverage in his confrontation with the European Union over the war in Ukraine.

Here are key things to know about Europe’s energy crisis:

DID RUSSIA CUT OFF GAS TO EUROPE?

Flows into Germany, the EU’s biggest economy, through Nord Stream 1 were dialed back by two-thirds, with Russia blaming a part that was sent to Canada for maintenance and not returned due to sanctions. European leaders rejected that claim, calling it a political move to create uncertainty and spike energy prices.

It has left the 27-member EU scrambling to fill gas storage ahead of winter, when demand rises and utility companies draw down their reserves to keep homes warm and power plants running.

The EU’s goal is to use less gas now to build storage for winter. Europe’s gas reserves are only 65% full, compared with a goal of 80% by Nov. 1.

WHY IS RUSSIAN NATURAL GAS SO IMPORTANT?

Russia supplied some 40% of Europe’s natural gas before the war. That has dropped to around 15%, sending prices through the roof and straining energy-intensive industries.

Gas is used across a range of processes that most people never see — to forge steel to make cars, make glass bottles and pasteurize milk and cheese.

Companies warn that they often can’t switch overnight to other energy sources such as fuel oil or electricity to produce heat. In some cases, equipment that holds molten metal or glass is ruined if the heat is turned off.

High energy prices are already threatening to cause a recession in Europe through record inflation, with consumers having less to spend as costs rise for food, fuel and utilities. A complete cutoff could deal an even heavier blow to an already troubled economy.

WHAT IS THE NORD STREAM 1 PIPELINE?

It is the major European natural gas pipeline that runs under the Baltic Sea from Russia to Germany and is Germany’s main source of Russian gas.

The head of Germany’s network regulator, Klaus Mueller, tweeted that gas deliveries could reach the pre-maintenance level of some 40% on Thursday.

Even with Nord Stream 1 resuming at reduced levels, Europe would need to save 12 billion cubic meters of gas, the equivalent of 120 LNG tankers, to fill its storage levels by winter.

Three other pipelines bring Russian gas to Europe, but one through Poland and Belarus has been shut down. Another, through Ukraine and Slovakia, is still bringing reduced amounts of gas despite the fighting, as is one through Turkey into Bulgaria.

Since the invasion, Russia’s revenue from exporting oil and gas to Europe has doubled over the average from recent years, to $95 billion, the Paris-based IEA said.

The increase in Russia’s energy revenue in just the last five months is three times what it typically makes by exporting gas to Europe over an entire winter.

So Putin has cash in hand and could calculate that painful utility bills and an energy recession could undermine public support for Ukraine in Europe and increase sentiment for a negotiated settlement in his favor.

“Based on what we have seen over the past year, it would be unwise to exclude the possibility that Russia could decide to forgo the revenue it gets from exporting gas to Europe in order to gain political leverage,” IEA Executive Director Fatih Birol said.

Indeed, Putin said Tuesday that the flow of gas through Nord Stream 1 would decline even further if the turbine that was sent to Canada for repairs wasn’t returned by late July, when another turbine would shut down for maintenance. Canada has said it gave permission to return the part that powers a compression station.

“Our partners are trying to shift the blame for the mistakes they made to Russia and Gazprom, but it’s absolutely unfounded,” Putin said.

WHAT CAN EUROPE DO?

The EU has turned to more-expensive liquefied natural gas, or LNG, which comes by ship from places like the U.S. and Qatar. Germany is fast-tracking construction of LNG import terminals on its North Sea coast, but that will take years. The first of four floating reception terminals is to come online later this year.

But LNG alone can’t make up the gap. The world’s LNG export facilities are running at full capacity amid tight energy markets, and there’s no more gas to be had. An explosion at a U.S. terminal in Freeport, Texas, that sent most of its gas to Europe took 2.5% of Europe’s supply offline overnight.

Conservation and other energy sources are key. For example, Germany is running coal plants longer, creating a gas auction system intended to encourage conservation, and resetting thermostats in public buildings.

The European Union on Wednesday proposed that member states voluntarily cut their gas use by 15% over the coming months. The European Commission, the EU’s executive arm, is seeking the power to impose mandatory reductions across the bloc if there’s a risk of a severe gas shortage or an exceptionally high demand.

EU member states will discuss the measures at an emergency meeting of energy ministers next Tuesday.

Countries have been scrambling to secure alternative energy supplies, with leaders of Italy, France and the European Union sealing deals with their counterparts in Algeria, Azerbaijan and the United Arab Emirates this week.

COULD PEOPLE FREEZE THIS WINTER?

It’s unlikely homes, schools and hospitals will lose heat because governments are required to impose rationing first on businesses. The German government also could allow gas suppliers to immediately pass on increases to customers.

The choices could include torpedoing industry and/or socking consumers with even higher bills.

The IEA recommends European countries step up campaigns people to conserve at home and plan to share gas in an emergency. And time is getting short.

“European leaders need to be preparing for this possibility now to avoid the potential damage that would result from a disjointed and destabilizing response,” Birol said. “This winter could become a historic test of European solidarity — one it cannot afford to fail — with implications far beyond the energy sector.”