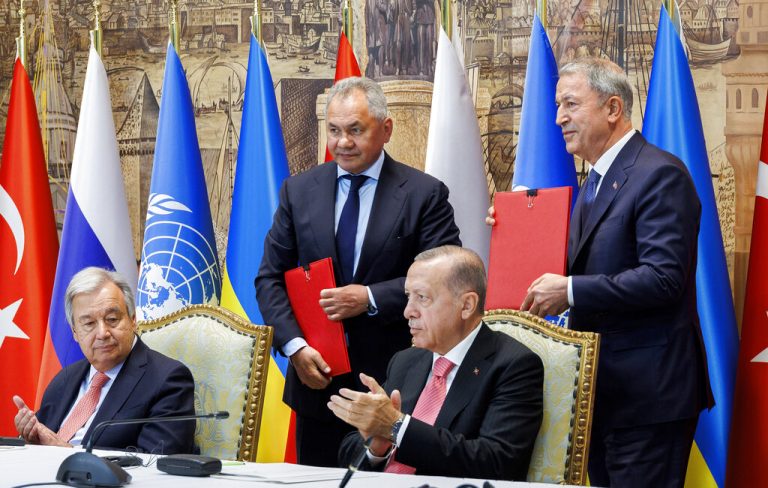 Russia and Ukraine signed separate agreements Friday with Turkey and the United Nations clearing the way for the export of millions of tons of desperately needed Ukrainian grain — as well as some Russian grain and fertilizer — across the Black Sea. The long-sought deal ends a wartime standoff that has threatened food security around the globe.

The U.N. plan will enable Ukraine — one of the world’s key breadbaskets — to export 22 million tons of grain and other agricultural goods that have been stuck in Black Sea ports due to Russia’s invasion. U.N. Secretary General Antonio Guterres called it “a beacon of hope” for millions of hungry people who have faced huge increases in the price of food.

“A deal that allows grain to leave Black Sea ports is nothing short of lifesaving for people across the world who are struggling to feed their families,” said Red Cross Director-General Robert Mardini. He noted that over the past six months, prices for food have risen 187% in Sudan, 86% in Syria and 60% in Yemen, just to name a few countries.

Russian Defense Minister Sergei Shoigu and Ukrainian Infrastructure Minister Oleksandr Kubrakov signed separate, identical deals Friday with Guterres and Turkish Defense Minister Hulusi Akar at a ceremony in Istanbul that was witnessed by Turkish President Recep Tayyip Erdogan. Russia and Ukraine would not sign any deal directly with each other.

“Today, there is a beacon on the Black Sea,” Guterres said. “A beacon of hope, a beacon of possibility, a beacon of relief in a world that needs it more than ever.”

“You have overcome obstacles and put aside differences to pave the way for an initiative that will serve the common interests of all,” he told the envoys.

Guterres described the deal as an unprecedented agreement between two parties engaged in a bloody conflict. Erdogan hoped it would be “a new turning point that will revive hopes for peace.”

“I’m not opening a bottle of champagne because of this deal,” Kuleba told The Associated Press. “I will keep my fingers crossed that this will work, that ships will carry grain to world markets and prices will go down and people will have food to eat. But I’m very cautious because I have no trust in Russia.”

Ukrainian President Volodymyr Zelenskyy echoed Kuleba’s concerns in his nightly video address, saying, “It is clear to everyone that there may be some provocations on the part of Russia, some attempts to discredit Ukrainian and international efforts. But we trust the UN.”

The European Union and the U.K. immediately welcomed the news.

“We will be watching to ensure Russia’s actions match its words,” Truss said. “To enable a lasting return to global security and economic stability, (Russian President Vladimir) Putin must end the war and withdraw from Ukraine.”

African leaders, whose countries import food and fertilizer from Ukraine and Russia, also welcomed the deal, with South African President Cyril Ramaphosa saying “it has taken much too long.”

Ukraine is one of the world’s largest exporters of wheat, corn and sunflower oil, but Russia’s invasion of the country and naval blockade of its ports have halted shipments. Some Ukrainian grain is transported through Europe by rail, road and river, but the prices of vital commodities such as wheat and barley have soared during the war.

Although international sanctions against Russia did not target food exports, the war has disrupted shipments of Russian products because shipping and insurance companies did not want to deal with Russia.

The agreement, obtained by the AP, says a U.N.-led joint coordination center will be set up in Istanbul staffed by officials from Ukraine, Russia, Turkey to run the plan, including scheduling cargo ships’ arrivals and departures.

Inspectors representing all parties at the Bosporus in Turkey will search vessels entering and leaving Ukrainian ports to ensure no weapons or soldiers are on board.

Under the deal, “all activities in Ukrainian territorial waters will be under authority and responsibility of Ukraine,” and the parties agree not to attack vessels and port facilities involved in the initiative. If demining is required to make the shipping lanes safe, a minesweeper from another country could clear the approaches to Ukrainian ports.

The sides will monitor the movement of ships remotely and no military ships. aircraft or drones will be allowed to approach “the maritime humanitarian corridor” closer than a distance the center sets. The agreement will remain in effect for 120 days and can be extended automatically.

Guterres believes grain shipments could start “within the next two weeks,” according to U.N. deputy spokesman Farhan Haq. A senior U.N. official said Ukraine needs about 10 days to prepare the ports and needs time to “identify and be clear about those safe corridors.” The aim is to export 5 million tons of grains per month to empty Ukraine’s silos in time for this year’s harvest.

Zelenskyy said nearly 20 million tons of grain will be exported initially, then some of the current harvest.

Guterres first raised the critical need to restart the supply of Ukraine’s agricultural production and Russia’s grain and fertilizer to world markets in late April during meetings with Putin in Moscow and Zelenskyy in Kyiv, then proposed a deal because of fears that the war could worsen hunger for up to 181 million people.

Peter Meyer, head of grain and oilseed analytics at S&P Global Platts, said the deal does not “mean that the global supply crisis is over.”

Traders anticipated a deal for the past several weeks, he said, so its effect might already have shown up in grain prices. And the agreement only covers the 2021 crop. There’s still considerable uncertainty about Ukrainian production this year and even next, Meyer said.

Before the agreements, Russian and Ukrainian officials blamed each other for the blocked grain shipments. Moscow accused Ukraine of failing to remove sea mines at the ports, insisted on checking incoming ships for weapons and lifting restrictions on Russian grain and fertilizer exports.

Ukraine argued that Russia’s port blockade and launching of missiles from the Black Sea made any safe sea shipments impossible. It sought international guarantees that the Kremlin wouldn’t use the safe corridors to attack Odesa and accused Russia of stealing grain from eastern Ukraine and deliberately setting Ukrainian fields on fire.

Volodymyr Sidenko, an expert with the Kyiv-based Razumkov Center think tank, said Ukraine apparently did not raise the issue of stolen grain in the negotiations.

“It was part of a deal: Kyiv doesn’t raise the issue of stolen grain and Moscow doesn’t insist on checking Ukrainian ships. Kyiv and Moscow were forced to make a deal and compromise,” he said.

The deal was also important for Russia’s geopolitical relations, the analyst noted.

“Russia decided not to fuel a new crisis in Africa and provoke a hunger and government changes there,” Sidenko said. “The African Union had asked Putin to quickly ease the crisis with grain supplies.”