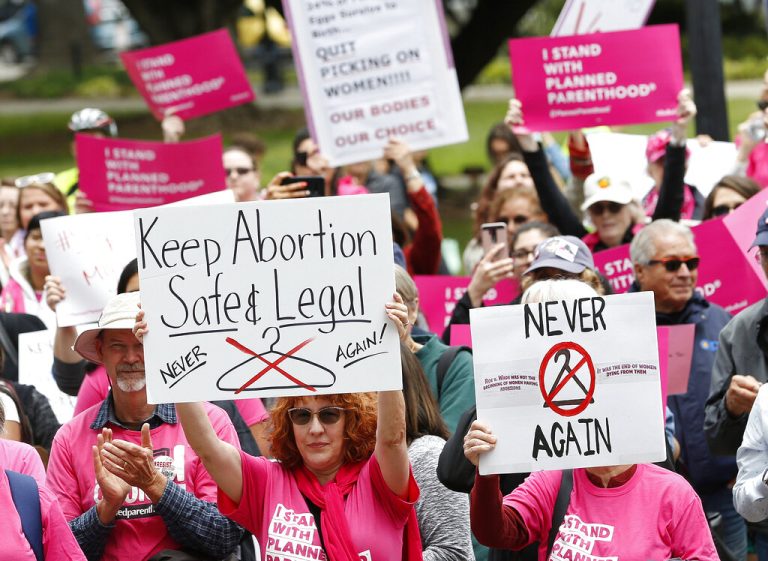 Arizona lawmakers split on party lines Friday as the House passed a pair of bills guaranteeing a right to an abortion, exactly three weeks after the Supreme Court overturned that right.

The “Women’s Health Protection Act of 2022″ would codify the right to an abortion that the Supreme Court recognized in its 1973 ruling in Roe v. Wade, the case it overruled last month.

The “Ensuring Access to Abortion Act of 2022″ would block state efforts to keep patients from crossing state lines for abortion services, and protect the availability of abortion pills and other drugs that terminate pregnancies.

The bills now head to the Senate, where experts say the chance of passage is slim.

“These bills have passed in the House but will remain in the House and will not pass in the Senate,” said Emma Waters, a research associate at Heritage Foundation. “Especially with the pro-life advocacy groups rallying around these bills and helping their elected leaders understand the consequences of this and also moving public opinion.”

The votes come as many states have outlawed abortion after the Supreme Court said the decision should be left to state legislatures, and other states – including Arizona – are moving in that direction.

Arizona Attorney General Mark Brnovich on Wednesday asked the Pima County Superior Court to lift the 1973 injunction against a state abortion ban that has been in place since Roe was handed down. If that injunction is lifted, it would reinstate a 1901 law that bans all abortions in Arizona, except in the case of medical emergencies.

Even without that action, however, all abortions in Arizona have currently been halted. Health care providers said they had to suspend abortions while they figure out the impact of the Supreme Court’s ruling last month.

“The overturning of Roe v Wade is already having devastating consequences in Arizona, where our health centers have had to make the difficult decision to pause all abortion care until our elected officials clarify the state’s laws,” said Brittany Fonteno, president and CEO of Planned Parenthood Advocates of Arizona, in a statement Friday.

With abortions outlawed in some states, clinics in states where the procedure is still legal are bracing for an increase in patients – and some state lawmakers are looking at ways to penalize those who cross state lines for abortion services, as well as anyone who aids them.

Those travel bans, as well as state attempts to prohibit the importation of abortion medications, would be prohibited by the abortion access bill that passed the House 223-205, with three Republicans joining all 220 Democrats in support of the bill.

“Basically, what this is saying is that abortion pills can be shipped nationally. There would be even fewer ways to regulate where abortion pills were being sent and whether or not that was violating the pro-life laws in that state,” said Waters, who scoffed at the notion that states could enact travel bans.

“Republican state lawmakers in states like Arizona are in the midst of an all-out assault, already implementing, or trying to implement, oppressive and draconian laws to control women’s bodies,” he said in a statement. “While women already have the constitutional right to travel freely in this country, we must now ensure the far-right does not try to undermine that right.”

The more sweeping measure was the Women’s Health Protection Act, which codifies the abortion guarantees in Roe and expands them, prohibiting limits on telemedicine and abortion medications, for example, and barring excessive regulations and procedures for patients seeking an abortion.

That bill passed 219-210, with one Democrat from Texas joining 209 Republicans in opposition to the bill.

All five Arizona Democrats in the House voted for the bills, while the state’s four Republican representatives all opposed them.

Rep. Debbie Lesko, R-Peoria, took to the House floor Friday to say Republicans’ opposition is based on the fact that they “care about women and babies.”

“My colleagues across the aisle are unfortunately once again attempting to push their abortion-on-demand agenda, which most Americans find appalling,” Lesko said. “This bill is beyond extreme.”

But Arizona Democrats applauded the bills they say will give reproductive health care control back to individuals, a constitutional right enjoyed for almost 50 years until last month.

“The Supreme Court’s ruling, rolling back 50 years of precedent, and a haphazard legal effort to enforce a pre-statehood total abortion ban have left Arizona doctors, family planning providers, and patients in limbo as private health care decisions are debated in the state court system,” said Rep. Tom O’Halleran, D-Sedona, in a statement.

O’Halleran said Americans should be free “to make personal health care decisions that impact their lives, health, and futures,” and he called on the Senate to act quickly on the bills and send them to the president for his signature.

But the bills would likely face a filibuster in the Senate, a blocking tactic that takes 60 votes to break. With the Senate currently divided 50-50 between Republicans and Democrat – and moderate Democrats like Arizona Sen. Kyrsten Sinema refusing to end the filibuster – chances of final passage are slim.

Grijalva said it is time for the Senate to “do away with archaic filibuster rules, and finally pass abortion protection laws that have been languishing in their chamber at the expense of millions of women.”

Fonteno said that lawmakers who oppose the House bills “do not represent the interest of Arizonans,” and that the majority of Arizona voters support the right to an abortion. If lawmakers do not act now, she said, they will have to answer to those voters in November.

“Planned Parenthood Advocates of Arizona will not back down and in November, voters will remember,” Fonteno said.