Despite Supreme Court OK to end it, ‘remain in Mexico’ remains for now – Cronkite News 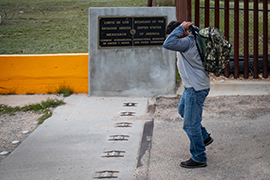 Photo: A migrant heads back to Mexico after being stopped by Border Patrol near Sasabe in March 2020

Advocates waiting for the Biden administration to end the “remain in Mexico” immigration policy could be waiting weeks, or more, despite the Supreme Court ruling last month that the administration has the authority to do so.

Homeland Security Secretary Alejandro Mayorkas said last week that his agency has to wait for the high court’s 5-4 ruling to be “actually communicated to the lower court” before the administration can end the program, a process he said could take “several weeks.”

In the meantime, migrants are still subject to the Trump-era policy that forced thousands of asylum seekers to wait in Mexico while their claims were processed, a policy one advocate called a “humanitarian disaster.”

“Every day that someone remains in Mexico rather than seeking asylum in the United States, they are putting their life at risk because it is such a dangerous part of the world,” said Kate Melloy Goettel, director of litigation at the American Immigration Council.

“Acting quickly to unwind ‘remain in Mexico’ is critical to ensure the safety of those asylum seekers,” she said.

Experts are confident that this administration will end the program – even if that end does not come as quickly as advocates want.

“I think it’s very clear that it will be lifted and the Biden administration will be allowed to terminate the program, but it’s just a matter of crossing those legal t’s and dotting the i’s,” said Jessica Bolter, an associate policy analyst for the Migration Policy Institute.

The remain in Mexico policy – officially known as the Migrant Protection Protocols – were implemented in January 2019 by then-President Donald Trump, invoking a section of immigration law that let border officials send asylum seekers back to Mexico if there was not capacity to detain them in the U.S.

Critics said that exposed migrants to violence and illness in makeshift camps south of the border where they waited for their claims to be processed. Goettel said there have been “many, many documented cases of violence” against migrants in those situations.

Biden pledged to do away with the policy, and on his first day in office he directed Mayorkas to review the program. Mayorkas reported in June 2021 that the program should be ended, finding that it did not improve border management, siphoned off resources and strained U.S. relations with Mexico.

That ruling was upheld by a federal circuit court, which rejected a second memo by Mayorkas, in October, as merely justifying the earlier decision without properly reviewing it.

But the Supreme Court ruled 5-4 on June 30, in its final decision of the term, that the administration was within its rights to end the program. It also said the lower courts were wrong to reject the October memo out of hand.

The district court still needs to formally lift the injunction it imposed last year in order for the administration to end the policy, however. Goettel said there is normally a 28-day period before the court decision becomes binding on an agency.

Until DHS is legally allowed to end the policy, “we are obligated by the district court’s ruling to continue to implement the ‘Remain in Mexico’ program,” Mayorkas said. “And we will do so in accordance with law.”

That may not be the end of the legal fight, however. Bolter said Texas and Missouri could still challenge the validity of the October memo when the case goes back to the lower court, but she does not expect it will keep the administration from ending the program for now.

It comes as border apprehensions are at the highest level in decades, with more than 1.5 million migrants stopped at the southern border in the first eight months of fiscal 2022, according to the most recent numbers from Customs and Border Protection. Of those, 385,631 were stopped in Arizona, the agency said.

But numbers subject to MPP have been much lower, with just 4,180 returned to Mexico so far this year, said DHS, which has been working to wind down the program even as it was under court order to keep it in place. Even at its height under Trump, the program never “enrolled” more than 2,300 migrants in a month.

It is unclear what will happen if the program ends, and how those currently in Mexico can go about returning to the U.S. Bolter said those questions will likely be answered only after the injunction is lifted and DHS can formally end the program.

Despite the legal proceedings and delays, advocates are “encouraging that process to happen as quickly as possible,” Goettel said. “(So) people who are waiting in Northern Mexico all this time can come back in.”

Still, “they’re probably not putting anybody else into MPP at this time,” said Andrew Arthur, fellow in law and policy at the Center for Immigration Studies. While the “Biden administration tomorrow could decide that it wants to do MPP on its own … I don’t think that’s going to happen.”

“I think it’s likely that it will end,” she said. “As things stand now, yes, it will be terminated.”