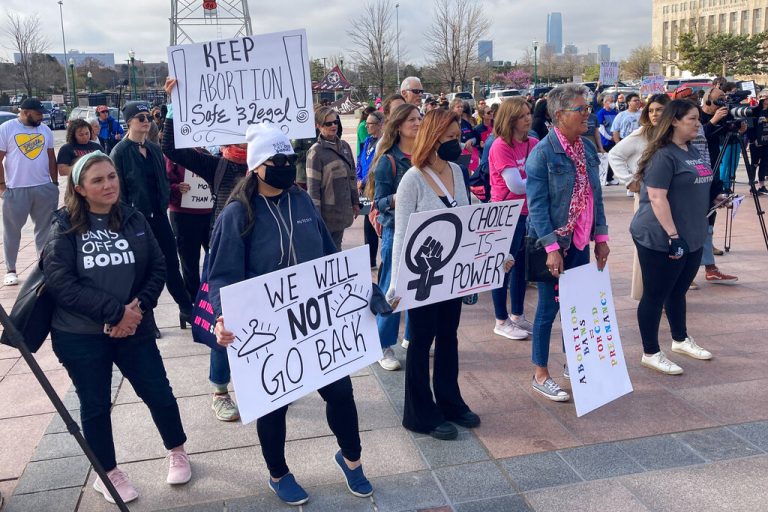 President Joe Biden issued an executive order Friday aimed at protecting abortion access, even as he called on voters to turn out this fall and “reclaim the rights … taken from them” by the Supreme Court.

A sometimes-emotional Biden attacked the court’s “wrong-headed” decision two weeks ago to overturn Roe v. Wade, the 1973 ruling that recognized a right to an abortion. He said the court’s reasoning in Dobbs v. Jackson Women’s Health was “just wrong,” and “frozen in time in the 1860s, when women didn’t even have the right to vote.”

“That wasn’t about the Constitution or the law,” Biden said. “It was about a deep, long-seething antipathy towards Roe and the broader right to privacy.”

That ruling has already led to abortion being outlawed in a dozen states with lawmakers in many more – including Arizona – taking steps to make abortion illegal. Biden said the fastest way to restore Roe would be to elect lawmakers who will codify the right to an abortion, a bill he would “sign immediately upon its passage.”

“This fall, Roe is on the ballot. Personal freedoms are on the ballot. The right to privacy, liberty, equality, they’re all on the ballot,” said Biden, adding that the ruling in Dobbs “practically dares the women of America to go to the ballot box and restore the very rights they’ve just taken away.”

Arizona lawmakers this year approved a law that would ban abortions after 15 weeks – the previous threshold was about 26 weeks – but even that is now too liberal in the wake of the Supreme Court’s ruling.

Arizona Attorney General Mark Brnovich said he will take action to restore a 1901 territorial law, still on the books but on hold since Roe came down in 1973, that outlaws all abortions except in a medical emergency. Brnovich’s office is also defending a separate state law that would ban abortions that are based on genetic abnormalities of the fetus.

While Biden called on voters to rally behind Roe, abortion opponents in Arizona said the Supreme Court was right to reverse abortion rights.

“The Supreme Court was clear that abortion law belongs to the people as represented by their elected officials,” said Cathi Herrod, the president of the Center for Arizona Policy.

Her statement called Biden’s executive order an abuse of power that attempts “to allow abortion on demand up until the moment of birth. It’s another extreme measure not supported by Americans.”

Abortion-rights groups, on the other hand, called the executive order a “first step.”

“President Biden’s executive order to safeguard access to reproductive health care, including abortion care, is an important first step in restoring the rights taken from millions of Americans by the Supreme Court,” said NARAL Pro-Choice America President Mini Timmaraju in a statement released before the order was signed.

Abortion-rights groups in Arizona did not immediately respond to requests for comment Friday.

Biden’s action came one day before organizers from the Women’s March were set to march to the White House for a “calling of rage” rally to demand that Biden take action in the aftermath of the Dobbs decision.

The executive order signed Friday aims to safeguard access to contraceptives and to medication abortions, to educate both patients and physicians about their rights and responsibilities, and to ensure the safety of reproductive health care services.

The order also calls on the Federal Trade Commission the Health and Human Services Department to crack down on the sharing of private health data, amid fears that online searches for abortion information or geographic location data could be used against an individual. And it orders the Justice Department to call on volunteer lawyers to defend patients’ rights to cross state lines for abortion services or reproductive health care.

Biden said the court’s ruling will have real and immediate consequences, with state laws already taking effect that are “jeopardizing the health of millions of women, some without exceptions.”

His voice rose as he cited the recent case of a 10-year-old in Ohio who got pregnant after being raped, but was forced to cross state lines for an abortion. Ohio is one of the states with a trigger law that kicked in after Roe was overturned, replacing it with a law “so extreme that women could be punished for protecting their health, so extreme that women and girls are forced to bear their rapist’s child.”

“She was forced to have to travel out of the state to Indiana to seek to terminate the pregnancy and maybe save her life,” a visibly emotional Biden said.

But Biden said there is only so much he can do as president, that it is up to Congress to restore abortion rights by codifying Roe, and up to voters to elect the lawmakers who will do that.

“Congress must act. And with your vote, you can act,” he said. “You can have the final word. This is not over.”

Rep. Andy Biggs, R-Gilbert, said in a statement that the executive order goes too far. He said the order “to preserve the heinous practice of abortion is nothing more than a move to try and appease the radical left’s pro-abortion supporters.”

But Rep. Raul Grijalva, D-Tucson, welcomed the order – and called for more.

“At a time when states continue their assault on women and health care providers, President Biden’s actions will save lives,” Grijalva said in a statement Friday. “I call on the administration to continue to build upon this executive order to ensure safe pathways for women to seek the medical care they choose.”