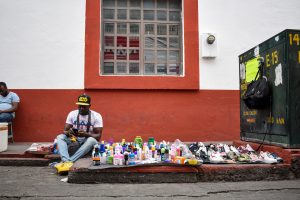 Martin Nore sells odds and ends – baseball hats, a stock pot, a blender – in front of a memorial dedicated to Benito Juarez, Mexico’s first Indigenous president, while he waits for documents that would allow him to continue his migration north.

The Haitian’s journey to the United States has been stalled in southern Mexico for nine months. To survive while waiting for his Mexican papers, Nore is selling what he can without a permit, which draws the scrutiny of government inspectors and the ire of local vendors, who must pay for business permits.

But Nore, 40, says he has little choice. No one will hire him.

“When I walk into a store here and ask about work, they say, ‘No, no, no, I don’t work with Haitians!’” Nore said, standing near his makeshift storefront in Parque Central Miguel Hidalgo, in downtown Tapachula.

In addition to his sales, Nore depends on money sent to him by family members in Haiti. Their ultimate goal is to fund his migration to the United States so that once there, Nore can find work to in return support them through remittances – money sent across national borders, usually by wire transfer.

Nore saves what he makes from his business, and when he doesn’t have enough to pay for more merchandise, his father in Haiti sends him money. A transfer during a weekend in March allowed Nore to nearly triple his inventory.

Even with this help, Nore struggles financially, although he noted the local economy clearly benefits from the migrants who have flooded into Tapachula over the past few years.

“We (migrants) come here, we spend money. If someone’s relative or friend sends us money, we spend it here,” he said.

For the estimated 30,000 migrants scattered around Tapachula who are waiting to continue their migration journeys, there are the limited avenues for survival – selling goods without a permit, joining the long lines of people seeking government assistance or collecting remittances from home.

Remittances have long been crucial to the foreign direct investment of developing countries – representing about 45% of financial flows entering those countries globally, according to a 2020 article in Southern Economics Journal from researchers at Texas A&M.

As in Nore’s case, money from remittances flows in both directions – from home to help the migrants on their way, then from the migrant back to home once they’re established in their new country. These money transfers are big business for the places where they are received, a boon to local and national economies alike.

Remittances are increasingly vital to economies throughout Latin America and the Caribbean. The World Bank reported that remittances to countries in those regions increased by 25.3%, to $131 billion, from 2020 to 2021.

In Tapachula, the effects on the local economy have been explosive.

From 2020 to 2021, remittances sent into Tapachula doubled from $20 million to just more than $41 million, according to DataMexico, which is a joint project between Mexico’s Secretary of Economics, Banco de Mexico and Datawheel. Additionally, remittances make up nearly 4% of Mexico’s overall GDP, according to the Wilson Center, a research institute.

“Basically, decisions on how to migrate, when to migrate and where to migrate are (decided) by … economic differentiation … and the incentive to improve your life by leaving,” said Raul Hinojosa-Ojenda, a professor of economy and Latin American migration at UCLA.

But sending and receiving money on the individual level isn’t cheap or easy. In Tapachula, migrants wait hours in lines to get money from home, only to be turned away for lack of verification, bureaucratic delays or simply because the offices ran out of money.

For migrants like Nore, remittances are measured in small increments – enough to get a business going or save up to bring their families to join them.

And while Tapachula’s economy grows from remittances, municipal inspectors force Nore and other migrant vendors off the street for selling goods without a permit multiple times a day.

Near Nore’s space, five or six vendors are peddling their wares on the same streets around the park. On a narrow road behind them are dozens more merchants selling produce out of wheelbarrows, trying to operate in less visible areas of the park.

Nore’s merchandise is neatly lined up on a black tarp, ready to be scooped up at a moment’s notice if municipal workers try to shut him down.

A vendor nearby barters in Spanish; the seller next to Nore speaks Creole. Elsewhere in the city, the diversity among migrants is seen in the parks, heard on booming speakers in passing cars and in smells wafting from different foods prepared and sold in the many markets intertwined among Tapachula’s aged architecture.

On a humid March afternoon, Nore is approached by a half-dozen municipal workers, wearing tan vests with black patches on their breast pockets reading “Inspector.” They speak to one another and to Nore, and their tone switches from serious to jovial when they notice journalists’ cameras and microphones. They soon leave.

Nore said local officials should let migrants earn a living while waiting for documents that will permit them to continue north.

“We immigrants do good here,” he said. “Spending money in this economy. It works. But we have passed through a lot of misery. And they don’t help us.”

About 90% of remittances are sent in the form of cash, but high transfer fees – an international transfer through Western Union costs $45 or about 940 pesos – diminish the amount that can be sent.

More problematic is what Hinojosa-Ojeda at UCLA calls a lack of local investment opportunities, so the remittances are used to launch more migrant journeys.

“When you send a lot of cash back to villages, where there are no banks, no mechanism for saving the money – most remittances are used to finance more people leaving because that’s the best return on your money,” Hinojosa-Ojeda said.

Businesses that process wire remittances frequently have limited amounts of cash on hand, so customers who line up early usually are in a better position to receive their money. But there’s no guarantee, and more time waiting in line means less time looking for work, securing documentation or tending to a business.

Claudia Matute, a legal resident of Mexico who’s originally from Honduras, is living solely on remittances while she waits for her daughter to be released from Siglo XXI in Tapachula – Mexico’s largest immigration detention facility. She said her daughter, Genesis Graciela, who’s also from Honduras, has been detained for 15 days for illegally crossing into Mexico in order to join her mother.

To get her money, she joins migrants in similar straits lining up, at least one day a week, outside Coppell – which processes money transfers – in Parque Central Miguel Hidalgo. Coppell employees step out onto a cobblestone walkway, moving down the snaking line of 20 to 30 men and women, handing out vouchers to those who will get their money. The last one goes to the man directly in front of Matute.

Through tears, she starts sending texts and voice messages on her phone.

“They should have a special bank for (migrants) so that they are not struggling,” Matute said. “They can’t keep up because the demand from foreigners is too high.”

Elektra, another money transfer business, also was low on cash that morning, she said, adding that it’s wrong to be denied cash that’s sent legitimately.

Sadio Ansou, a Senagalese migrant also waiting at Coppell to pick up a large wire transfer from his brother, said he wants to establish roots in Tapachula, but money transfer businesses either don’t have enough money on hand or won’t accept his transfer documents.

“I want to buy a house,” Ansou said, pulling a tattered handwritten document displaying his money order information from a plastic multicolored folder.

He won’t get his wire transfer on this day, and he isn’t sure he ever will.

Like many migrants awaiting documents, Ansou can’t find work or provide for himself. Wire transfer difficulties compound his desperation.

For Nore, Ansou and Matute, economic stability is day-to-day or week-to-week. Nore hopes to make it farther north to secure a more viable way to make a living, with long term goals of bringing his family to the United States from Haiti.

He says that he and two other people pay 4,000 pesos a month for a small apartment near the center of Tapachula. That’s nearly $200, in a country where the average minimum wage for legal workers is $7.50 a day.

Despite his struggles, Nore said he doesn’t consider Tapachula an “open-air prison,” as some migrants and officials call it. But he blames U.S. politicians for turning a blind eye to the issues in Tapachula and in Haiti, the poorest country in the Western Hemisphere.

Until the international focus changes, Nore and other migrants will continue to peddle their goods on the street, queue up at daybreak to receive remittances or government assistance, and continue to wait for the Mexican government to issue travel documents.