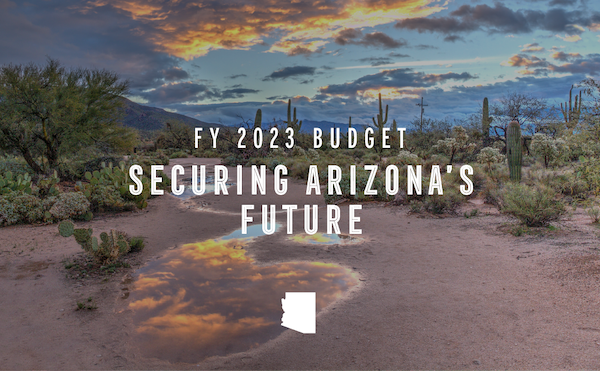 Governor Doug Ducey signed the Fiscal Year 2023 budget, a responsible package that pays down debt, secures our future and lays the foundation for even more growth — all while investing in the areas that matter most to Arizonans.

“This landmark, bipartisan budget makes historic investments to secure Arizona’s future,” said Governor Ducey. “We’re making fiscally-responsible decisions and targeted commitments that will leave a legacy long after this administration. With dollars to secure our border, record-investments in K-12 education, and significant infrastructure funding to pave the roads of tomorrow ⁠— this budget truly delivers for Arizonans. And it does so, while providing tax relief to our citizens, paying off debt, and topping off the state’s Rainy Day Fund. I’m grateful to all of the state lawmakers who put in the work to deliver a budget for all Arizonans. Many thanks to the legislative leaders and appropriations chairs for their unwavering leadership and support.”

This year’s budget makes major improvements to Arizona’s K-12 education system, including the most significant yearly increase in the last eight years. With an additional $1 billion in year-over-year spending, total K-12 spending for this year is $8.45 billion. As per pupil funding surges, Governor Ducey said in a signing letter, “the classroom is exactly where this new funding should be directed by each school’s governing board.”

Arizona’s budget continues Governor Ducey’s track record of taking action and supporting efforts to secure the border. With a $544 million investment in the Border Security Fund, Governor Ducey is delivering on a promise from his January State of the State that if Washington, D.C. will not do its part to secure our border, Arizona will.

The budget also delivers on other issues that matter most to Arizonans. Through historic investments, the plan enhances public safety and state trooper pay, expands a vital portion of I-10, catalyzes the modernization of the State Parks system, pays down debt, saves for the future, and helps Arizona families keep more of their hard-earned money.

To sustain a growing Arizona, the budget includes the largest investment in state history in strategic transportation initiatives. Governor Ducey wrote in a signing letter that these investments will sustain Arizona’s incredible economic growth.

To ensure every dollar spent is useful to Arizonans, the governor also line-item vetoed the following appropriation of the budget: House Bill 2862, page 85, lines 33 and 34. In a letter, the governor said, “This appropriation however has little support from the public and veteran community.”

Highlights of the fiscally responsible budget include: