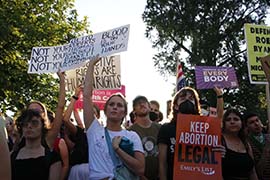 Photo: Abortion opponents argue that a 1901 law criminalizing abortion in Arizona is back in effect, now that abortion is no longer recognized as a constitutional right. But abortion-rights advocates say it will require legal action to restore that law. (Photo by Daisy Gonzalez-Perez/Cronkite News)

The Supreme Court decision Friday to eliminate a constitutional right to an abortion has “unleashed chaos” for abortion providers in Arizona, where there is little agreement on where the law stands now.

The resulting “substantial uncertainty” has led to the suspension of almost all abortion services in the state. Acacia Women’s Center in Phoenix confirmed Monday that it is still offering abortion services, but every other abortion provider in Arizona, including Planned Parenthood clinics, had either closed or suspended its abortion services out of concern.

Dr. DeShawn Taylor, owner of Desert Star Family Planning in Phoenix, has said that she still wants to provide care, but “has no interest in going to jail for trying to help people.” She pointed to one law still on the books that makes it illegal to help someone procure an abortion, but does not specify what that means.

“Does that mean I can’t specifically say go to this clinic cause they can help you? Does that mean I’ve done a consultation for you already and I can’t personally send your records from my clinic to theirs because I would be helping you procure the abortion?” Taylor asked.

The uncertainty arose after the Supreme Court ruled Friday that its landmark 1973 decision in Roe v. Wade, which recognized a constitutional right to an abortion, was wrong and had to be overruled. Roe had blocked many state restrictions on abortion, but the court returned the power to state legislatures.

“Now that Roe is overturned and it’s up to the state, the pre-Arizona law that prohibits abortion, except to save the life of the mother, should be enforceable,” Cathi Herrod, president of Center for Arizona Policy, an anti-abortion advocacy group, said Monday.

She was referring to a 1901 territorial law criminalizing abortion.

But even with Roe gone, the American Civil Liberties Union of Arizona said the 1901 law cannot take effect without court action first to lift an injunction that was imposed in 1973 after Roe was handed down by the Supreme Court.

“We think that some action would have to be taken to lift the injunction before any county attorney is able to enforce those old bans,” said Jared Keenan, legal director for the Arizona ACLU.

His organization joined other abortion-rights advocates in a lawsuit Saturday to block another Arizona law, the 2021 measure that grants “personhood” to a fetus. Keenan said that law is too vague and could conceivably be used to charge a physician, not for performing an abortion, but for assault or any other number of crimes against a “person.”

“That level of confusion is the reason why … most, if not all, providers in Arizona have suspended abortion services, because they’re afraid a county attorney could attempt to charge them criminally under any number criminal statutes,” Keenan said.

While Herrod said the 1901 ban is in effect, and Keenan said it isn’t, Arizona Attorney General Mark Brnovich said Friday that another law passed this year, banning abortions after 15 weeks of pregnancy, will take effect this fall.

There have been no reports so far of any enforcement action against organizations providing abortion services or people seeking them, but the ACLU of Arizona said it is taking precautionary steps.

County attorneys who could be contacted Monday provided little clarity on what law would take precedence.

When asked if it would soon enforce an abortion ban, the Pima County Attorney’s Office deferred to the Arizona Attorney General’s office in an email Monday. But a spokesperson for Brnovich said that county attorneys have primary jurisdiction until “we’re done with our legal analysis.”

“Our office is engaged in an ongoing litigation in federal court where the Ninth Circuit (Court of Appeals) has requested us to formally weigh in on this very issue,” said Brittni Thomason, the spokesperson. “We anticipate filing a legal brief next week.”

Maricopa County Attorney Rachel Mitchell said her office has not received any cases from police related to abortion laws. If it gets a case, she said in an emailed statement, “this office will apply our ethical charging standard of a reasonable likelihood of conviction when deciding on whether charges should be filed.”

While she expects legal challenges to Arizona abortion laws, Mitchell said that “important legal review will take time and any such rulings will guide decision-making on these matters.”

For now, the ACLU of Arizona says that “abortion remains legal,” according to a statement it released Friday, but it also understands that “there is just too much confusion for providers to take on this risk until there is clarity from the courts.”

While she is not currently providing abortion services, Taylor said she’s thankful her clinic is still open for services such as birth control, sexually transmitted infection testing and treatment, gender-hormone therapy and exams for acute gynecology issues.

Keenan said advocates will continue to fight for the right to provide abortion services.

“We will continue to explore every legal avenue available to defend abortion access in our state,” he said.