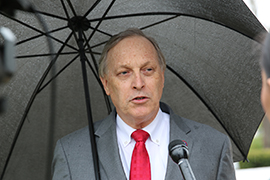 Rep. Andy Biggs, R-Gilbert, this week denied he sought a pardon from then-President Donald Trump for any part in connection with the Jan. 6 assault on the U.S. Capitol.

Biggs – who has refused to cooperate with a subpoena from that committee – called Hutchinson “mistaken” in her testimony, which he said was “deceptively edited to make it appear as if I personally asked her” for a pardon. Biggs did not respond to requests Friday to elaborate on that denial.

But Rep. Adam Kinzinger, R-Ill., the committee member leading Thursday’s questioning, noted at the end of more than two hours of testimony that the only reason someone would request a pardon is “because you think you have committed a crime.”

But the final section turned to the question of lawmakers who reportedly approached the White House seeking preemptive pardons for their part in the Jan. 6 attack.

That included excerpts from a Jan. 11 email to the White House from Rep. Mo Brooks, R-Ala., in which he requested a blanket pardon for unnamed members of Congress. including “every Congressman and Senator who voted to reject the Electoral College vote submissions of Arizona and Pennsylvania.”

It also included the Hutchinson video in which she named several House Republicans, including Biggs and Reps. Matt Gaetz of Florida and Louie Gohmert of Texas, who reached out for pardons from the White House.

Biggs spent much of his response Thursday attacking the “unAmerican January 6 Committee” for “selective leaks” and witnesses appearing “without cross-examination or advance disclosure of evidence.” He called the suggestion that he was among those seeking a pardon a “false allegation.”

“To the extent Cassidy Hutchinson, a former White House staffer, believes I requested a presidential pardon, she is mistaken,” Biggs said in a statement posted on Twitter on Thursday.

The committee in May had asked Biggs to appear to talk about his “participation in meetings, both in person and at the White House … regarding various aspects of planning for January 6th.” That included a Dec. 21 White House meeting with members of the conservative House Freedom Caucus that was the subject of Brooks’ later email request for blanket pardons.

Biggs, who has denied being part of the planning for Jan. 6, refused to appear before the committee and later refused to comply with a subpoena.

Biggs was the only Arizonan named in testimony as seeking a pardon, but he is not the only one who has been subpoenaed by the committee. It has also issued subpoenas to Arizona Rep. Mark Finchem, R-Tucson, and Arizona Republican Party Chairwoman Kelli Ward to interview them about their part in Jan. 6.

Despite the spotlight the hearings have turned on him, it remains to be seen what effect, if any, they will have on Biggs’ political fortunes this fall. Analysts said he is in a safe Republican district and likely to be re-elected.

“Among Republican primary voters, I think it’s a net good to be seen as if you’re fighting for the president,” Jacob Rubashkin, a reporter and analyst at Inside Elections. “This is a guy who’s running in a very Republican district … This is not the kind of thing that hurts you in a primary.”

Aaron Marquez, executive director of Vets Forward, said Biggs has a right not to comply with the subpoena, but he said that until Biggs sits down and answers the committee’s questions in an honest and serious way, “he looks guilty.”

“Why would anyone ask for a pardon if they didn’t do anything wrong?” Marquez asked.

Marquez and Kinzinger were echoed by Signa Oliver, a board member of Vets Forward and a former special assistant U.S. attorney in Georgia.

“If Mr. Biggs did not commit a crime, he would not need a pardon,” Oliver said. “Full stop, we’re done,”